What his disastrous interview with Parade tells us: He's bad -- really, really bad -- at running for president 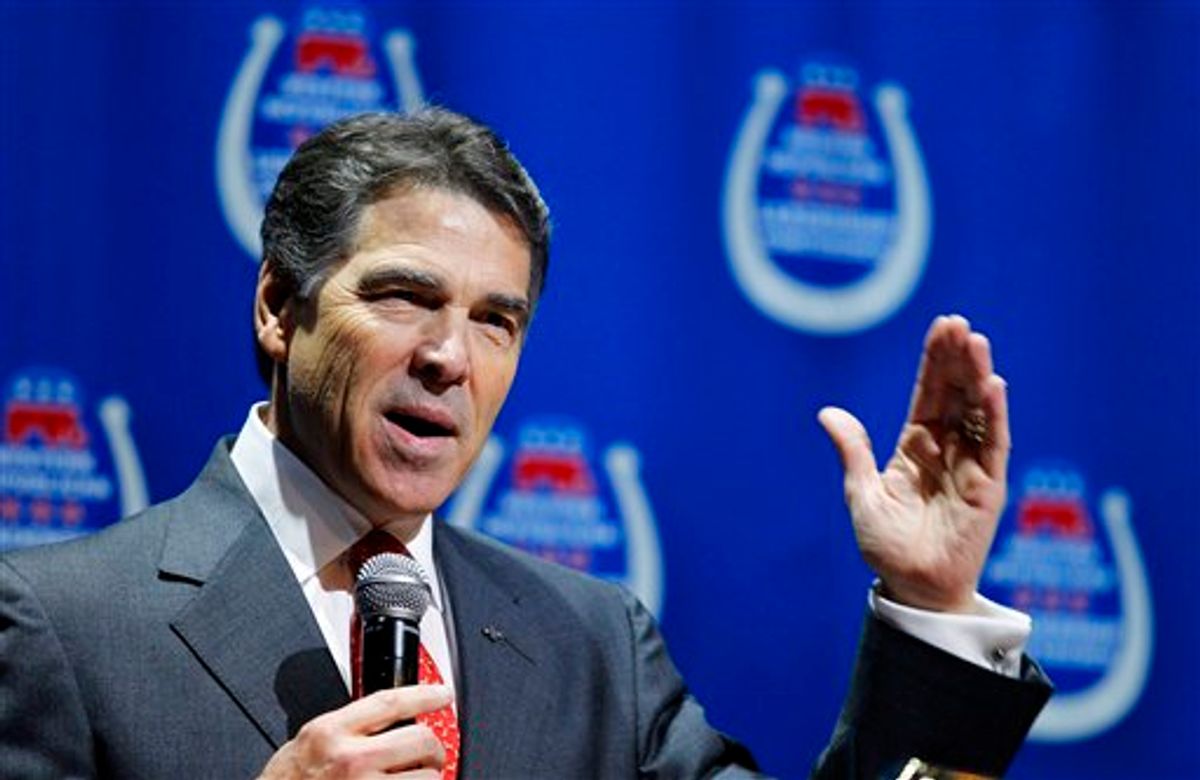 There are some interview venues that have obvious potential to force a presidential candidate into some kind of a revealing slip-up. "Meet the Press" comes to mind here. Parade, the devoutly Middle American magazine that comes free with more than 500 Sunday newspapers, doesn't.

And yet, Rick Perry managed to make a real mess of a lengthy Q&A that ran in the magazine this weekend, telling interviewer Lynn Sherr (a former ABC journalist) that he doesn't have a "definitive answer" about whether Barack Obama was born in the United States and suggesting that the long-form birth certificate the president released in the spring might not be authentic. Here's the relevant portion:

Governor, do you believe that President Barack Obama was born in the United States?
I have no reason to think otherwise.

That’s not a definitive, “Yes, I believe he” —
Well, I don’t have a definitive answer, because he’s never seen my birth certificate.

You don’t believe what’s been released?
I don’t know. I had dinner with Donald Trump the other night.

And?
That came up.

And he said?
He doesn’t think it’s real.

And you said?
I don’t have any idea. It doesn’t matter. He’s the President of the United States. He’s elected. It’s a distractive issue.

What could Perry possibly be thinking going down this road? Well, several possibilities come to mind:

Whatever the explanation, Perry's handling of Sherr's question represents the latest and most glaring proof that he's just not good at running for president.

Flirting with birtherism has always been an awful play for a politician with national ambitions, an easy way to get yourself tagged as a fringe figure. This is why Obama actually did Republicans (like Boehner) a real favor when he put out his long-form, taking the question out of the national debate and freeing them from the fear of seeming like Obama apologists to their base. Even a presidential candidate with mediocre political instincts should be able to recognize the trouble that will come from saying anything except "Yes, he was born here -- next question, please" to a query about birtherism. If Perry were to somehow win the GOP nomination, this is exactly the sort of thing that Democrats could use to scare swing voters away from him.

But it also hurts him within the GOP, no matter how intensely the party's base dislikes Obama. That's because there's a filter between  presidential candidates and the base: influential, opinion-shaping "elites" -- activists, interest group leaders, elected officials, commentators, fundraisers and so on. And these elites are not interested in backing a candidate with self-destructive tendencies. That Perry has faded so badly in the polls this fall is a direct result of the skepticism and even hostility from GOP elites that his performance has provoked. Here, for instance, is how Ross Douthat characterized Perry's efforts as a candidate on Sunday:

The exception was supposed to be Perry, whose résumé and donor base both look at least somewhat presidential. But after watching him stagger through the debates, his tongue tied and his poll numbers cratering, it’s clear that a Republican Party that nominated the Texas governor for president would be deliberately cutting its own throat. And this is something that national political parties almost never do.

Now that Perry has taken up birtherism, GOP elites like Douthat have even more reason to believe that nominating him would be akin to cutting their own throats -- and to use their influence to make sure that he doesn't gain traction with the base.

We've seen this before, actually: It's what happened to Donald Trump during his fake presidential campaign, when Republican leaders recognized the black eye he was giving their party with his strong performance in some early polls. So they went after him, and not just (or even mainly) by ridiculing his birther crusade. Obama's long-form release came around this same time, so it's hard to know the exact impact of their attacks, but within weeks there were clear signs that Trump's support was fading and he soon ended his charade.