Read the fine print: The Iraq war isn't over

U.S. withdrawal leaves 5,000 mercenaries on the ground and the State Department's private air force in the skies 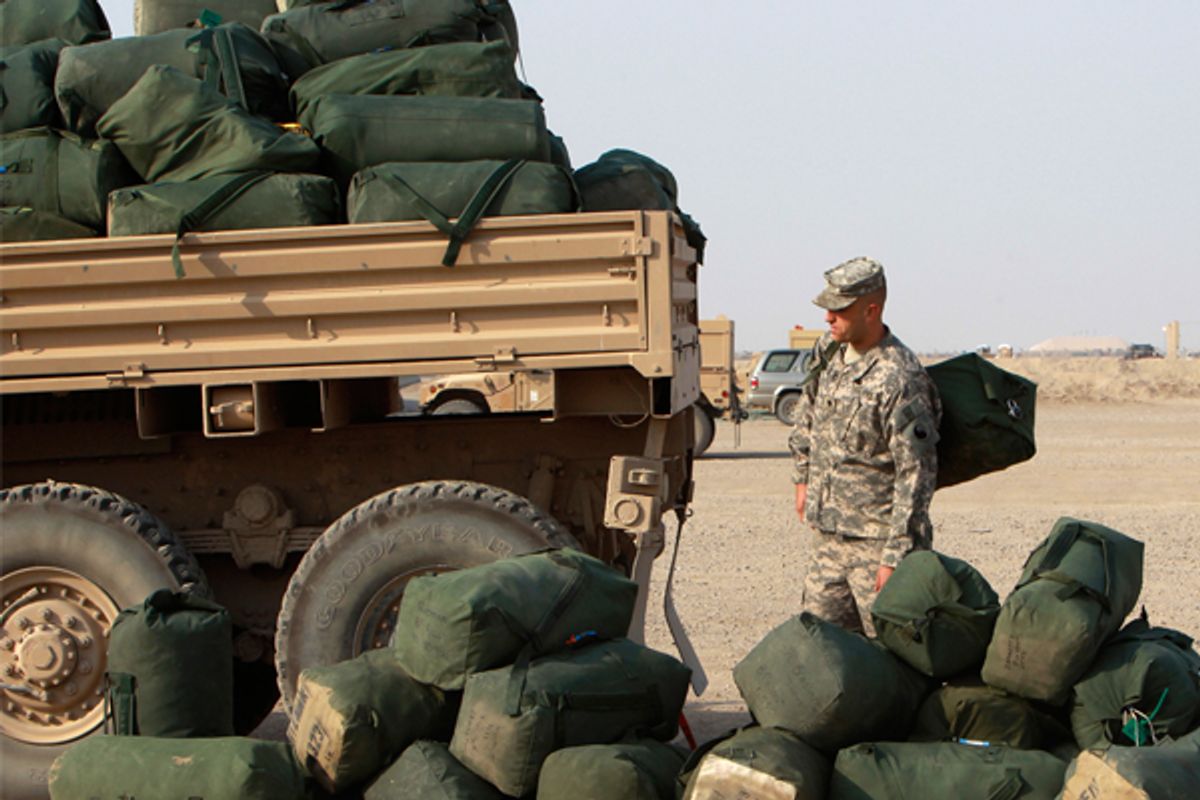 When President Obama stood at the podium of the White House briefing room on Friday to announce that all American troops would be departing Iraq by the end of 2011, the contrast with his predecessor was stark.

George W. Bush, of course, notoriously announced an end to combat operations in Iraq in 2003 aboard the USS Abraham Lincoln, with a banner displaying the words "Mission Accomplished." He spoke only hours after arriving on the aircraft carrier in a flight suit. That absurdly premature speech became the most infamous of his presidency, and it stands as one of the few things Bush has admitted to regretting.

Stylistically, the speeches by the law professor and the cowboy could not have been more different. Where Bush was militaristic, Obama was solemn. Where Bush was triumphalist, Obama was understated. And where Bush was clearly politically minded, no conceivable partisan trace could be found in Obama’s words.

But the parallel speeches announcing an end to the war in Iraq have one thing in common: They are both premature, and they are both at least somewhat misleading. Americans are likely to come away from Obama’s speech — and the headlines that parrot its contents — with the idea that the country will have left Iraq completely by Dec. 21, 2011. “After nearly nine years, America’s war in Iraq will be over,” Obama said. That is not the case.

In his contention that the war will be over by New Year’s Eve, Obama was making the (admittedly important) distinction between members of the U.S. military and everyone else employed by the American government. And indeed, there will not be a single American soldier stationed in Iraq by the end of the year.

Except, that is, for the approximately 150 troops that will stay to protect the huge U.S. Embassy compound in Baghdad. As that fact suggests, there is a lot of fine print underneath Obama’s declaration that the war is over. Besides those remaining troops, thousands of others officials in the American government will be staying in Iraq. There are the more than 5,000 security contractors hired by the State Department to guard the American presence. And there are the more than 10,000 other diplomats, the largest American diplomatic group anywhere on the planet. Those civilian workers form the full size of an Army division. The 104-acre embassy compound in Baghdad's Green Zone — the largest embassy anywhere in the world — has an astounding 21 permanent buildings. The State Department will also run its own air service — the 46-aircraft Embassy Air Iraq — and even its own hospitals.

For Iraqis, it might matter little that the huge number of Americans serving in their country are not official members of the U.S. military. “What really matters is what those civilian workers are doing,” says Stephen Walt, a foreign policy expert at Harvard.  “If there are armed troops conducting night raids and manning checkpoints, there may not be a substantial difference in their eyes” between official combat troops and "security contractors," who essentially act as mercenaries. On the other hand, if Iraqis feel like they are no longer occupied, they may see the Americans still in their country as simply allies acting at the request of their government. Even if American GIs are no longer stationed in Iraq in sizable numbers, the war will truly end only when Iraqis no longer believe themselves to be under an American thumb.

There is undoubtedly at least a symbolic importance to the departure of American troops. “The way in which Iraqis will spin it is probably to say ‘we threw foreigners out,’” says Walt. Paradoxically, that may leave the Iraqi government with an opening to ask Americans to redeploy troops to their country. Obama has left open the door to further training of Iraqi troops, and one American official told the New York Times that talks are always underway for U.S. troops to return to Iraq in 2012.

With Iraqi politicians now having established their nationalist bona fides by expelling American troops, asking them to once again operate in Iraq may be easier. Walt speculates that Obama’s announcement may be a bargaining ploy to ensure that American troops, if and when they are asked back, are permitted looser terms of engagement than Iraqi politicians were demanding in recent talks. Alternatively, Iraqis may ask Americans to boost up their civilian presence there even further, bringing more security contractors and diplomats to do what troops used to be doing. One thing is clear. The American military may be almost entirely gone from Iraq by the end of this year. But the American presence? That will be in Iraq for many years to come.