Why immigration won't go away in 2012 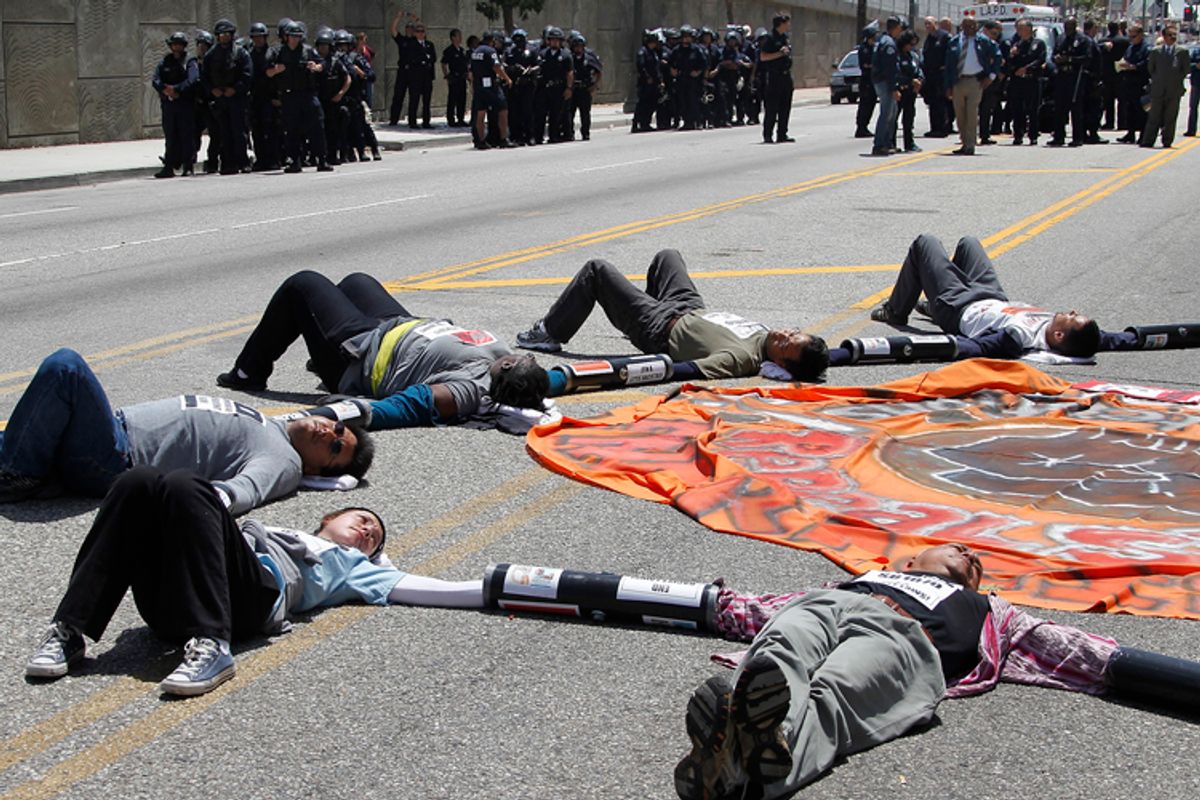 Protesters against Arizona's anti-immigration law SB 1070 lie on a street with their hands linked together. (Fred Prouser / Reuters)
--

According to the chattering classes, 2012 was supposed to be the election year when the “culture wars” of recent decades faded into unimportant skirmishes, as candidates and voters alike focused exclusively on economic and fiscal issues. But at least one culture war issue, immigration, has already shaken up the Republican presidential contest and is key to Barack Obama’s success in winning the Hispanic votes he desperately needs to get reelected.  With Congress missing in action, it is the battle over punitive new state immigration laws, in the legislatures and in the courts, that keeps this issue in the national spotlight.

The enduring potency of the immigration issue has been apparent since Arizona’s Republican Gov. Jan Brewer signed Senate Bill 1070 in April of 2010. The measure signaled the intention of conservatives at the state and local levels to protest what they considered lax federal enforcement of immigration laws by inducting regular police officers into the unaccustomed role of harassing, detecting and arresting people without citizenship documents.  Though portions of the law were immediately struck down by lower federal courts, the measure became a litmus test issue in 2010 congressional and gubernatorial contests around the country, particularly among Republicans.

Copycat legislation was introduced in a host of states, with Utah, Georgia, Indiana, South Carolina and Alabama enacting harsher laws and experiencing mixed results in court challenges. Alabama’s 2011 law, which goes well beyond the Arizona template by seeking to use school officials to identify “illegals,” has attracted national attention by spurring an exodus of undocumented people from the state and damaging the state’s agriculture industry as unharvested crops rot in the fields (as is also occurring in Georgia).

Until the federal courts sort out the various lawsuits and begin to define a permissible state role in the enforcement of federal immigration laws, the furor will mainly serve to keep pressure on Republican politicians to display their “toughness” on the issue. It will also draw fresh attention to the collapse of Bush-era efforts to enact comprehensive immigration reform that includes a path to citizenship for the roughly 11 million undocumented people already in the country.

In the crossfire of this controversy are Hispanic Americans, who are alternating between fearful rejection of Republican anti-immigrant rhetoric and deep frustration at the failure of the Obama administration and the Democratic Party to promote comprehensive reform.

The firestorm set off by Arizona showed that the grass-roots conservative rejection of prior Republican support for a “path to citizenship” -- known simply and bitterly as “amnesty” on the right -- associated with both George W. Bush and Arizona’s own John McCain, has if anything intensified despite the recession, the drop-off in the number of illegals entering the country and stepped-up federal enforcement measures.

If there was any doubt that comprehensive immigration reform had joined other elements of Bush's “compassionate conservatism” on the dustbin of political history, it should have been laid to rest by the recent experience of one-time GOP presidential front-runner Rick Perry of Texas. Perry’s support for what was once a non-controversial program that enabled undocumented immigrant children graduating from Texas high schools to obtain in-state tuition rates at public colleges destroyed much of his base of support among conservative voters.  The fact that Perry’s  attempt at a comeback began with a harsh attack on Mitt Romney’s alleged employment of undocumented workers in a landscaping project at his own home shows the Texan’s tardy understanding that the immigration issue was his most important albatross.

This passion play over immigration on the right is occurring in a larger context where Republican efforts to deny Barack Obama reelection may well depend on the size and direction of the Hispanic vote.  According to exit polls, Obama won 67 percent of the Hispanic vote in 2008, and a record turnout among Hispanics lifted them to 9 percent of the electorate.  As is usually the case, the Hispanic share of the midterm electorate dropped significantly, to 6.9 percent in 2010, with the Democratic share dropping to 60 percent.   A return to something approaching 2008 levels in both turnout and support levels could be crucial to Obama's prospects in 2012.

But early measures of Hispanic enthusiasm for voting in 2012 are down significantly. Obama’s job approval rating among Hispanics (according to the latest Gallup weekly tracking poll) is at an anemic 49 percent, not much above Obama’s overall rating of 42 percent  Certainly the intensity of support for Obama has declined along with the approval ratings. A recent Latino Decisions survey showed the percentage of Hispanics “strongly approving” of Obama dropping from 41 to 28 percent just between June and August of this year.

With the unemployment rate for Hispanics standing about 2 percentage points above the level for the population at large (with home foreclosure rates a lot higher), some of the unhappiness simply represents the same economic factors that have drained Obama's support in all elements of the electorate. But aside from the administration’s failure to revive comprehensive immigration reform legislation, its policy of stepped-up enforcement -- nearly 400,000 undocumented immigrants were deported in the fiscal year that ended on Sept. 30 -- has drawn fire from Hispanic political activists.

The Justice Department’s recent interventions in support of legal challenges to the new state immigration enforcement laws provide an important point for Democrats seeking to buttress Hispanic support heading into 2012, but at the cost of some political peril in the broader electorate.  Polls taken last year in the wake of publicity over Arizona’s law consistently showed comfortable majorities supporting Arizona’s efforts, along with eroding support for “path to citizenship” initiatives.

More recent negative publicity from states like Alabama about panicked families fleeing their homes, struggling legal Hispanic businesses, and wasted crops are likely to undermine general support for more aggressive anti-immigrant measures, while raising Hispanic ire toward the (almost universally) Republican politicians promoting this legislation. Add in the Republican presidential candidate debates featuring competing and ever-escalating attacks on anyone who would defend undocumented workers or offer their children any benefits, and it’s no surprise that flagging Hispanic support for Obama has yet to benefit Republicans.

Even Rick Perry, who has suffered mightily for his relatively moderate position on immigration, registered only a 37 percent approval rating from Texas Hispanics in a recent survey (as compared with a 49 percent disapproval rating).  Since the usual benchmark for the percentage of Hispanic voters needed by a Republican to win a presidential election is 40 percent, that is hardly a comforting sign for the GOP.

One thing is certain. The slow but steady progress through the federal courts of lawsuits involving state immigration laws (federal appellate courts have already issued conflicting decisions involving the Arizona and Alabama laws) will continue as the 2012 election cycle intensifies, possibly concluding with a landmark Supreme Court decision.  As conservative Republican primary voters beg for anti-immigrant rhetoric from their candidates, and the Hispanic vote begins to take form in the swing states of the general election, we are likely to learn that reports of the demise of cultural issues in 2012 were wildly premature.