25 years after the Red Sox infielder's infamous World Series error, we look at what really happened that October 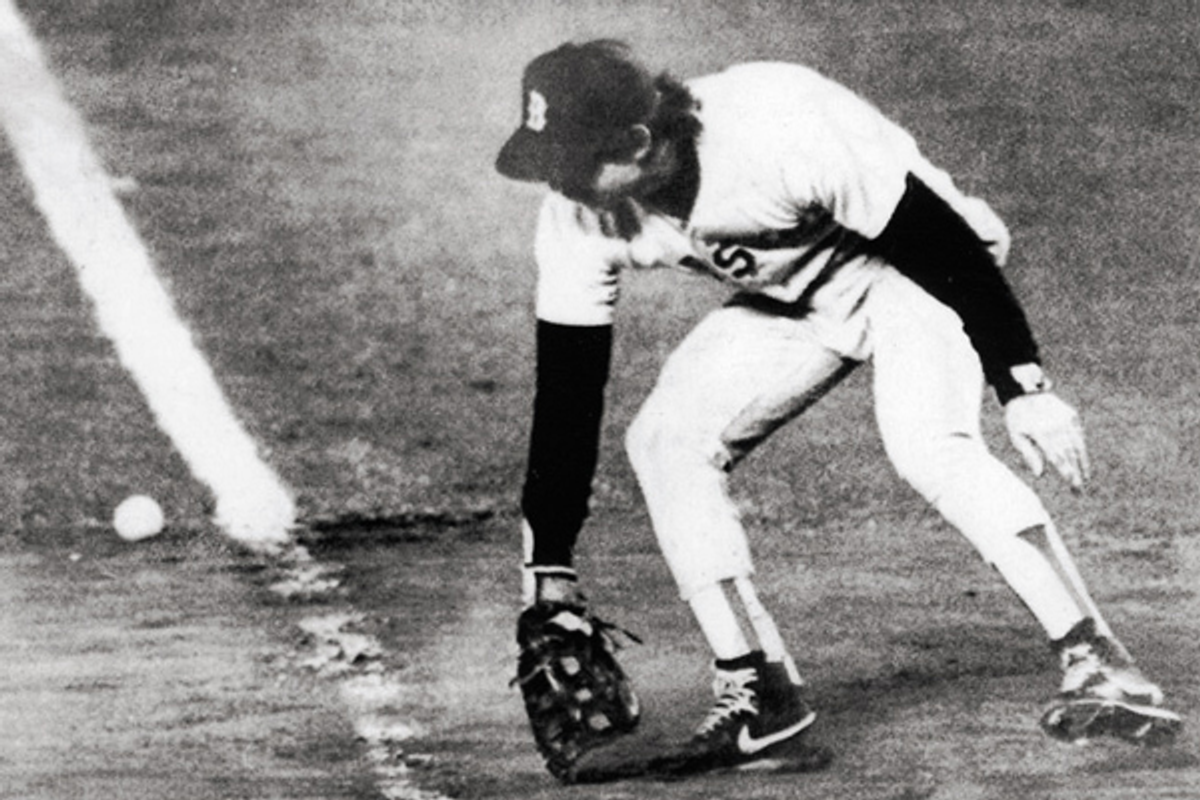 Bill Buckner’s error in the 1986 World Series – 25 years ago today, a day of infamy for Red Sox fans -- is one of the two most famous plays in World Series history. (Willie Mays’ catch in the 1954 fall classic is the other.)

Like Mays’ over-the-shoulder catch, Buckner’s booboo is entrenched in American folklore. Jimmy Fallon’s Red Sox fanatic in “Fever Pitch,” distraught over breaking up with his girlfriend, watches Buckner’s play over and over on his VCR. During congressional hearings in 2008, U.S. Rep. John Yarmuth, D-Ky., called former Treasury Secretary John Snow, then-SEC chief Christopher Cox and former Federal Reserve Chairman Alan Greenspan “three Bill Buckners.” On “Curb Your Enthusiasm” this season, Larry David loses a softball game when a ball rolls between his legs; his coach screams, “You Buckner-ed me!”

At the time, the Red Sox were burdened with 68 years of frustration; their last championship was in 1918. Leading three games to two against the New York Mets, Boston was ahead by a score of 5-3 in the bottom of the 10th inning. Red Sox pitcher Calvin Schiraldi got two quick outs. In the Sox locker room the champagne was iced, and the scoreboard flashed “Congratulations Red Sox.”

Gary Carter, Kevin Mitchell and Ray Knight all singled, and the score was 5-4 with Mitchell on third. Reliever Bob Stanley came into the game to pitch to Mookie Wilson and threw a wild pitch that brought Mitchell home and tied the score. But it’s the next play that still has Red Sox fans screaming in the middle of the night.

Stanley threw a sinker-ball, designed to produce ground balls to infielders. What was supposed to happen did happen—Mookie Wilson tapped a slow grounder at Buckner at first base. But the ball rolled between Buckner’s legs, and the Mets won in the most incredible finish to a World Series game ever. (See it with commentary by the inimitable Vin Scully.)

Buckner's career changed in an instant. Up to that moment, he was one of the game's great unsung hitters. He'd batted better than .300 seven times in his career, winning the 1980 American League batting title. He led the league four times in assists. During that crucial September 1986 playoff run, he carried the team, hitting .340 with eight home runs. All that was soon to be forgotten.

The scholar Stephen Jay Gould (in Natural History magazine) called him “a gallant first baseman and a veteran with a long and distinguished career.”

“For weeks,” wrote Gould, “manager John McNamara had been benching Buckner for defensive purposes during the last few innings of games with substantial Red Sox leads, but after a long and hard season, Buckner’s legs were shot ... he could hardly bend down.”

Plagued with chronic ankle soreness—he was the first player to wear high-top baseball cleats to ease the pain— Buckner had been relieved in three previous series games by Dave Stapleton. Why was he still playing when Wilson hit the ground ball? Because McNamara was sentimental; he wanted his regulars on the field when the Red Sox won the series.

But Buckner’s error did not lose the championship for the Red Sox; it didn’t even lose Game 6 for them -- the Red Sox had already blown their two-run lead. Two nights later, with another chance at the ring, Boston lost 8-5.

(Buckner, incidentally, had two hits in four at-bats and scored a run in Game 7.)

Red Sox fans cried “Curse of the Bambino”—the punishment Boston supposedly merited for selling Babe Ruth to the Yankees in 1919—but the focus of the curse that season was Buckner. Yet Buckner did not put the tying runs on base. He didn’t throw the wild pitch that made it 5-5. He did not make the decision to keep his defensive replacement on the bench. Had he made the play, the Red Sox could have lost the game anyway.

When so many others contributed as much or more to the Red Sox defeat, why has history made Buckner the goat? Perhaps Gould said it best when he suggested that in the collective minds of Red Sox fans, “If Buckner fields the ball properly, the Sox win their first World Series since 1918 and eradicate the Curse of the Bambino. In this scenario, Buckner’s miscue marks the unkindest bounce of all, the most improbable trivial little error sustained by a good and admired man. What hath God wrought?”

What God wrought, perhaps, was a curse on both teams. The New York Mets have not won another World Series since; their greatest stars on that 1986 team —pitcher Dwight Gooden and slugging outfielder Darryl Strawberry—saw their careers cut short by drug abuse. In 2007 and 2008, the team crumbled down the stretch and missed the playoffs. And this year, the Red Sox, who seemingly broke the Curse by winning the World Series in 2004 and 2007, suffered the all-time worst collapse in baseball history, losing 20 of their last 27 games.

But that was kid's play for what God had in mind for Donnie Moore. Red Sox fans were quick to forget that they never would have had a crack at their own little tragedy had it not been for Donnie Moore. Boston made it to the World Series by beating the then-Anaheim Angels in the American League Championship Series. After four games, they were in better shape against the Red Sox than the Red Sox ever were against the Mets.

On Oct. 12, 1986, playing in Anaheim, the Angels were up three games to one with a 5-2 lead going into the top of the ninth. Then, a real curse revealed itself. Don Baylor hit a two-run homer to make it 5-4. Moore had been a fine relief pitcher that season, tallying 21 saves. With two outs and the tying run at second, Moore got two strikes on Dave Henderson, then tried to slip a fastball by the Red Sox outfielder. The pitch changed his life. Henderson slammed it to deep left field for a two-run homer. On TV, Al Michaels screamed, "Unbelievable! Astonishing! With one strike away Anaheim Stadium was one strike away from turning into Fantasyland! You're looking at one for the ages here!"

Like Buckner, Moore was damned for losing the big one. What was forgotten is that the Angels came back to tie it, and Moore, still in the game, induced Jim Rice to ground into a double play. But in the 11th, the Red Sox scored another run off Moore on a sac fly by – of course – Dave Henderson. The Angels lost 7-6.

But that still left them with two chances to win their first-ever pennant and trip to the World Series. The Sox blasted the Angels pitching for 19 runs over two games and went on to meet their destiny against the Mets, without the slightest thought that they owed a great big ugly debt to sheer luck – one that would soon be repaid with interest.

Still, to Angels fans, it had all come down to the pitch that Donnie Moore threw to Dave Henderson. All the subsequent chances that they lost were the evil spawn of that one pitch.

For the next two years, Moore couldn't walk out on the field without being booed, crushed and heckled. When he left the ballpark, fans were lineup to scream insults, even when he won. Moore began to drink heavily and his talents eroded. On July 18, 1989, Moore got into a shouting fight with his wife at their home in Anaheim Hills. He went to his closet, got an automatic pistol and, in front of his children, shot his wife and one of his daughters. The daughter drove herself and her mother to the hospital; they survived. Moore did not. Back in the house, with his son pleading for him to drop the gun, Moore shot and killed himself.

Now that is tragedy. That puts Bill Buckner's error in perspective. It's only a game, unless you choose to regard it as something more.

Meanwhile, the infamous Buckner ball, once owned by Charlie Sheen, is up for auction on eBay, asking price $1 million. The bid will close at the exact minute of the 25th anniversary of the play.

Now a successful businessman, Buckner has lived down the error by turning the joke on himself. On “Curb Your Enthusiasm,” he won the cheers of a New York crowd by catching a baby dropped from a burning building.

In 2008, he threw out the first pitch of the Red Sox home opener and got a standing ovation from the sell-out crowd. Somewhere, one has to feel, the Bambino himself was applauding.