So far he's stayed neutral about putting the Confederate flag on Texas license plates. He should oppose it 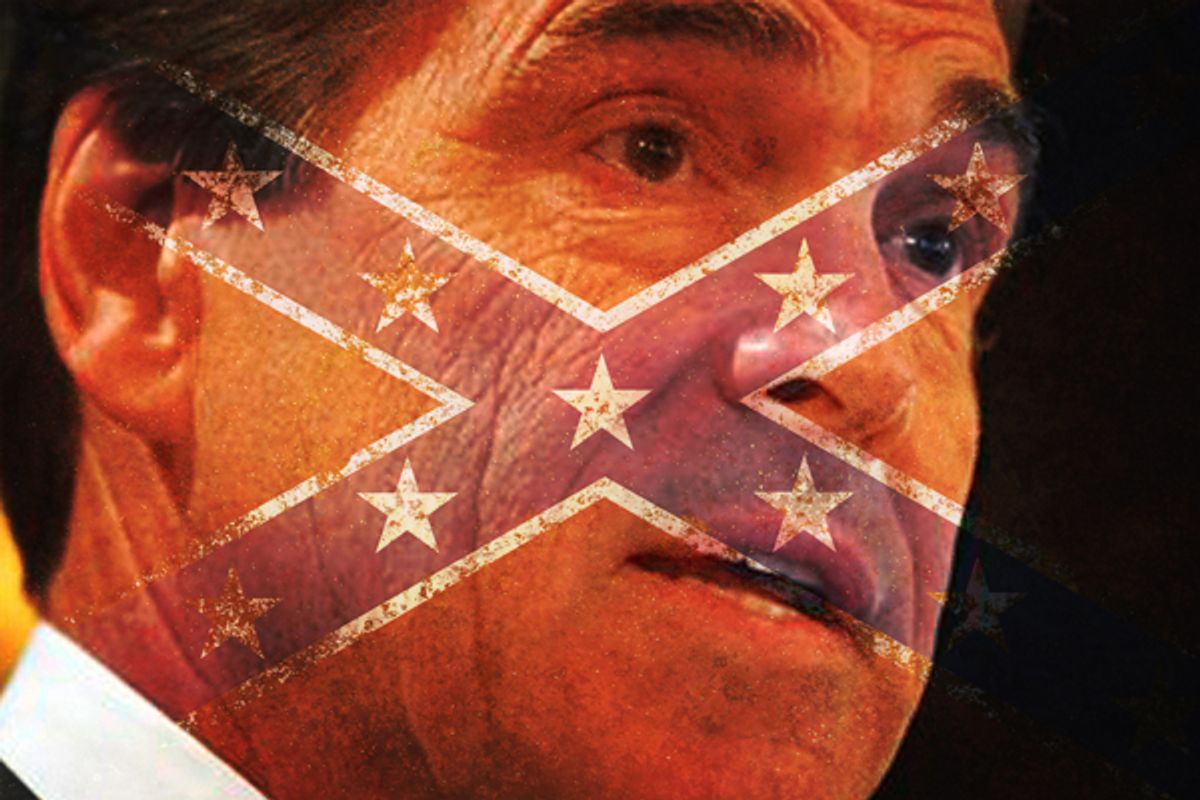 If Rick Perry really wants to show the nation he's renounced the politics that made it OK to name property "Niggerhead," he's got a great opportunity. In November, the Texas Department of Motor Vehicles board will vote on a proposal by the Sons of Confederate Veterans to let voters put a Confederate flag on their license plates. When the board last voted, it deadlocked at 4-4, with one commissioner missing. One member who supported the plan has since died, and Perry appointed his successor. Next month the question will come before the full board again. It's a chance for Perry to show some courage and make clear he's not courting the neo-Confederate vote.

But so far, the Texas governor seems to come out of the Haley Barbour school of leadership. Earlier this year, when the Sons of Confederate Veterans wanted Mississippi to issue a license plate commemorating Confederate hero and KKK founder Nathan Bedford Forrest, the governor refused to come out against the proposal, even after the NAACP asked him to. "I don’t go around denouncing people," Barbour told reporters, although he was asked to denounce the proposal, not people. "That’s not going to happen. I don’t even denounce the news media." At the time, the Mississippi governor was openly mulling his own presidential run, on an apparent campaign platform of Jim Crow racism being not "that bad," in his memory, at least. Barbour announced he wasn't running in April, after that trial balloon turned out to be made of lead.

To date Perry hasn't taken a stand on the Sons of Confederate Veterans license plate. (Salon's Justin Elliott ran down his quiet but savvy flirtation with his state's Confederate forces in July.) Now Texas Rep. Sheila Jackson Lee is pressing Perry to oppose the license plate proposal, while the Sons of Confederate Veterans are demanding he support it, calling it a "litmus test" of Perry's political courage and his willingness to support his state's Confederate die-hards. It turns out I agree with the SCV on that point.

So what will Perry do? He's doubling down on his birther idiocy, telling John Harwood that the president's birth certificate "is a good issue to keep alive." Expecting Perry to do the courageous thing is asking to be disappointed, but many people are watching.