The hip-hop superstar hypes a Brooklyn, N.Y., sports arena that failed to deliver on its jobs pledge 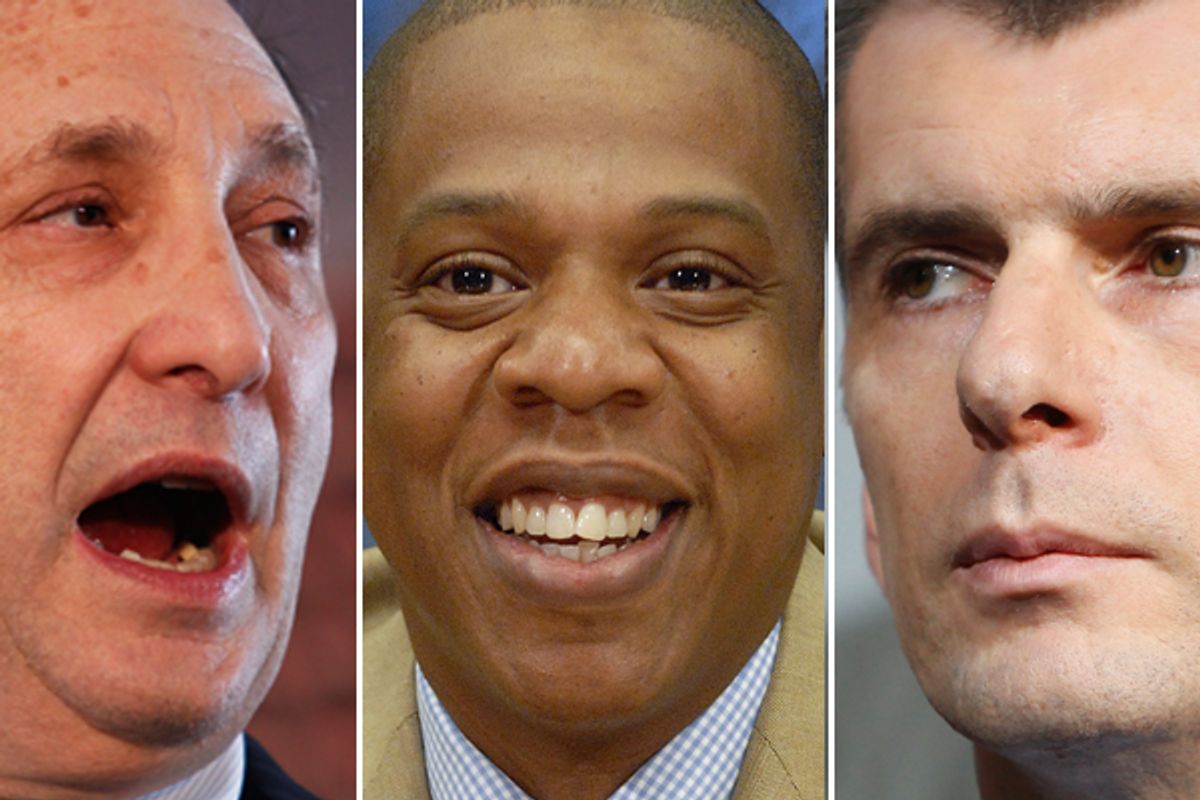 While Brooklyn-born Carter owns a tiny fraction of the team, he's become the face of the franchise, the Teflon-coated superstar employed by his partners to distract attention from the hardball politics, sweetheart deals and private profits behind the arena and the rest of the 16-tower project.

As Jay-Z, Carter will get to open the arena next fall with a string of concerts. "Get All Access to Jay-Z," proclaim widespread advertisements, pushing a ticket package that offers team home games and the right to purchase seats to other arena events. He's even said to have a hand in designing the team uniforms and some of the luxury suites. These all help Carter take the Jay-Z  brand to the proverbial next level. As he's rapped, "I'm a business, man."

Along the way Carter has spouted bogus "facts" about the project that don't stand up to scrutiny. Take, for example, an interview Jay-Z did Sept. 26 with Rosanna Scotto of Channel 5's "Good Day New York." The interview preceded the much-hyped media event in which Jay-Z, billed as "Cultural Icon Shawn 'Jay-Z' Carter," announced the less than surprising news that the team plans to change its name to the Brooklyn Nets.

"What do you think the arena's going to mean to people in this neighborhood?" Scotto asked. "Well, it's already created so many jobs, especially at a time like this in the world," Jay-Z responded. He told an in-house Nets interviewer that the under-construction project "employs thousands and thousands of people."

The number of jobs created turns out to be  a lot fewer than promised, and a lot less than "thousands and thousands." The total number as of now is probably under 500. And Ratner's job projections are far from credible. The New York City Independent Budget Office calls the arena a net loss to the city.

In fact, some once-vocal supporters of the Atlantic Yards projects -- recruiting from the same housing projects that Jay-Z likes to invoke -- in July held an angry protest outside the arena site. Yes, the recession and litigation have slowed the project, but, most important, Ratner negotiated a 25-year deadline for a project he always promised would take 10 years. Still Carter promotes the arena by proclaiming, "Oh, it's Brooklyn. We have deep love ... for our heroes."

The strategy of distraction has worked out well for Ratner. At the December 2003 announcement of the Atlantic Yards project, he had a couple of weapons beyond the promise of a new hometown basketball team: famed architect Frank Gehry, known for the iconic Guggenheim Museum in Bilbao, Spain, and Jay-Z, still on his remarkable journey from a hustler slinging drugs to an international icon.

Gehry's wavy architectural renderings were aimed to preempt criticism from Brooklynites already appalled by Ratner's hulking, blank-walled Atlantic Center mall nearby, a mall deliberately designed -- as the developer later would admit -- to keep out "tough [implied: black] kids" from the nearby Fort Greene neighborhood.

By adding glamour and Brooklyn street cred, Jay-Z would help Ratner distract New Yorkers from noticing how a corporation based in Cleveland, and controlled by Ratner's family, would be reaping the benefits of government assistance, including subsidies, tax breaks and eminent domain. No wonder Ratner, at that initial 2003 press conference, addressed Jay-Z with elaborate solicitousness: “Thank you for honoring us.”

Even as Nets players used as press conference props -- Vince Carter, Jason Kidd -- were traded away, Jay-Z stuck with Ratner. After the developer in 2009 sold 80 percent of the team to Prokhorov, there was Jay-Z, helping the new owner recruit NBA players, posing in a photo op with Prokhorov and New York Mayor Mike Bloomberg, and helping deflect focus from the Russian oligarch's questionable path to wealth.

Fast-forward to the Sept. 26 media event, which generated international coverage. Prokhorov was absent, but sent an emissary, who didn't speak. Jay-Z was onstage for less than two minutes before he left in his limo, but that was long enough to pose for a photo with star-struck Brooklyn schoolkids -- an image that now helps sell the Barclays Center.

By invoking his partner, Ratner even got to soften the impact of an arena larded with corporate sponsorships. "As Jay-Z knows, this arena is largely about the children and youth of Brooklyn," the developer insisted.

State Sen. Velmanette Montgomery has a different view of the Atlantic Yards project.

“I feel extremely frustrated and a lot insulted," she said later that day. Thanks to a development process, worked out by Ratner along with then-Gov. George Pataki and Mayor Bloomberg, no local elected officials have ever had a voice, with the project shepherded by the shadowy Empire State Development Corp. (ESDC).

At a community meeting that day with the ESDC head, Montgomery and three other elected officials (all, by the way, African-American) raised hard questions about Ratner's failure to deliver promises of jobs and housing -- the original Atlantic Yards slogan was "Jobs, Housing, and Hoops" -- and the state's gentle deadlines for the development. In contrast with the Jay-Z event, it generated barely any press coverage.

Jay-Z also generated much buzz at the elaborate March 2010 arena groundbreaking event. The Rev. Al Sharpton, whose organization is supported by Ratner's firm, tried to invoke a Brooklyn connection, claiming that "we've gone from Jackie [Robinson, who integrated baseball as a Brooklyn Dodger] to Jay-Z, where we can not only play the game but we can own a piece of the game." (Jay-Z's minority ownership of the Nets doesn't quite have the societal impact of Jackie Robinson.)

The Rev. Clinton Miller of Brown Memorial Baptist Church, a Brooklyn clergyman more grounded in Atlantic Yards, recently called for “a more triangular version of development," one that involves not just the developer and the state but also the community. "Maybe it’s too late to add that template to the Atlantic Yards," Miller mused. "But certainly the developer could not have gotten to this point without the ESDC. And it looks like the developer said whatever it had to say to get up to a billion dollars in taxpayers’ money.”

Jay-Z's got such credibility that he was recruited to guest star on a recent episode of  "Secret Millionaires Club," a financial literacy cartoon series on the Hub network featuring billionaire Warren Buffett.

"Being a good businessman has allowed me to help others, like my charity, the Shawn Carter Scholarship Foundation," Jay-Z advised kids in his cameo. Ratner and Prokhorov, however, come first.