What makes a great-looking jetliner? 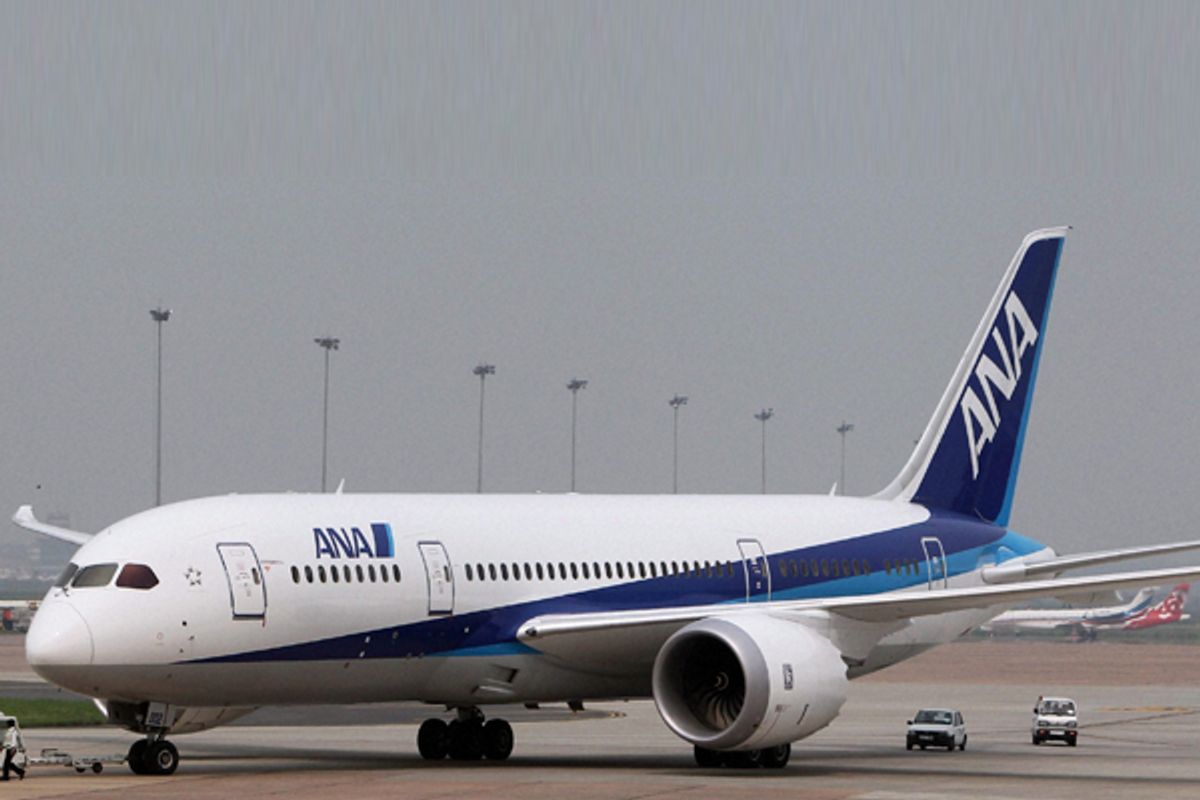 The first thing I need to backpedal about is my verdict on the looks of the new Boeing 787 "Dreamliner."

"Aesthetically it's no 747, but it's a handsome plane," I wrote of the 787 in a column earlier this month. "Confident in a way not unlike its older and smaller sibling, the 757."

Confident, maybe, but have you taken a look at that tail? It's too small, out of proportion with the rest of the jet. And its odd, too-sharp curvature gives the plane a fishlike appearance.

You might remember my comparison between jetliners and skyscrapers, borrowing from the architecture critic Paul Goldberger. "Most architects who design skyscrapers focus on two aesthetic problems," wrote Goldberger in an issue of the New Yorker a few years back. "How to meet the ground and how to meet the sky ..." It's much the same with airplane designers, and if we think of a jetliner as a horizontal skyscraper, its beauty is gained or lost mainly through the sculpting of the nose and tail.

(Am I the only one to notice how they don't make planes or skyscrapers the way they used to?)

The 787 fails in the tail, and the whole plane suffers from it.

Though not to the same extent that the A380 is ruined by its nose. Or "head," maybe, is the better term: There is something grotesquely anthropomorphic about the front of the A380. It's like a plane that's missing a chromosome. And I'm hardly the only one who thinks so; I've been seeing more and more A380s of late, and every sighting elicits an incredulous comment. "Gawd, that thing is ugly," or something to that effect. Amazing that the same people who brought us Concorde were responsible for such a monster.

Concorde wasn't just a great-looking plane, but that name, too: Concorde. The main idea, presumably, was to convey solidarity in the Anglo-French partnership that designed and built the thing. But it goes beyond that. There's something wonderfully evocative about the sound of that word: Concorde. It says sleek, fast, stylish -- a little bit haughty and probably out of your league.

That's something I miss: commercial planes that were named rather than numbered.  Aside from Concorde we had the Comet, Trident, Mercure and Vanguard (all European products). The English laid it on a bit thick, as they are wont to do, with the Britannia, a four-engine turboprop of the 1950s, but mainly they've been good, understated choices.

Other planes were given nicknames in conjunction with numbers, like Lockheed's L-188 Electra or the L-1011 TriStar. The 787 falls in this category, though I'm not especially fond of the "Dreamliner" designation. Somehow the imagery there is a little too wobbly and ethereal. People don't want their planes flailing around or nodding off.

It could have been worse, though. Back in 2003, before Boeing had settled on a name, Dreamliner was in contention with three other possibilities. They were: Global Cruiser, Stratoclimber and eLiner. I'm not making this up. Global Cruiser sounds like a yacht, or a really big SUV. Stratoclimber sounds like an action hero. And eLiner is almost too awful to contemplate. Sort of like "iPlane."

The 747, for its part, remains a beauty all around: elegant prow, sexy tail, and the palindromic poetry of that name: seven-forty-seven. (All contemporary Boeings are palindromes, I know, but the other ones just aren't the same.) The latest 747 variant, the first of which has just been delivered to Cargolux, the European freighter outfit, takes the baseline silhouette and actually makes it prettier.

Those scalloped engine nacelles, by the way, seen on both the 787 and the new 747, aren't simply there to look cool. The scallops, known also as "noise reduction chevrons," make the engine quieter. Just don't ask me how. Something about remixing the bypass airflow coming from the forward fan.

Meanwhile, something that I wrote on Oct. 19 requires a little clarification. "Today we hear of 'regional airlines,'" I stated in a discussion of airline industry changes over the past few decades. "But this is a relatively new term, and really a new business model."

Well, it is and it isn't, as astutely pointed out in a letter from a longtime airline employee Sheila Hartney:

"You seem to think that regional airlines hadn't previously existed, and that small airlines of the past were only called 'commuters.' That's not true. Back in the day, there were a number of regional carriers. The list includes Mohawk, Piedmont, Allegheny, Pacific, Bonanza, Ozark and several others. These airlines were sometimes called 'local service carriers,' but they were known to folks in the business as regionals."

Hartney is correct. What I should have said is that the definition of regional airline has changed. The term itself is not new.

Today it refers to any of the numerous, mercenary code-share outfits that, stripped of their individual identities, fly on behalf of, and in the colors of, major carrier affiliates. You know them by their "Express" or "Connection" suffixes. To their employees they are companies like ExpressJet, Mesa, Comair and Colgan. Watch for the fine print near the forward boarding door.

In the old days the regional moniker referred to any of a number of small but wholly independent carriers. They were described as "regional" because, as many of their names implied, they focused operations in a particular part of the country. In addition to those mentioned by Hartney we had Frontier (the original Frontier), Hughes Airwest, North Central, Midway, Pacific Southwest (PSA), Southern, Air Florida, New York Air and many others.

(The Ozark swallows -- now that was a cool livery. North Central's logo was a stylized, non-ironic duck. Quite attractive, but still a duck. Imagine that today.)

A number of these companies eventually joined forces. Allegheny, for instance, changed its name to USAir, then took over PSA and Piedmont to become a fully fledged major. In fact, when you trace the lineage of America's majors, you see that nearly all of them were formed through consolidations of smaller carriers. (Notice too the similarity of the old-time airline names with railroad names.) Once upon a time, all airlines were regionals.

Northwest Airlines is today part of Delta, but itself was pieced together from no fewer than four regionals; in 1986 Northwest merged with Republic Airlines. Republic, for its part, was the recent amalgamation of Hughes Airwest (Phoenix), Southern Airways (Atlanta) and North Central Airlines (Minneapolis).

What a lunatic mix of compass points that was. We imagine the old Northwest "NW" compass logo spinning helplessly in circles, looking for its one true home.