When my father became a woman

After Dad had gender reassignment surgery, he promised he'd be the same person. Then why do I miss him so much? 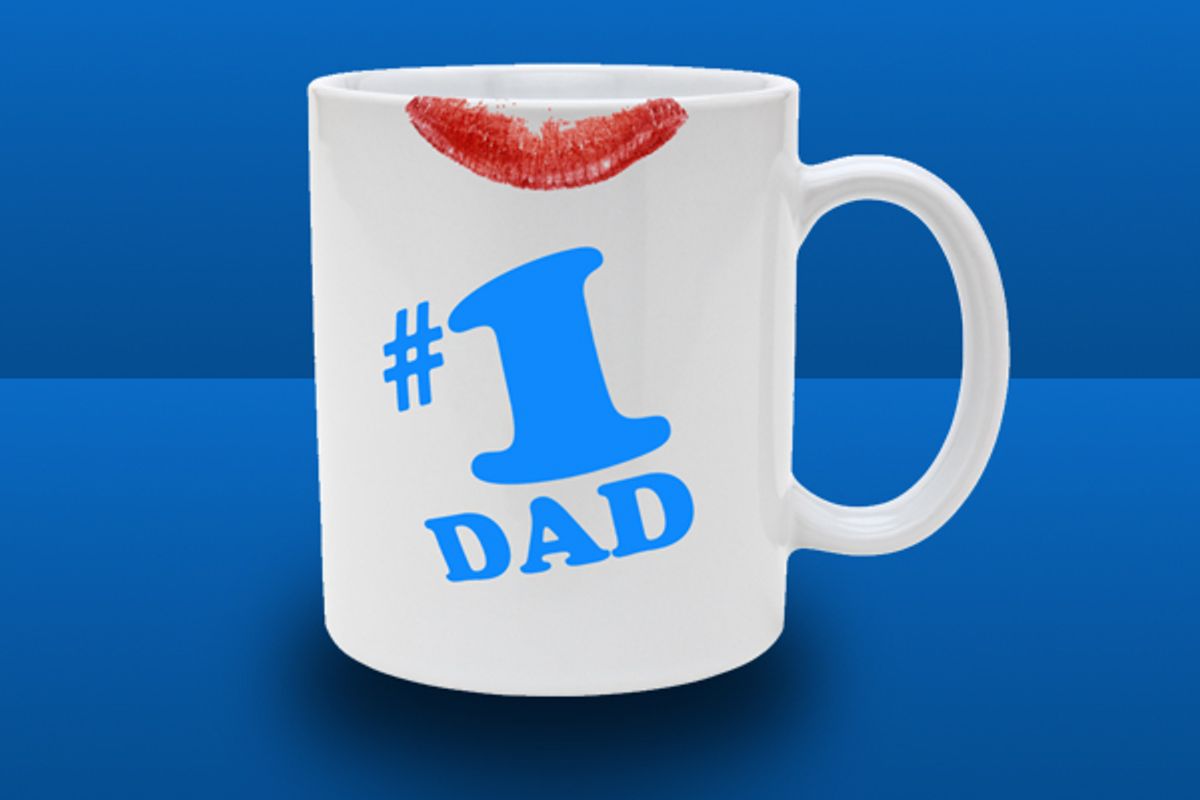 The Castro. A place we can wander freely, without fearing for my father’s safety. All rainbow flags and crowded sidewalks. Ads for nightclubs and escort services stapled to telephone polls. A cookie shop whose walls are plastered with pictures of half-naked people that sells, among other things, penis-shaped macaroons.

My father, dressed in jeans and a sweater with a pashmina wrapped loosely about her neck, walked ahead of me, her girlfriend at her side. My father’s extensive collection of jewelry and her outfits still startle me. Everything is so form-fitting! It is cheating, I think, to wear women’s jeans and not have hips.

“It’s not fair,” I told her once. “You get all the perks of being a woman but none of the pain. You don’t have to get a period every month.”

I was forgetting about the procedures, the hormones, the electrolysis. But still.

We were in search of breakfast, which with my father in San Francisco means walking for at least 20 minutes to reach a restaurant I have yet to try because a repeat visit is unthinkable to her.

But I don’t like waiting for breakfast. I don’t like getting sweaty first thing in the morning. I like cars. And my hunger had reached a dangerous level. I was finding it hard not to shout at people, not to hit them with my leather bag or scream at them to get out of the way.

We turned down a side street lined with tall, narrow houses. A lone man walked toward us. The only other person on the quiet street.

“I’m too hungry for this, Dad,” I said -- and suddenly forgot to breathe.

I remembered too late. Remembered only after the word had left my mouth. The word I wasn’t supposed to say in public anymore. The title my father had suggested I not use any longer, because if I did, I might make a mistake, might let it slip in public.

My father said nothing. Didn’t look back at me. Didn’t glare. Just the sound of feet hitting concrete.

My heart pounded in my throat and my eyes darted back and forth – man to father, man to father. But the man made no move. Didn’t reach into his jacket for a gun. Didn’t pull a knife from his pocket. Didn’t step in front of us and seize my father.

He walked right by.

“Sorry,” I whispered once the man had passed. My father didn’t answer.

My father had gender reassignment surgery four years ago at a hospital in Arizona while I was taking final exams at the end of my freshman year of college. She’d been living full-time as a woman for a year and had already had the facial surgeries and breast augmentation. The “Big Surgery,” as I called it, didn’t much change my perception of my father. For me, the transformation had already occurred.

No one told me that when my father changed her identity – her name, her lifestyle, her body – that my father would change, too. That the role of father would blur. That our father-daughter routine would seem sacrificed to the gender gods, something lost in the transition into my father’s new life.

In my father’s San Francisco apartment I don’t know where my place is at the table, despite the fact that it is my table, the table that once belonged in our family’s kitchen in Minnesota, the table where I ate dinner for the majority of my life, where I consumed full plates of pasta and baked potatoes and vegetables and eggplant parmesan, my father’s favorite.

“I want you to feel at home here,” my father says, but there are pictures of strangers on the refrigerator, people I have never seen before. Even the refrigerator magnets are unfamiliar, nothing like the magnets we used to have, which were plain, unadorned – simple pink spheres that got the job done. The magnets on my father’s refrigerator are exclamatory, geology-themed. My father’s girlfriend works in the field. “Geology Rocks!” says one.

For a long time I couldn’t see the father I used to know. I saw clothes, makeup, impractical shoes. I saw my father’s new girlfriend, my father’s new life, my father’s new home, filled with accumulated artifacts from my previous life, remnants of my past. Even now, years after the divorce and my father’s transition, I visit and feel jarred by bursts of recognition. Hey, I know that mug. I remember this painting. I know the stories behind things. I look at the coffee table with black metal legs and remember that at age 8, I rested my ice skate against it as I tied up my laces, creating a long, jagged scratch along the edge of the table. I’m the reason the corner piece is broken off.

I know that if I wanted to wreak havoc, I could talk about the furniture. Could say to my father’s girlfriend, “You know, this stuff used to be in our living room. I used to sit on this black leather sofa every night with my mom and dad.”

I could tell her I was with them when they bought it. That we got it from this upscale place in Minnesota. I’d loved going to that store. One room just for lights. Lights everywhere. Lights hanging over your head, lights beside you. Every light on, glowing. One room – huge – used exclusively for mattresses. The lighting dim and blue, like a bedroom at night. There were a few rooms with children’s beds and dressers, but I hated those rooms, the pale woods and pastels and primary colors. I preferred the dark mahogany reserved for grown-ups, the sophisticated leather chairs, the ornate lamps and chandeliers.

I could tell her I spent most of my time in a room downstairs meant to keep children out of the way while our parents shopped. I’d loved this room most of all. Free hot chocolate. The rich kind that left a coating on your tongue and made you feel like vomiting after you drank it.

Upstairs I’d found my mother, father and a salesman gathered around a sofa. Black leather.

It was delivered to the house soon after. Placed in the family room with the wooden coffee table, where we’d rest our feet every evening, where our golden retriever would wedge in, lying on the carpet in the space between sofa and table, lying beneath our outstretched legs.

I could tell my father’s girlfriend I was there when they bought this sofa, the one she and my father sit on every morning and every night. I was there. Because it was my family. My mother and my father. My dad. Not this person she knows now. Someone else altogether.

There is more than one kind of death.

“I’ll still be the same person,” my father said before the transition. But how can this be true, when the scar on my father’s forehead is gone, when his short silver-blond hair and his body no longer exist? When the word “Dad” has become something to avoid? If my father is still the same person, why do I miss him so much?

Gone is the scene I once witnessed nightly – my father coming home after a long day of work, dressed in black shoes and dark pants, a button-up shirt and tie. The comfort of familiar clothing. All these things that seem small, inconsequential – the way your father parts his hair, the line of his jaw, the heaviness of his wristwatch, the shoes he wears, how he comes home late after playing volleyball Sunday nights, smelling of breath mints and beer, how he calls you “honey” when you’re feeling sad – these things mean something. They add up and become the things we remember, the things we miss, the things that make your father your father. These are the details that bring a person into the world. They anchor us. They allow others to anchor themselves to us.

“You’ll get up at your usual time then?” she asks, knowing full well that if I do we won’t have breakfast until noon and I won’t be on the road until it’s too late. She wants to keep me, I know, even if I’m asleep in the next room.

I feel our father-daughter relationship most strongly when things are ordinary. Then flickers of our former roles come back – like when my father’s voice bends in sympathy when I’m sick with a fever, or when my father says, “That’s my girl,” a phrase once uttered on a regular basis, back before things changed.

When my father met my boyfriend for the first time, we were thrown abruptly back into traditional father-daughter roles, despite the fact that I hadn’t called my dad “Dad” in years. At least not to her face.

“You can’t tell embarrassing stories about me,” I warned my father. “OK? Promise?”

“And don’t ask him about his intentions or anything like that, OK?”

It was funny, almost.

My father asked my boyfriend questions about himself, quizzed him on his plans for the future, gave exasperated sighs when he kissed me for too long while in her line of vision. “Kids,” she said, and I wanted to bask in the feeling of familiarity, of safety, the expected dialogue of a father meeting the daughter’s boyfriend. It rolled over me in waves, this quiet gratefulness, to have my father again in a way I could understand. In a way that felt as ordinary as the wristwatch he used to wear, the shoes he kicked off at night, and the black leather sofa in our living room.

Danielle Brown has a degree in psychology and is working on a book about her relationship with her father.