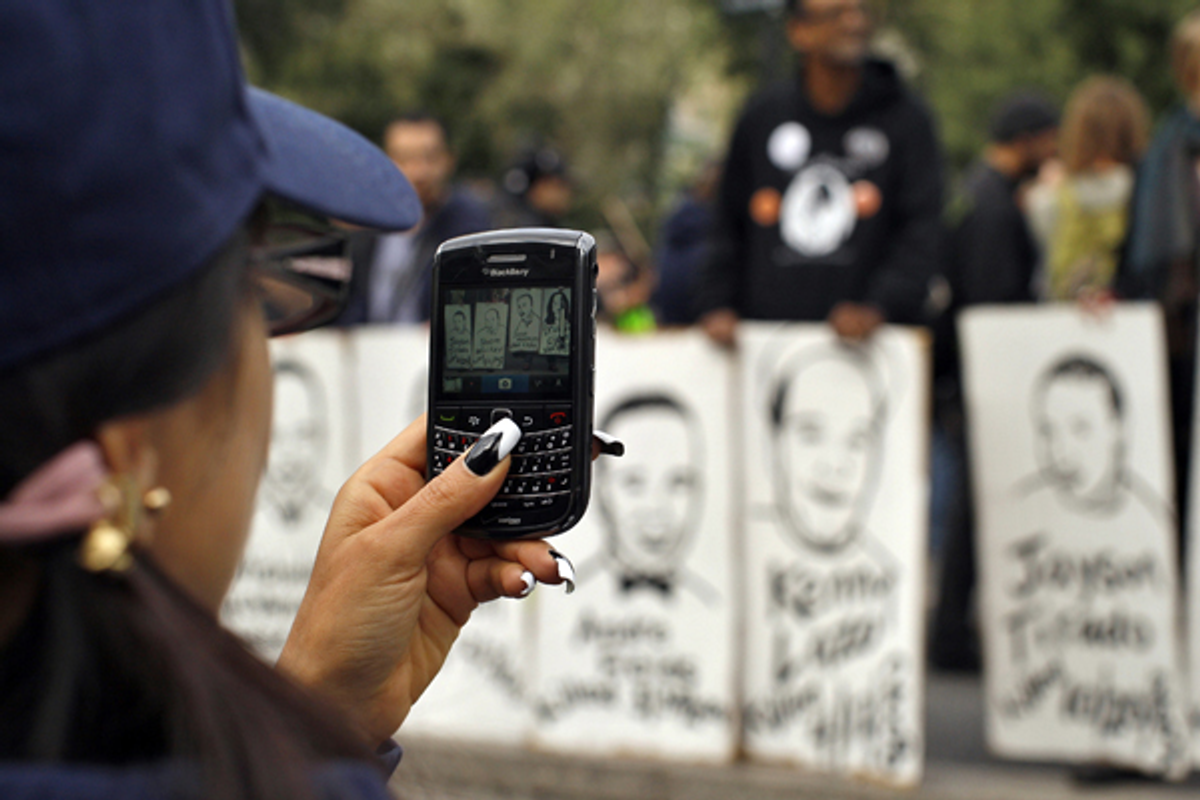 A woman takes pictures with her mobile phone at an Occupy Wall Street protest in Union Square in New York October 22, 2011 (Reuters/Eduardo Munoz)
--

“This is the most heavily documented protest in the history of the world by a long shot,” says Jesse LaGreca, 31, an underemployed restaurant manager who has been at Occupy Wall Street since the beginning. “And It really serves two purposes. One, you're bearing witness – you're creating an image that is not being broadcast elsewhere. And I think that really messes with the mainstream media because if we've got our livestream and 30-40,000 people are watching something happen in real time and then seven hours later you see the way the news portrays it, it just totally blows that myth apart.”

LeGreca achieved a bit of viral fame himself when he confronted a Fox News reporter at Zuccotti Park earlier this month. The footage never made it onto the network, but another camera was rolling at the time – a protester's – and in the end the segment was viewed on YouTube by hundreds of thousands of people. “It belies the truth of fair and balanced,” LaGreca told AlterNet. “If it doesn't fit the narrative that they're trying to create, then it ends up on the cutting-room floor.”

The other purpose is to keep the police honest. “I tell people to document everything, record everything – it's really the best way to keep ourselves safe,” LaGreca said.

Cameras are changing the way protests are being viewed around the world. In February, the New York Times ran one of 1,000 stories about how protesters in the Middle East were using cellphone cameras to “upstage government accounts” of the “Arab Spring” and draw “worldwide attention to their demands.” The humble cellphone camera, noted the Times, “has become a vital tool to document the government response to the unrest that has spread through the Middle East and North Africa.”

And so it has been during what some have dubbed the “American Fall.” There are currently more cellphones in the United States than there are human beings. Digital cameras are everywhere – they're small, cheap and ubiquitous at protests -- and they're creating a sea- change in the way the public views dissent here at home. “It's a lot harder for police to sweep allegations of abuse under the rug when it's on video and on YouTube,” Donna Lieberman, executive director of the New York Civil Liberties Union, told AlterNet.

“Public video recording has dramatically changed the landscape of police accountability – no question about it,” Lieberman said. “And it's also impacted the standing of the police department and the police commissioner.” She added that during the now-infamous crackdown on protests surrounding the 2004 Republican National Convention, her organization viewed the ever-present police surveillance cameras as an effort to intimidate protesters, but, “what we learned in the aftermath of the RNC, was that the police department's own video was a double-edged sword, because not only did it serve their interests, but it also carried the promise of a 'pictures don't lie' kind of record of what went on.”

Lieberman noted that video evidence had led to the dismissal of charges against 227 protesters from one location alone during the tumultuous week of demonstrations. “We've already seen that the videos of what happened on the Brooklyn Bridge are being used to urge dismissal of those hundreds of arrests there,” she added.

Protesters' cameras have created many of the iconic images of this movement: NYPD supervisor Anthony Bologna pepper-spraying several women at point-blank range; a protester – later identified as activist Felix Rivera-Pitre – being spun around and punched in the face by a cop; a legal observer being run over by a police scooter and then hit with a baton by another cop; a Marine – and Iraq vet -- yelling at befuddled cops that 'these are American citizens and they have no guns.' These images helped propel a small movement into a global phenomenon. Lieberman said of the pepper-spraying incident, “I think it was among the many factors that galvanized the public to stop cheering from their computer screens and go down to Wall Street to be part of this protest movement.”

Michael Ratner, president of the Center for Constitutional Rights, told AlterNet that the video of the women writhing on the ground in agony might end up having an effect similar to that of the infamous civil rights-era footage of Bull Connor setting dogs on black protesters in the South. “That just changed how Northerners viewed the Southern struggles,” he said. “And I think we'll see this as more and more videos emerge of people being beaten, sprayed and unlawfully caged during these protests.”

Video offers a way for ordinary citizens to hold law enforcement accountable. “Self-policing by the police department is absolutely hopeless,” says Ratner, a veteran defender of Americans' civil liberties. “We have a civilian complaint review board here [in New York] – completely hopeless. It's a culture that I think will never correct itself.” But, he added, “despite the fact that we've seen a lot of violence -- more violence than I would have ever wanted to see – our hopes are that there is less violence than there would have been but for the video cameras.”

Cameras have become an integral part of activists' legal strategy. “We just encourage everyone to get out there with their cameras,” says Ratner. “Let the cops push you around, let them slap you, let them arrest you, but it's absolutely crucial to get your cameras out there. Because all the lawsuits we can bring, which we should resolve five years from now, won't make the same difference as putting that stuff on YouTube and the evening news will do.”

Cameras aren't just shining a light on aggressive crowd control. Videos of police abuse at traffic stops, "stop-and-frisk" incidents and just about everywhere else litter YouTube, and according to the New York Daily News, the constant scrutiny is having an effect on rank-and-file officers. "The morale in the whole department is in the crapper," a veteran Bronx cop told the paper. "You can't be a police officer no more," he said. "You're a robot. You're under the microscope. You're under video surveillance. We feel like the perpetrators now, the way we're being displayed."

For photographer Carlos Miller, who runs the website Photography Is Not a Crime, which catalogs instances in which citizens are harassed or arrested for recording in public spaces, the answer to that is simple. “It's when they act like idiots that these videos go viral,” Miller told AlterNet. “If they acted professionally, the video would be boring and nobody would care. I have a friend who's a captain in a local police department, and he tells his guys that they should just always assume they're on camera,” he said. “If they abide by the law, then there shouldn't be a problem.”

Miller became an activist after being arrested for photographing public spaces in Miami in what he dismissively terms “the whole post-9/11 environment,” and since then he has tracked efforts to punish citizens for recording what they see around them. In three states – Maryland, Massachusetts and Illinois – people have been arrested on felony eavesdropping charges.

In Maryland, a motorcyclist named Anthony Graber was shocked when police raided his home, confiscated his computer and charged him with a crime punishable by up to 16 years in prison for recording a traffic stop. Thankfully, a judge threw out criminal charges in the case (leaving Graber with several traffic violations), ruling that a police officer on duty should have no expectation of privacy.

“We saw a sharp increase in those arrests last year,” said Miller, “but less this year because a lot of these cases were being thrown out of court and city attorneys began issuing memos saying, 'you really can't arrest people on wiretapping in these circumstances.' But they still happen.” What's more, “a lot of times you'll hear police threatening people with it. We had a video recently where this arrogant cop in Pennsylvania came up and threatened to arrest these people on wiretapping charges, but in Pennsylvania, there isn't even a law on the books.”

In Massachusetts, secretly recording police is a crime, but doing so openly is not. An Illinois law that requires police officers to give their express consent before being recorded is being challenged by the ACLU and other groups. “There's been a lot of litigation on whether we have the right to video the cops doing their job,” said Michael Ratner. “And it's been litigated for a reason: The last thing the cops want is to have the light put on them.”

That raises a question: Given that cameras are everywhere, and police feel, rightly, that they're operating under great scrutiny, why do we still see these apparently abusive acts ending up on YouTube? Are they unaware of the bad P.R. that flows from these images of abuse? NYCLU's Donna Lieberman thinks it's what you might call the “reality-TV effect.” The police department “is very conscious of the fact that they're under the microscope,” she said, “but as with any situation where you tell somebody, 'we're taping all the time,' you can't keep your guard up and be conscious of your behavior every second of the day and at some point you forget that you're in front of the camera and just behave like yourself.” She added that while “the vast majority of officers behave professionally, some number lose it, and the video cameras cry out for them to be disciplined.”