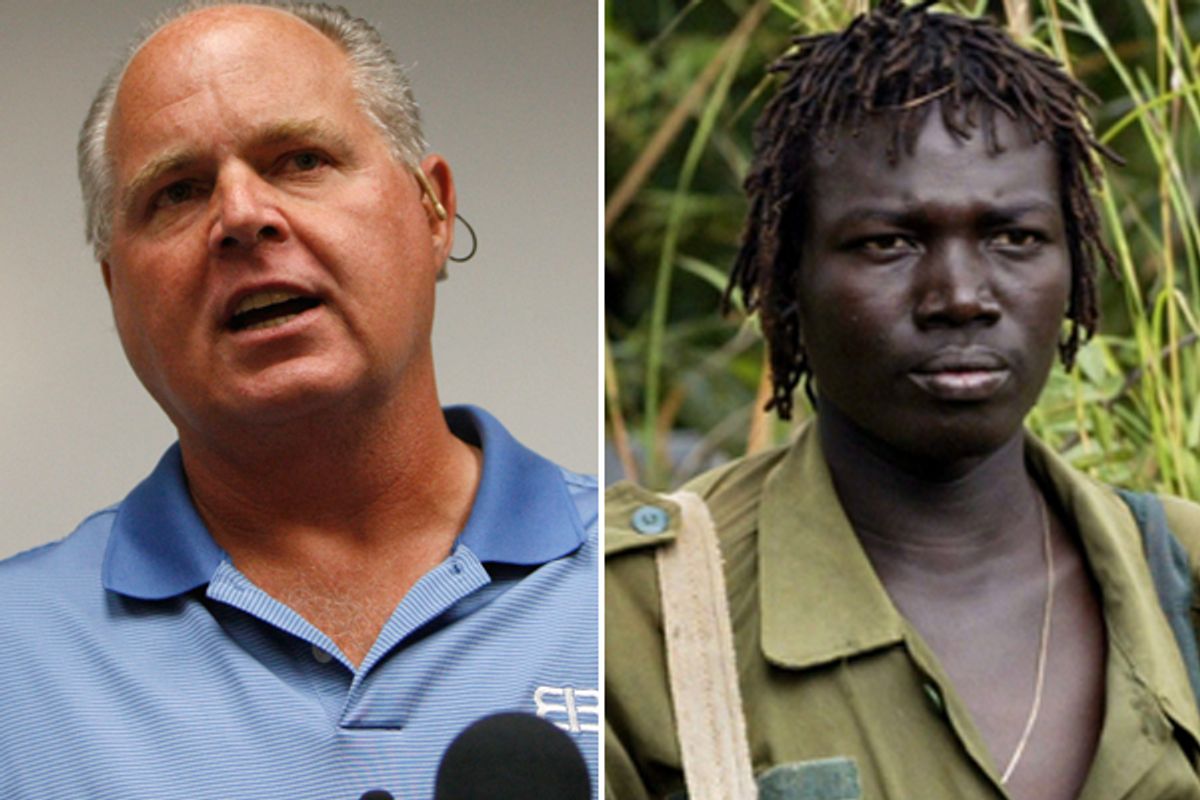 If you blinked, you might have missed it -- a recent movie called "Machine Gun Preacher." The film hasn’t burned up the box office and the title may have kept you away from your local picture palace in the mistaken belief that it was some kind of exploitation flick or the latest Quentin Tarantino exercise in postmodernism and ironic bloodbaths. In which case, who could blame you?

In fact, "Machine Gun Preacher" is the improbable but true story of Sam Childers (played by the improbable but true Gerard Butler, the shiny, muscle-bound Spartan king of "300" fame). After a misbegotten life as a violent biker/drug dealer/ex-con, Childers had a come-to-Jesus epiphany and became a born-again Christian with his own congregation in rural Pennsylvania. But it was when he heard a missionary speak about church work in East Africa that he found his true calling. He went on to build an orphanage in the Sudan and protect the kids there by becoming a vigilante fighting alongside the ill-equipped and undermanned local militia. That’s where the machine gun part comes in.

Apparently, Rush Limbaugh didn’t see "Machine Gun Preacher" either. If he had, he might have known a thing or two about the enemy Sam Childers was battling against: the Lord’s Resistance Army (LRA), a rabid rebel group that for some 25 years has made simple, day-to-day existence a living hell for civilians – especially children -- in Uganda, Southern Sudan, the Central African Republic and the Democratic Republic of Congo.

Instead, as is his usual way – in other words, not having any idea what he’s talking about  -- Old Motormouth Limbaugh recently defended the Lord’s Resistance Army on his radio program because they “are Christians. They are fighting the Muslims in Sudan.”

His defense came solely because anything or anyone Barack Obama is against must ipso facto be OK. President Obama has sent 100 military advisors to Africa to try to help end the LRA’s atrocities once and for all. But in the Gospel According to Rush, the enemy of my enemy is my friend, even if said friend engages in murder and mutilation.

“That’s a new war,” Limbaugh declared, “a hundred troops to wipe out Christians in Sudan, Uganda.” Yet just last Thursday the Lord’s Resistance Army was described by the evangelical Christian Post as “East Africa’s greatest evil … the region’s most malicious militia group.” The paper quoted Jedidiah Jenkins of the nonprofit group Invisible Children: “The LRA is an abuse of the Christian religion … a small, vicious cult.”

The New York Times has called the LRA “a notorious renegade group that has terrorized villagers in at least four countries with marauding bands that kill, rape, maim and kidnap with impunity,” and Reuters reports, “Over the years the LRA became known for chilling violence including what human rights groups say were the abductions of thousands for use as child soldiers or sex slaves, [and] brutal club and machete attacks on victims.”

Just ask former Bush White House chief speechwriter Michael Gerson. “The LRA is a brutal rebel group headed by a messianic madman,” he wrote in the Washington Post. “Its victims … have been the focus of activism by Christian organizations and human rights groups for decades.”

Presented with the inconvenient facts, Rush harrumphed, “Well, we just found out about this today. We’re gonna do, of course, our due diligence research on it.” A couple of days later Limbaugh admitted that he had been “misinformed,” then proceeded to laugh the whole thing off.

This lethal combination of ignorance and abject dismissal typifies the Republican right’s current approach to foreign policy, as evidenced by everything from Michele Bachmann’s suggestion that the Iraqi people reimburse the United States for the privilege of having had their country invaded to Herman Cain’s declaration that,  “When they ask me who is the president of Ubeki-beki-beki-beki-stan-stan I’m going to say, ‘You know, I don’t know. Do you know?’ … Knowing who is the head of some of these small insignificant states around the world I don’t think that is something that is critical to focusing on national security and getting this economy going.”

That jobs and the economy should be our first priority is a no-brainer, but in its zeal to simplistically reject all things governmental, the GOP is turning its back on decades of the experience, craft and skill essential to an effective, bipartisan foreign policy.  Nowhere is that more evident than the dilemma currently confronted by five-term Republican Sen. Dick Lugar of Indiana, a respected, conservative expert on global affairs now facing a serious primary challenge from Tea Party candidate Richard Mourdock, the state treasurer. Mourdock’s making political hay over Lugar’s mentoring of Barack Obama in the world of international relations when Obama was a freshman senator, a partnership brayingly portrayed in a Mourdock campaign video titled “Dick and Barry: The Unforgettable Bromance.”

Jacob Heilbrunn, senior fellow at the public policy Center for the National Interest (formerly the Nixon Center) wrote on the website of Foreign Policy magazine, “It isn’t just the career of the Senate’s senior-most Republican that is at stake here; it is an entire tradition of Republican foreign policy that is being repudiated by the party faithful.” This, he continues, “should evoke apprehension in anyone who thinks that America's leading role in the world has, by and large, been a force for good.”

Whether you agree with the decision or not, it is that perception of the American role as a force for good that partially informs Obama’s dispatch of military advisors to East Africa, a move that not only is consonant – so far -- with Congress’ 2009 passage of the Lord’s Resistance Army Disarmament and Northern Uganda Recovery Act, but also the Bush administration’s Operation Lightning Thunder in December 2008, when American military intelligence assisted African troops in an unsuccessful attempt to corner LRA leader Joseph Kony in eastern Congo. (According to Human Rights Watch, in retaliation after that failure, “the LRA attacked villages and towns in northern Congo and southern Sudan, killing more than 865 civilians during the Christmas 2008 holiday season and in the weeks thereafter.”)

President Obama’s new move in Africa jibes with the National Security Strategy he presented last year: “The burdens of a young century cannot fall on American shoulders alone,” he wrote, but “democracy does not merely represent our better angels, it stands in opposition to aggression and injustice, and our support for human rights is both fundamental to American leadership and a source of our strength in the world.”

Yet as Adam Serwer of Mother Jones points out, “The atrocities committed by the LRA aside, nations don't use military force out of altruism. Uganda provides a substantial number of troops for the African Union Force in Somalia, where the al-Qaeda linked group al-Shabaab has control over a significant part of that country. I have no doubt that Barack Obama believes that the world would be better off without Kony and the LRA. But although it hasn't been explicitly said, it's a good bet the Obama administration feels obligated to assist Uganda because Uganda is helping the US fight a proxy war against an al-Qaeda affiliate, a mission that hasn't been without cost for Uganda.”

Meanwhile, Rush Limbaugh and his right-wing cohort emptily natter on, chattering, as my old man used to say, just to hear their heads rattle.