The GOP is trying to turn their criticism of the protesters into a campaign weapon. It's a risky move 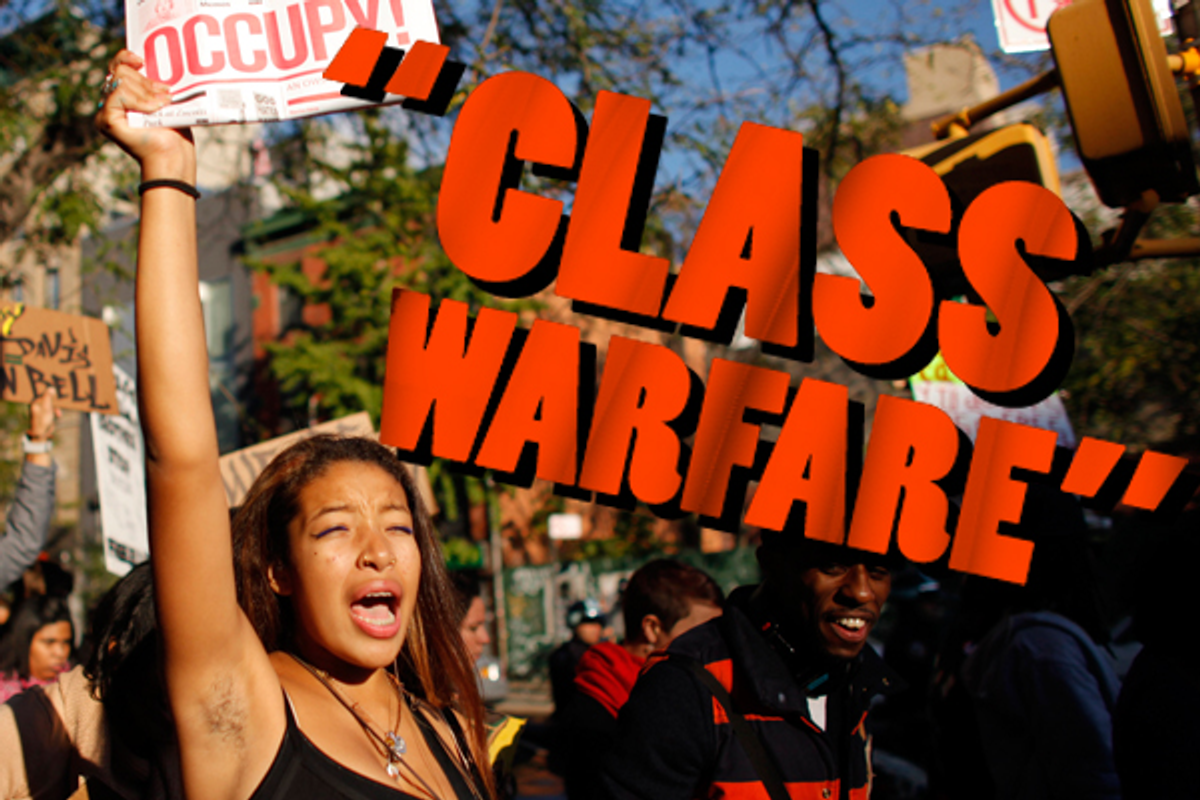 For a few weeks now, national Republican Party leaders have been insulting the Occupy Wall Street movement as everything from "dangerous... class warfare" to "mobs... pitting of Americans against Americans" to "an attack on freedom." These general rhetorical attacks attempt to distract from the fundamental -- and wildly popular -- messages of OWS. It's a bait-and-switch that harkens back to the tactics of Richard Nixon, who during the Vietnam conflict sought to distract from the popular anti-war message by focusing anger on the unpopular anti-war messengers.

Until this week, the GOP hadn't pulled the full Nixon by trying to turn their cultural criticism of Occupy Wall Street into a campaign weapon against Democrats. But, over the last two days, the Republicans have attempted that exact move in two hotly contested campaigns, one in Colorado another in Massachusetts.

It began on Monday with Republican Ryan Frazier, a citycouncilman now running in a heated race for mayor of Aurora, one of Colorado's biggest cities. Frazier, who just made a failed bid for Congress and has been billed as a rising GOP star, blasted out a robo-call to thousands of Colorado voters not only touting his endorsement by fringe-right-wing talk show host Sean Hannity, but also lashing out at his opponent for standing with the "Occupy Wall Street crowd."

A day later, the Washington Post reported that an even more overt version of this line of attack is emerging against Massachusetts Senate candidate Elizabeth Warren (D):

Warren was asked by the Daily Beast for a comment on the protests. She said: “I created much of the intellectual foundation for what they do. I support what they do.”

Now the NRSC has opened fire on Warren for the comments, blasting out an email containing links to stories about protesters in Massachusetts battling with cops... The NRSC is also circulating that Doug Schoen Op ed painting protesters as wild-eyed extremists and arguing that Dems who embrace the protests risk driving away independents and moderates, even though it was subsequently proven that Schoen’s conclusions were not supported by his own data...

National Republicans are placing their bet. They are wagering that the cultural instincts of the working class whites and independents who will decide this race ensure that the excesses of the protesters will make them less inclined to listen to her populist economic message, which is also directed at those voters.

If the OWS protests were the same as the anti-Vietnam War ones, this Republican bet would probably work. However, there's a big difference at play here. Unlike the protests of the 1960s against our imperial military adventures in Southeast Asia, OWS isn't nearly as susceptible to being pulverized by the patriotism cudgel. Indeed, while military actions almost inherently evoke red-white-and-blue-drenched tensions about loyalty to our beloved troops, OWS is going up against faceless, universally hated multinational corporations. That makes it harder to paint OWS as unpatriotic or unsympathetic to our fellow countrymen.

This is why for all the GOP's overheated anti-OWS rhetoric, a new poll shows Americans strongly support the movement. The Republicans likely realize this, of course, which would explain their redoubled efforts to demonize the movement in election settings. But as any blackjack player knows, doubling down can just as easily deliver big losses rather than gains -- especially when you are making a risky wager. During a crushing recession that has seen economic inequality skyrocket, vilifying OWS would seem to be a particularly dangerous bet.