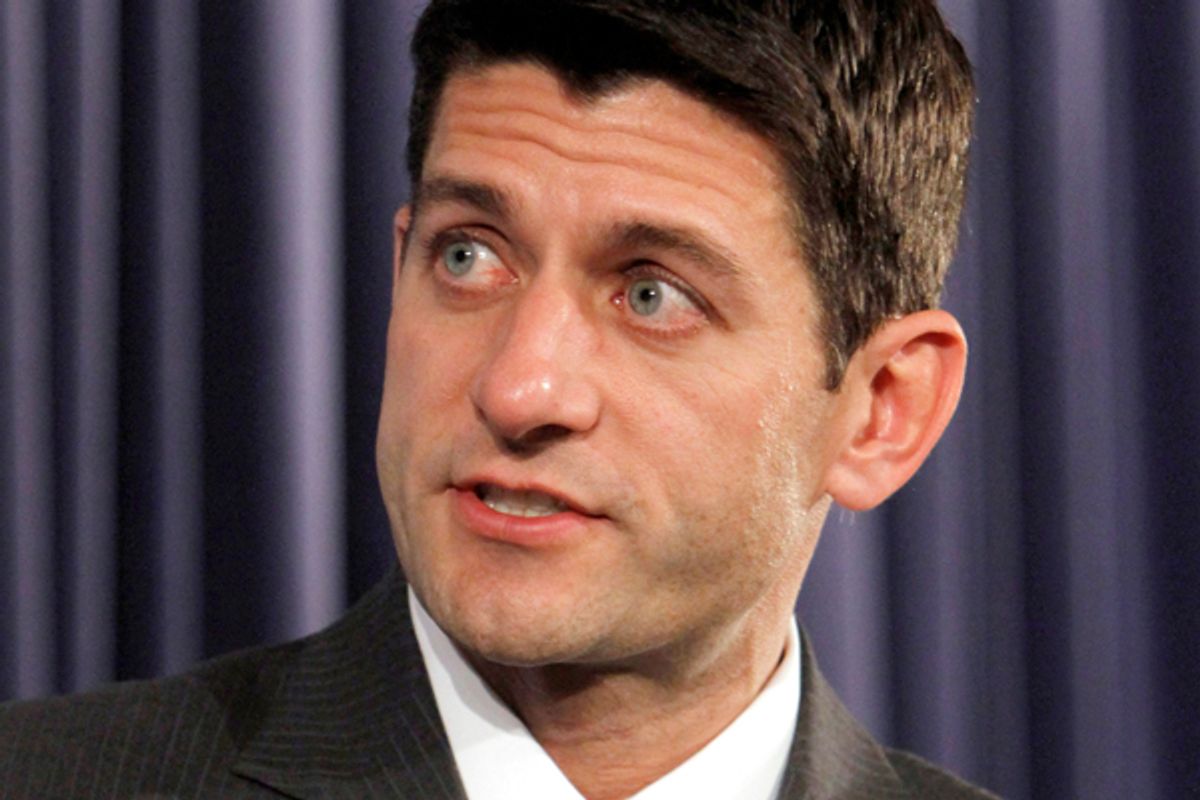 Rep. Paul Ryan, architect of a plan that would essentially privatize Medicare and that virtually every House Republican rallied around this spring, delivered what amounted to his party's rebuttal against President Obama's jobs bill crusade and his attacks on GOP obstructionism.

In a Heritage Foundation address, Ryan leaned heavily on accusations of "class warfare," arguing that Obama's proposals embody "a false morality that confuses fairness with redistribution, and promotes class envy instead of social mobility." Keep in mind that the individual components of Obama's jobs plan -- aid to state governments to add and preserve teacher and firefighter jobs, increased infrastructure spending, an extension of payroll tax cuts, and a surcharge on incomes over $1 million -- actually enjoy wide public support, even in many instances among Republicans; these are not ideas that instinctively strike most Americans as creeping socialism. Ryan's entire speech is screaming for a rebuttal of its own, and Greg Sargent has put together a terrific one that's well worth your time.

But one particular part of Ryan's remarks is worth singling out, because it may help explain why Obama is struggling to win his fight with the GOP:

To my great disappointment, it appears that the politics of division are making a big comeback. Many Americans share my disappointment – especially those who were filled with great hope a few years ago, when then-Senator Obama announced his candidacy in Springfield, Illinois.

Do you remember what he said? He said that what’s stopped us from meeting our nation’s greatest challenges is, quote, “the failure of leadership, the smallness of our politics – the ease with which we’re distracted by the petty and trivial, our chronic avoidance of tough decisions, our preference for scoring cheap political points instead of rolling up our sleeves and building a working consensus to tackle big problems.”

This is one of the oldest tactics in politics, taunting an elected official with the lofty promises he made as a candidate, but it's also an effective one in a climate like this, with economic anxiety soaring. Most swing voters pay very little attention to what is happening in Washington or in politics in general, and when it comes to assessing a president's performance, they tend to work backwards -- first deciding whether want to side with him, then coming up with reasons why. Because the economy is in awful shape, swing voters are now inclined to turn on Obama -- even if he's arguing for ideas that they largely agree with and even if Republicans are making it impossible for those ideas to be implemented. Put aside the rest of Ryan's speech: In the excerpt above, he's offering these swing voters an easy-to-swallow rationale for concluding that Obama has failed. It calls to mind a quote that Sargent recently flagged, from a voter who backed Obama in 2008 but who is now having buyer's remorse:

“If Romney and Obama were going head to head at this point in time I would probably move to Romney,” said Dale Bartholomew, 58, a manufacturing equipment salesman from Marengo, Ill. Bartholomew said he agrees with Obama’s proposed economic remedies and said partisan divisions have blocked the president’s initiatives.

But, he added: “His inability to rally the political forces, if you will, to accomplish his goal is what disappoints me.”

This is the single biggest obstacle that Obama faces in his effort to win a second term. If swing voters decide that they don't want to reelect him, they'll come up with a reason why -- and Republicans like Ryan will be happy to help them.