How to spot a (graphic) knockoff

No, those aren't real Pepsi briefs. But the counterfeiters' logo reproduction and typography are nearly perfect 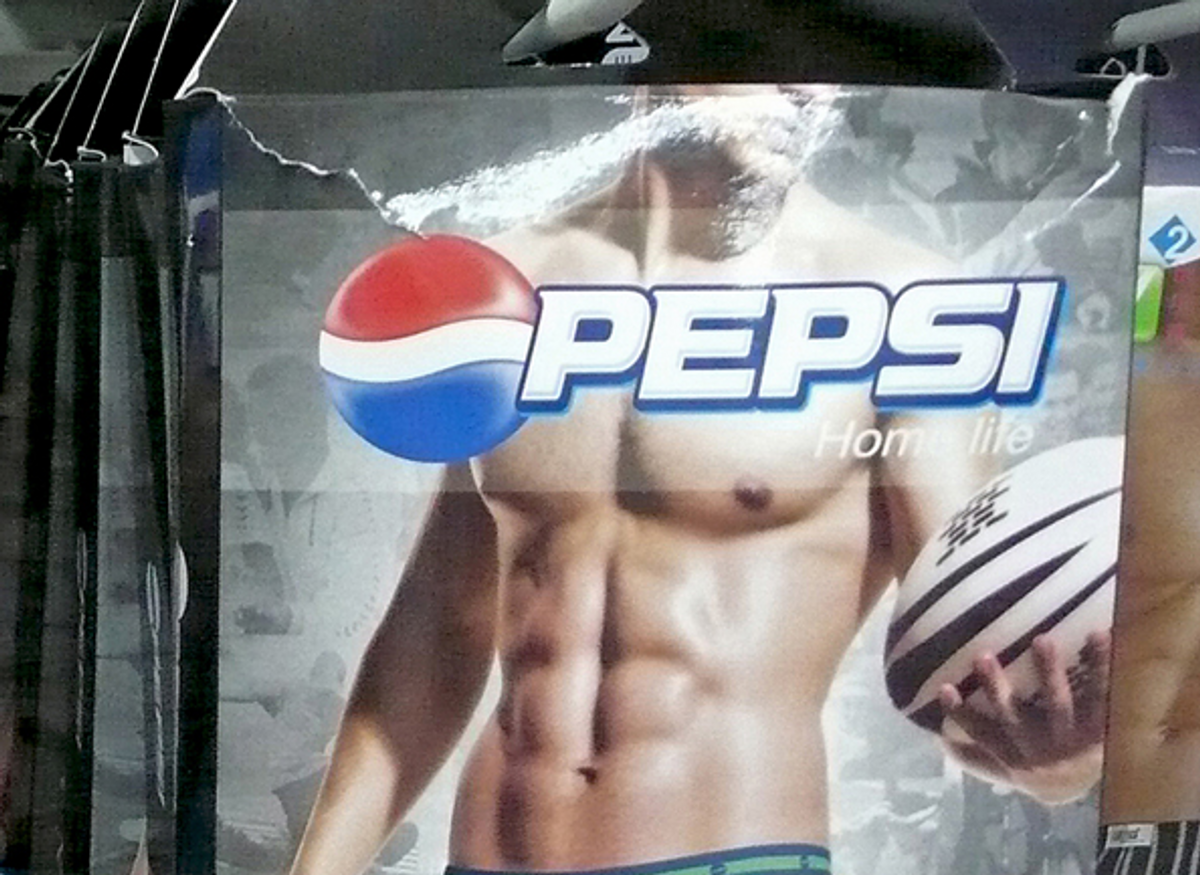 Product packaging spotted at the Wumart (I kid you not) in Beijing.

Are these REAL Pepsi briefs, or is this the ultimate in knockoffs? I asked Lisa Francella, senior director of Visual Identity and Branding Extension at Pepsico Inc. in Purchase, N.Y. “I know this is not a package that I approved!” was her answer.

Like many knockoffs in China—sold in wholesale markets, shops, and on the street—the packaging, hang tags, and merchandise itself fool the eye. The logo reproduction and typography are so realistically done that an experienced graphic designer can’t tell the difference. On most counterfeit packaging, for, say, North Face or Nike apparel, the English is perfect. Which is amazing in a country where it’s typical to ponder over such menu items as “Mossiness and Fried Dried Peas” and “Adding Up Fried Shrimp’s Balls.” Counterfeiters avail themselves of excellent scanning and printing technology; they put the care into it because for them it’s like printing money.

The People’s Republic of China, with a population of 1.4 billion, is the second-largest market for Pepsico after the United States. The company, which operates in 148 counties, has since the 1980s made a $1 billion investment in China, licensing its trademarks for beverage and food products and opening plants in most major cities.

[caption id="attachment_228294" align="alignnone" width="445" caption="What does the small text say? One guess: “Pepsi gives you six-pack abs, and a package she will appreciate.”"]

You might find the idea of Pepsi men’s underwear in a Wumart comical. But to a soft-drink and snack-food company trying to maintain a clean-cut, all-American image, the suggestion of erections might not be the most welcome type of brand extension. How can Pepsi and other companies protect their overseas investments? According to Julius Rabinowitz, a trademark and copyright attorney who has won cases fighting knockoffs of many big international brands, “You monitor it. You scour the marketplace. You send people over and you hire people locally. You make reporting infringements worth their while by paying them more than the bribes they’d get to look the other way.”

And if you see something, say something, right? “Yes,” says Julius, who, in the interest of full disclosure, is my husband and was in the Wumart when I spotted the underwear. “If you work for a company and see something that looks suspiciously like trademark infringement or counterfeit merchandise, report it to headquarters. They have to make the decision whether it’s worth it to try to try to stop the infringers in court. They’d need to hire a local law firm. It could take up to two years and cost $100,000 or more. And they still might not be able to stop it. In the U.S., we have a culture, courts, and enforcement procedures that are pro-trademark, that honor trademark interests. In China, they do not.”

One tip-off for the underwear: It’s 2011 and these packages still sport the 1971 logo, not the Arnell Group update unveiled in 2008. An update that was not universally appreciated.

Closer to home, U.S. designers are getting increasingly upset over the proliferation of name-your-price websites that make such offers as: “Host your very own design contest where thousands of talented designers compete to create a logo design you love, or your money back.” To add injury to insult, many elements in the “winning” designs are stolen from legitimate logos. Design a logo with a lotus icon for a yoga studio today, and next week your icon is on Lotus Brand Rice in Singapore or Frank Lotus Ford Dealership in Pittsburgh. Your icon may have traveled globally via the circular route: Elements of U.S. logos become part of vast libraries of pictorial elements used by teams of graphic artists, many of them in Asia, who crank out stuff for the guys who run online contests patronized by U.S. business owners lured by the promise of a cheap logo.