Mitch McConnell committed the GOP to blocking his agenda before Inauguration Day. Finally he's fighting back 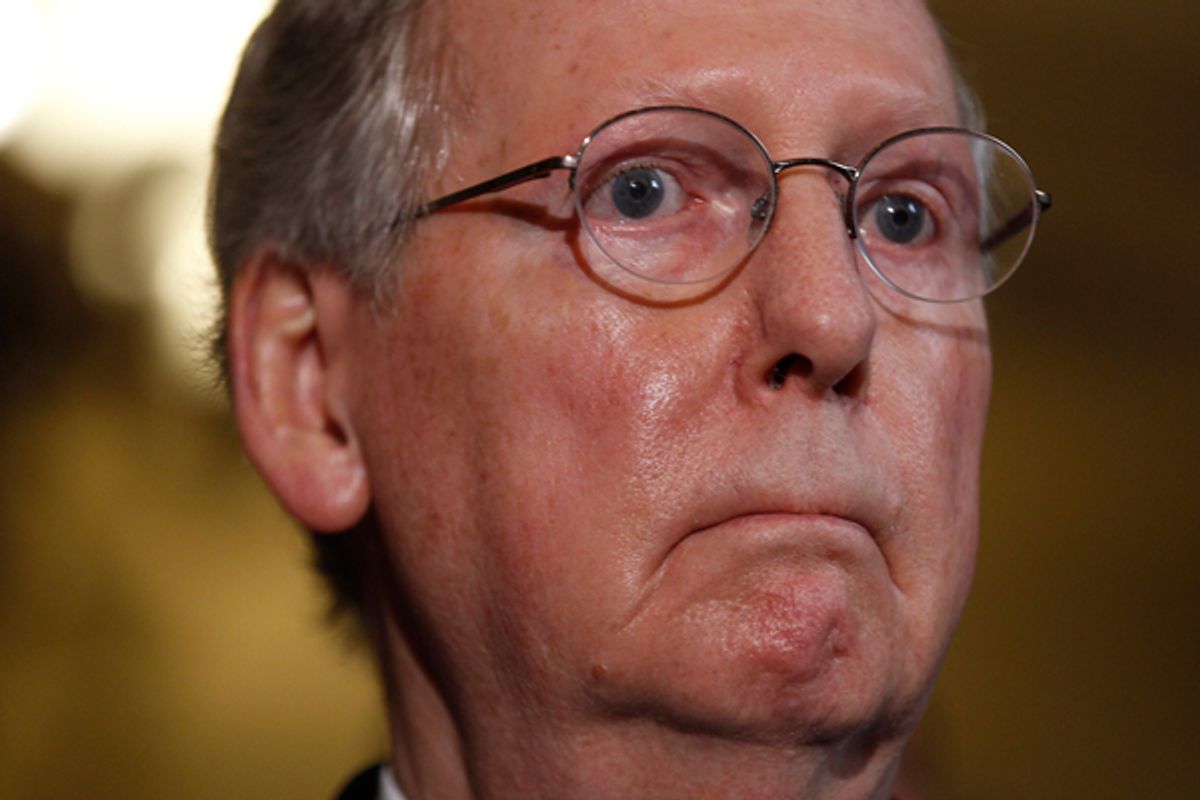 If Senate Minority Leader Mitch McConnell doesn't want to be portrayed as a "villain," he should stop acting like one. On Sunday, McConnell complained about President Obama's efforts to make Republicans the bad guys for blocking his jobs bill. Now Obama's taking the fight directly to McConnell, and it's about time.

On CNN's "State of the Union" Sunday, McConnell objected to the idea that the federal government should provide the funds to keep cops, firefighters and teachers on the job.

"They are local and state employees," McConnell said. "The question is whether the federal government can afford to be bailing out states. I think the answer is no." He went on to whine, "Their story line is that there must be some villain out there who’s keeping this administration from succeeding."

On his West Coast tour Obama is hitting McConnell directly, and he's picked a great target. In Las Vegas yesterday, and again in San Francisco, he mocked McConnell for calling the effort to keep first responders on the job "a bailout," as though they were irresponsible Wall Street banking firms that got taxpayer support. "These aren't bad actors who somehow screwed up the economy. They didn't act irresponsibly. These are the men and women who teach our children, who patrol our streets, who run into burning buildings and save people. They deserve our support."

McConnell makes a perfect villain because, in fact, his obstruction didn't start last week. He's been forcing his caucus to stick together to thwart the president since before he was sworn in. As GOP Sen. Lindsey Graham told the New York Times in March 2010, McConnell summoned his dispirited Republican caucus to the Library of Congress two weeks before Inauguration Day, when the president's approval rating stood above 70 percent.

"We came in shell-shocked," Graham recalled. "There was sort of a feeling of ‘every man for himself.’ Mitch early on in this session came up with a game plan to make us relevant with 40 people. He said if we didn’t stick together on big things, we wouldn’t be relevant." On healthcare reform, McConnell himself told the New York Times: “It was absolutely critical that everybody be together because if the proponents of the bill were able to say it was bipartisan, it tended to convey to the public that this is O.K., they must have figured it out. It’s either bipartisan or it isn’t.”

In an Atlantic profile of McConnell, Josh Green observed: "Obama could not evolve into a post-partisan leader, because McConnell wouldn’t let him. He pegged Obama as either too narcissistic or too naive to recognize that his promise of a harmonious new age was beyond his capacity to deliver. Harmony is easily withheld." Former Utah Sen. Bob Bennett, a McConnell ally, compared the minority leader to a saboteur. "McConnell knew the places to go, around the tank, and loosen a lug bolt here, pour sand in a hydraulic receptacle there, and slow the whole thing down," Bennett told Green.

Despite all of this evidence of McConnell's bad faith, the president continued to try to make him a partner. It seems as though something snapped after the debt-ceiling debacle, when public opinion polls showed even Republican-leaning independents thought Obama should have fought back harder against Republicans. He's doing so now, and it's wonderful to see. McConnell is trying to work the refs with his whining, hoping the media will take his side. And it's not a crazy fantasy, given too many reporters' reliance on "false equivalence" templates. But McConnell deserves everything Obama is dishing out, and then some.

Chris Matthews and I discussed Obama vs. McConnell on MSNBC's "Hardball" Tuesday.