The first-ever fulfillment of a Pat Robertson prophecy 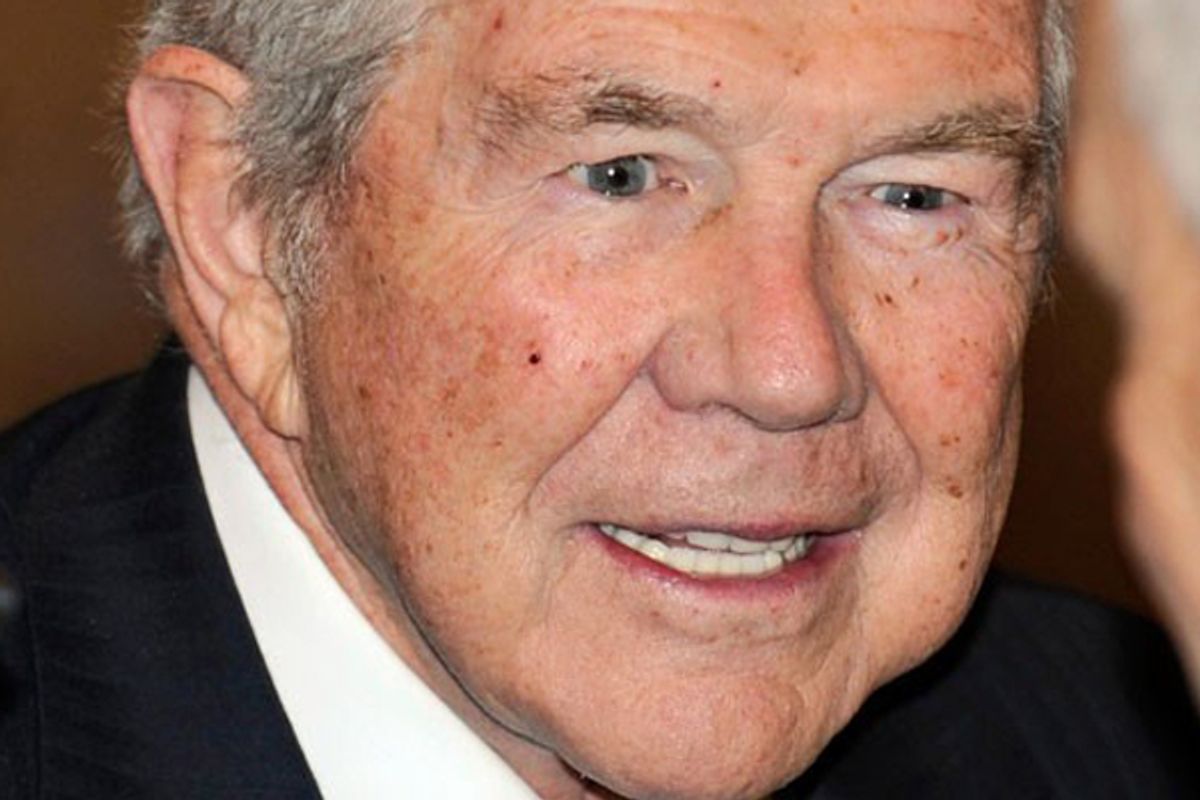 On Monday's "700 Club," Pat Robertson expressed his fear that purity-obsessed conservatives were at risk of forcing otherwise electable Republican candidates into taking politically poisonous positions that could jeopardize the GOP's chances of recapturing the White House next year. As the televangelist, a presidential candidate himself back in 1988, put it:

Those people in the Republican primary have got to lay off of this stuff. They're forcing their leaders, the frontrunners, into positions that will mean they lose the general election...You’ll appeal to the narrow base and they’ll applaud the daylights out of what you’re saying, and then you hit the general election and they say, ‘No way!’ And then the Democrat, whoever it is, is just going to play these statements to the hilt. They’ve got to stop this! It’s just so counterproductive. Well, if they want to lose, this is the game for losers.

Yesterday, about 12 hours after Robertson issued his warning, a dramatic illustration of this "game for losers" began playing out -- and it now has Mitt Romney, probably the strongest candidate the GOP could field next year, facing a loud and potentially problematic backlash from some of his party's most influential voices.

The triggering event was a visit Romney paid late yesterday morning to a campaign office in Cincinnati, where local Republicans were calling voters about two measures that will be on Ohio's statewide ballot in two weeks. One would repeal Senate Bill 5, a plan to curb public employees' bargaining rights and mandate pension and healthcare contribution levels that Governor John Kasich and the GOP-controlled legislature enacted earlier this year. The other would bar the state from imposing an individual healthcare mandate. The phone bank was urging opposition to SB-5 repeal and support of the mandate ban. The trouble came when reporters asked Romney -- more than once, according to CNN's report -- to state his position on the ballot measures:

"I am not speaking about the particular ballot issues," Romney said, only after repeated questions from reporters. "Those are up to the people of Ohio. But I certainly support the efforts of the governor to reign in the scale of government. I am not terribly familiar with the two ballot initiatives. But I am certainly supportive of the Republican Party's efforts here."

It's easy enough to see what was going on here. Ohio figures to be a crucial swing state in the 2012 presidential race and SB-5 is actually very unpopular in the state. The most recent survey, released earlier this week by Quinnipiac, shows the repeal side winning by a 56 to 33 percent margin -- with just 32 percent of independent voters saying they want to keep the law. It is also an unusually contentious issue, one that has dominated Ohio politics this year and a main reason that Kasich, according to the same Quinnipiac data, is saddled with a 36-52 percent job approval rating.

This explains why, according to CNN, Romney "did not advertise the visit to reporters" and why Kasich didn't accompany him to the call center. And it's why he strained to avoid going on the record supporting SB-5. (It's also worth noting that Romney essentially endorsed SB-5 back in June -- before its unpopularity had cemented.) This is the standard balancing act for most primary season front-runners, trying to do and say just enough to keep the party base happy without doing or saying anything that will give your general election opponents ammunition.

But Romney is not a standard frontrunner, and the 2012 GOP race is not a standard nominating contest. Romney remains haunted by the cultural liberalism and economic pragmatism that defined the Massachusetts phase of his political career, while (as Robertson noted) the Obama-era GOP base is demanding rigid ideological conformity. And from Romney, they're also demanding proof that they can trust him and that he'll stand strong for their principles as president, especially when the pressure to sell them out is intense.

In a way, this makes SB-5 a perfect test of Romney's commitment. The general election incentive to stay away from the topic is obvious, but "government unions" are among the right's favorite bogeymen these days. And with his wishy-washy non-answer, Romney flunked the test and confirmed everything that conservative skeptics have been saying about him. The abuse began almost instantly.

"This is a huge freaking deal," Red State's Erick Erickson wrote. "Playing it too safe is finally biting Romney in the rear end." An official with FreedomWorks, Dick Armey's D.C.-based Tea Party group, pronounced himself "not surprised. He doesn’t believe in what we believe in –- nor is he willing to fight for these ideas." And the Club for Growth, nothing that Romney had not hesitated to endorse a right-to-work initiative in New Hampshire earlier this year, provided a harsh statement to the Washington Post's Greg Sargent:

“The big problem many conservatives have with Mitt Romney is that he’s taken both sides of nearly every issue important to us. He’s against a flat tax, now he’s for it. He says he’s against ObamaCare, but was for the individual mandate and subsidies that are central to ObamaCare. He thinks that collective bargaining issues should be left for states to decide if he’s Ohio, but he took the opposite position when he was in New Hampshire. This is just another statement in a long line of statements that will raise more doubts about what kind of President Mitt Romney would be in the minds of many Republican primary voters.”

And so on. It didn't take long for Rick Perry, who is desperately trying to reassert himself as the main Romney alternative for conservatives, to chime in with his own unsolicited endorsement of SB-5.

What can Romney do now? Well, he could backtrack, claim he didn't hear the questions properly or wasn't specific enough in his responses, and express full-throated support of SB-5. But this would hardly address the trust issues the right has with him, since his reversal would have come under duress. Plus, shifting gears now would also reinforce in a very public way Romney's image as a spineless flip-flopper, a theme that Democrats will play up if he's the GOP candidate. So maybe his best bet is to ride out the storm, saying no more and hoping the political world starts talking about something else soon; the damage might not be too severe, given the weakness of his GOP rivals and the right's failure to date to settle on a clear Romney alternative.

But whatever course he settles on, there's a bigger problem for Romney: This episode will constrain him the next time he's forced to choose between the GOP base and general election considerations. In other words, maybe he can get away with this one -- but what happens if, say, he's asked at the next debate to repudiate Perry for dabbling in birtherism? Will Romney be confident that he has enough wiggle room with the right to respond with language that wouldn't come back to haunt him in the fall? Or will the SB-5 incident give him pause: I've already got enough headaches with the right, so I probably shouldn't antagonize them too much here...

Which, of course, is precisely the situation that Robertson warned about on his television show. And you thought he lost his powers after praying away that Hurricane all those years ago...

UPDATE: Appearing in Fairfax, Va. this morning, Romney apparently apologized for any "confusion" and declared his complete support for SB-5.

I talked about Robertson's comments and Romney's slip-up on MSNBC's "Politics Nation" with Al Sharpton last night. Here's the segment: