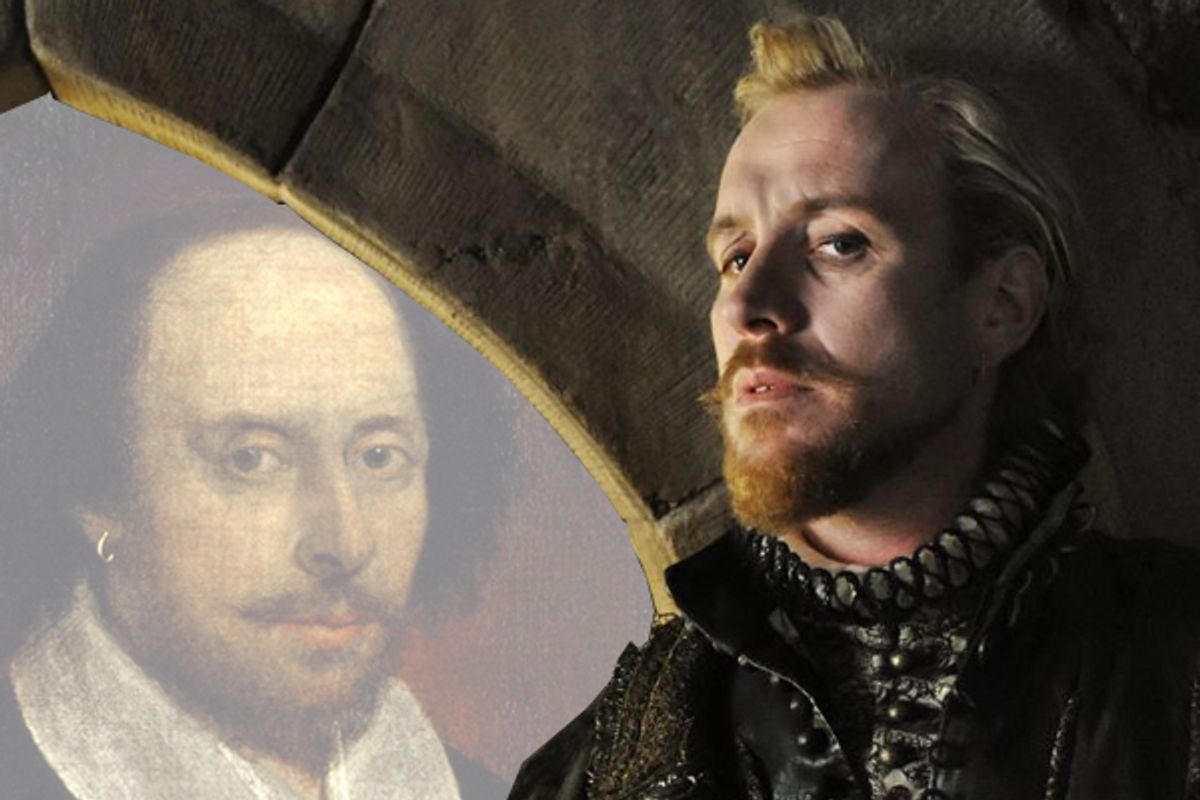 Roland Emmerich's "Anonymous" is not the first anti-Stratfordian film -- see the 2003 documentary "Much Ado About Something," which advances the notion that Christopher Marlowe wrote the plays attributed to William Shakespeare -- but it's probably the truest to the cockeyed cause. That is, it shows the same weak grasp of Elizabethan cultural practices and society, the same willingness to contort or ignore inconvenient facts, the same thinly veiled, romantic investment in the British class system and, above all, the same hunger for preposterous, potboiler intrigues.

At the early screening I attended, a filmgoer could be heard expressing his concern that "kids," seeing the movie, "will think it's history." Rest assured, my friend. To interpret "Anonymous" as history, those kids will first have to be able to follow it -- something even people fairly familiar with the history itself will have a hard time doing. Emmerich, the creative force behind "Independence Day," "The Day After Tomorrow" and "2012," struggles mightily to squeeze the intricacies of Elizabethan politics into a blockbuster formula, a task that is probably impossible for anyone, and certainly so for him.

The result is a bombastic, flashback-ridden farrago of skulking villains, scenery-chewing actors, sub-"Ivanhoe"-style dialogue ("If he is to be my king, then it is my sacred duty to be with him in battle") and what seems like a dozen pretty, flaxen-haired men storming in and out of rooms in snits. Through it all, Rhys Ifans -- playing Edward De Vere, Earl of Oxford and current favorite among the 50-plus candidates proposed as alternate authors of the plays -- swans around wearing a fixed half-smile of campy soulfulness, exactly as Vincent Price might have played Jesus.

Being largely incomprehensible, "Anonymous" seems unlikely to stimulate much thought on what's known as the "authorship debate." This is no "The Da Vinci Code," despite its roots in a similarly convoluted conspiracy theory involving clandestine lineages, elaborate codes and people who inexplicably try to keep secrets by implanting clues about them in works of art.

Nevertheless, by attempting to weave the fancies of the Oxfordians into a coherent narrative, "Anonymous" does highlight the over-the-top melodrama inherent in anti-Stratfordianism itself. The Earl must keep his authorship of the plays concealed because they are too politically provocative, yet the man commonly thought to have written them (a drunken, whoring, unlettered actor named Will Shakespeare) suffers no political repercussions. Oxford must keep it secret because writing poetry is a scandalous practice that is somehow causing him to go broke (which would have been news to Sir Philip Sidney, Sir Walter Raleigh and Edmund Spenser -- or the actual Earl of Oxford, who did in fact publish poetry under his own name).

Above all, the truth must be covered up for all eternity because Oxford had an incestuous affair with Elizabeth I and if anyone finds out about the plays they will somehow automatically find out about the affair. (It's a wonder Elizabeth ever had time to fend off the Spanish Armada or perform any other royal duties, given the litters of illegitimate children she's alleged to have popped out in this film.) The playwright Ben Jonson is portrayed as the Earl's primary collaborator in this subterfuge, although pretty much everyone at court and in the theater business knows the score. That no one breathed a word of this for 200 years testifies to the well-known secret-keeping abilities of actors and courtiers.

For those curious about anti-Stratfordianism as a cultural phenomenon, James Shapiro, a professor of English and comparative literature at Columbia University, has written the excellent "Contested Will," a book that traces the initial challenges to Shakespeare's authorship to the 19th century. He see two closely related factors as its cause; escalating bardolatry and the emergence of biographical literary criticism. The pragmatic, middle-class actor glimpsed in the surviving official documents pertaining to Shakespeare's life could not be reconciled with the blossoming Romantic icon of the poet as a dreamily sensitive, semi-divine being. A better, more easily idealized candidate had to be found.

As with all conspiracy theories, the historical facts are at once the object of obsessive argument and ultimately beside the point. The story is what matters, and a centuries-long hoax featuring transgressive sex; scheming grandees; concealed documents; a handsome, tragic nobleman and the toppling of a cultural idol makes for a much better yarn than the reality that genius does sometimes bloom in prosaic circumstances. There's no movie in that! The problem with history is that sometimes it just doesn't play, and as a great man once observed, the play's the thing.

Salon's review of James Shapiro's "Contested Will: Who Wrote Shakespeare?"

The Shakespeare-Oxford Society website, "dedicated to researching and honoring the true bard"

Information on "Much Ado About Something," a "Frontline" documentary favoring the Marlovian theory

Salon on "Much Ado About Something"