Why I refuse to text message

I don\'t care how convenient it is, or how many friends pity me for my decision. I\'m holding out -- here\'s why 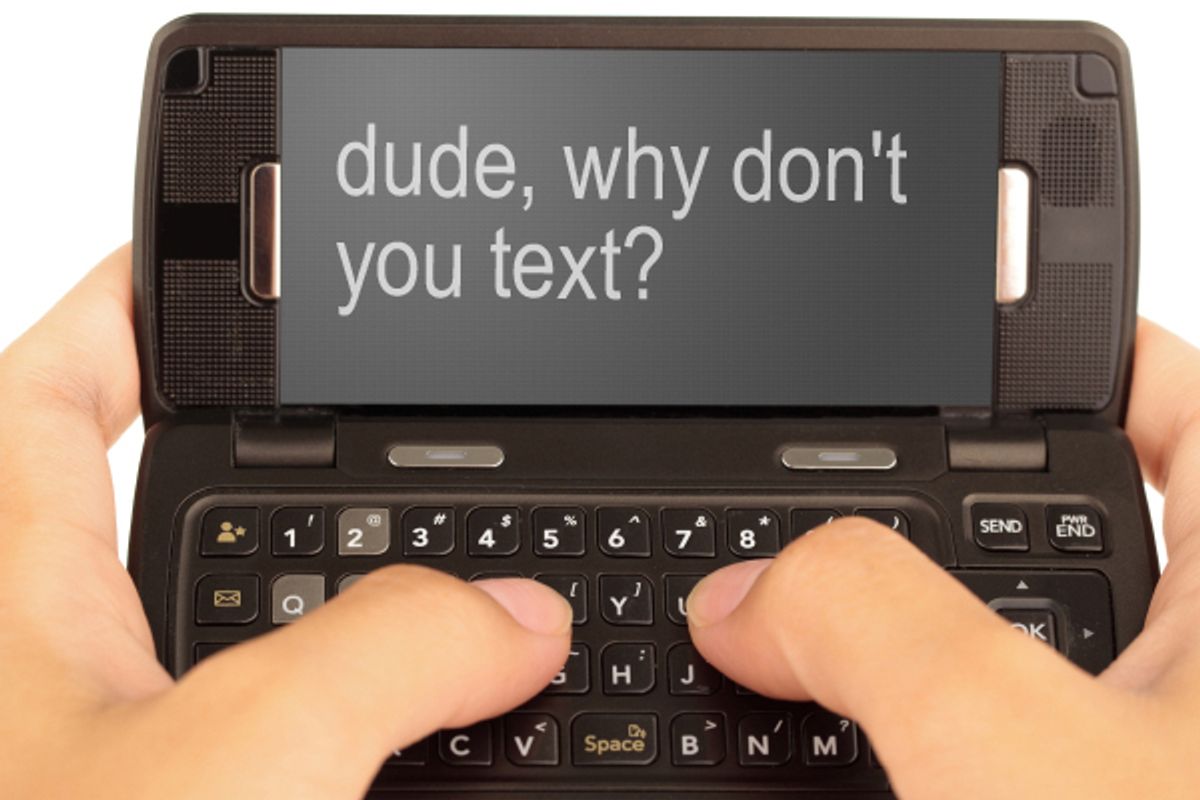 Three years ago I received a text message that read: “Dude, you have another book coming out?” Naturally, the text was unsigned. In lieu of a signature, I was provided a New York City phone number, which I did not recognize.

Not wanting to be rude, particularly to someone from New York City asking about a book, I decided to text back a response, something I had never done before.

I wanted to type, “Who are you?” But I knew that no one actually types out words such as “are” and “you” anymore. I also had no idea how to make a space between words, or a question mark. I wound up typing: Whoru

Almost immediately, I received this: Did you just call me a whore?

I frantically thumbed my reply, making a couple dozen errors on my way to this gem: nosorrydontknowhowtotext.

It never occurred to me simply to call the number and speak to the human who sent the message. That seemed somehow too forward. If my interlocutor had wanted to talk on the phone, after all, he or she would have called.

In the spirit of full disclosure, the texter in question turned out to be my editor at Salon. (Hi, Sarah!) She has not texted me again.

Now look: I am not one of those cranky old Luddites who greets every new technological innovation as another chink in the armor of civility. Nor am I seeking to indict, or inflame, the growing legion of texters. I certainly understand the appeal of text messages. It’s a form of communication that suits the American lust for efficiency. Why engage in a whole awkward, messy human conversation if all you need to do is transfer information, or a quick anodyne sentiment?

I also realize that people who are younger than me (people who don’t, for instance, remember a time when Apple was a record label) have grown up communicating primarily by typing into machines. To them, it feels more natural to use little blips of prose than to speak directly, in real time, on a telephone.

But it is worth pointing out that in the past few years the culture of communication in the developed world has undergone a pretty radical shift. You either text, or you don’t text -- and the fault line between these two camps grows ever wider.

We’ve now reached the point where texters feel empowered to be openly hostile to those of us who can’t, or won’t, text. Email is, to them, a laughably primitive medium, akin to smoke signals. And thus I keep hearing the same condescending four-word refrain: “Why didn’t you text?” Or sometimes, “Check your texts, dude.”

The world of texters is sort of sorry I missed that rendezvous and that magazine assignment and that free ticket to the Red Sox. But mostly, they’re sorry I’m a sad loser who doesn’t text.

A few weeks ago, for instance, I visited friends in Portland. I kept calling them on their cellphones, and they kept replying with text messages. I eventually met up with one of them at a bar. But before we could even speak a word to one another, we had to deal with this accumulated tension.

And thus I began (as I so often do) by asking just the wrong question. “Don’t you ever talk on the phone anymore?”

My friend narrowed her eyes. I suspected she was furious. I certainly was. But rather than telling me to go to hell, she turned to a third friend and explained, “He doesn’t text.” What struck me was her tone. It wasn’t cruel so much as pitying. She might as well have said, “He doesn’t drive.” Or perhaps, “He doesn’t know how to read.”

I continue to receive text messages from people who clearly know me. Mostly, they’re writing because my name has somehow come up in conversation. It’s a sweet impulse, in other words. But because I only see their message and a phone number (since they're apparently not close enough to be saved in my contact list) I usually have no idea who they are.

Weeks, or sometimes months later, when I see them again, they’ll ask if I ever got their “message,” and I’ll say no, because I assume they mean a phone message. Then they think I’m lying. And I’m left to ponder why they’re guilt-tripping me. And really, the best result I can hope for is that we reach that familiar text/non-texter impasse, which ends with them asking, “Dude, why don’t you text?”

In the grand scheme of things this is penny-ante stuff. The reason I find the text revolution so dispiriting has more to do with the actual human dynamics of our culture.

By which I mean that there’s a growing tribe of people whose bodies may be situated in a public setting, such as seated across from you in a restaurant, but whose brains and heart belong to a device.

This was true in the age of the Palm Pilot, oh so many years ago. But the Palm Pilot geeks (my brother was one of them) were still sort of outliers. You could listen to them go on about how they’d just organized their entire event calendar and cross referenced it with their budget spreadsheet and the whole thing was, you know, kind of cute in a wonky way.

Then came the BlackBerry vanguard. But that seemed limited to frantic and overachieving business people.

With the advent of smart phones, I often feel the entire culture is suffering from a perpetual and pervasive case of attention deficit disorder.

By which I mean that when I’m talking with someone, I’m also, implicitly, competing with their device, and with all the other people they might want to text -- or tweet or chat or message -- rather than talking to me.

This is especially mortifying in my creative writing classes. Students these days don’t even try to hide the fact that they are engaged in one or more text conversations during class. I see them every time I teach, glancing furtively at the device on their lap, thumbing out acronymic dispatches.

There’s really not much to say in defense of such conduct, except, I suppose, that college students have always been distracted creatures.

The fact that people my age -- in our 40s, that is -- are subject to the same kind of nonsense strikes me as sad. And I myself am sad when I begin to drift away from a conversation, itching to find a computer where I can check my email or surf the Net.

The turn away from phone conversations, and toward texting, is a part of this larger evolution. As a species, we’re becoming glib and skittish and nervous about intimacy.

Friends of mine who are texters have argued that I should view the practice -- along with Twitter -- as a turn toward the written word.

But my own impression is texts (and tweets) are pretty much the opposite of literature. They’re not about making a deep connection, or initiating a discussion, but proving our superior wit. They serve a kind of bureaucratic emotional function, by putting our consideration on the record, our flickers of affection.

I recognize this pattern from my own emailing habits, all those dashed-off one-liners that are intended simply to prove I’m a nice guy. Or at least not a jerk.

The shift from emails to texts simply accelerates the process by which people are holding their own internal lives at bay. After all, if some future editor had the misfortune of combing through an archive of your text messages, I doubt she would find much that revealed who you truly were. Instead, the record would show that you had trouble making plans, that you liked to quote characters from a particular television show, that you hoped to run into a number of folks, but wound up missing most of them.

There’s no doubt that joining the text revolution would save me time, especially now I’ve finally gotten one of those “slide” phones that has a full keyboard. But I have no plans to do so. It feels like another one of those deals where I’m trading convenience for a tiny part of my soul.

I’m not trying to be a jerk. I’m just trying to hold on to a few of the inefficiencies that make us human.