Beavis and Butt-head shocker: 14 years later, but no more mature

Huh-huh, huh-huh. They made a comeback. But for MTV\'s cartoon delinquents, it might as well still be 1997 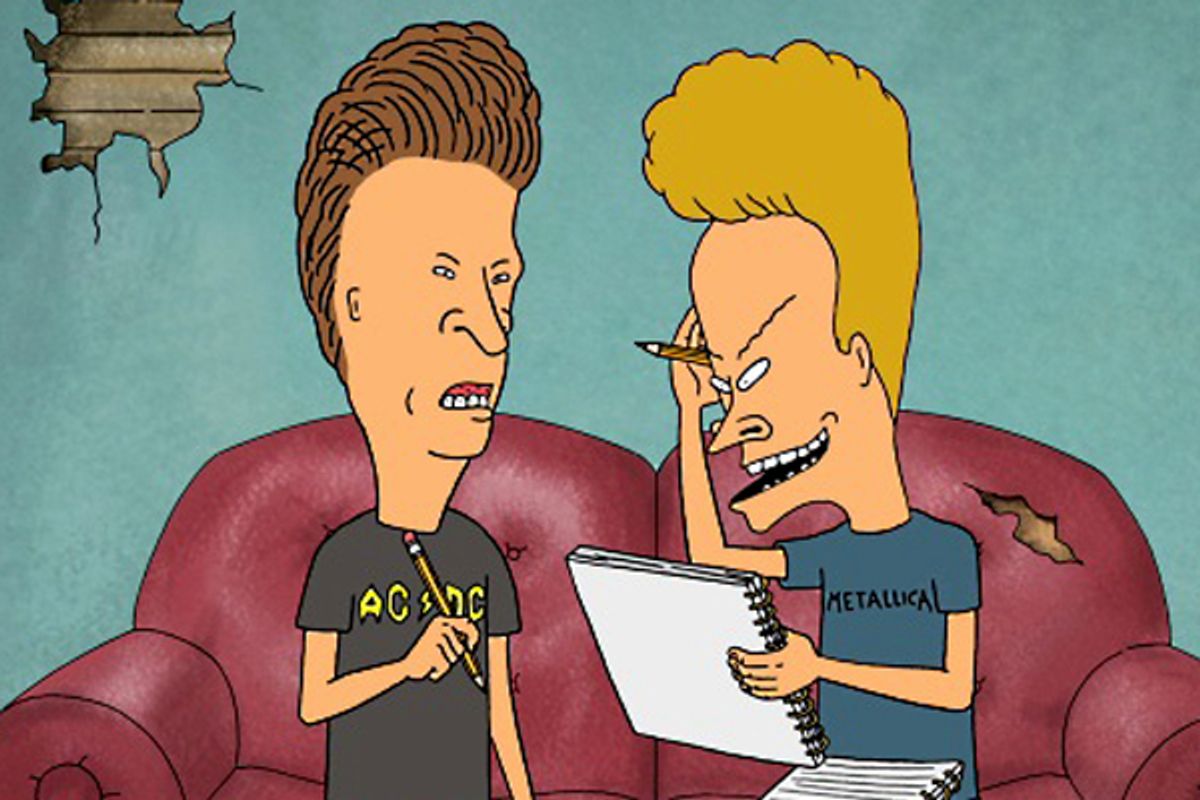 Huh-huh, huh-huh, huh-huh. Beavis and Butt-head are back. Did anyone really miss them, though? And can a resurrected version of the cartoon duo's series be anything but a bad idea?

Watching a '90s pop culture-dependent show try to revive itself after 14 years is a weird and vaguely depressing experience, like revisiting your old high school as an adult and failing to feel nostalgic. For whatever reason, creator Mike Judge decided not to age his adolescent blockheads. They're still gawky, zit-faced teens, but instead of stumbling and blithering through Clinton-era suburbia and goofing almost exclusively on '80s and early '90s music videos, they live in 2011 suburbia and make fun of the new MTV staples, "Jersey Shore" and "True Life."  (They make fun of music videos, too, but the jokes feel slightly off because they're watching them on MTV, which all but banished videos as a programming mainstay over a decade ago; for some reason it reminded me of seeing Don Rickles in concert in the late '90s and feeling sad when he joked about Frank Sinatra, Dean Martin and Sammy Davis Jr., then ended each bit with "God rest his soul.")

It's all faintly amusing, just as the original "Beavis and Butt-head" was faintly amusing. The "Twilight" riffing and vampire/werewolf/zombie talk in the first segment is probably Judge's way of acknowledging that in a sense, Beavis and Butt-head are already vampires; the world has changed, but they haven't. The payoff  -- a flash-foward to Beavis and Butt-head in a nursing home -- is pretty sweet. But it also hints at a potentially mind-blowing update that we apparently aren't going to see.  Think of how unsettling it would have been for fans to turn on the new "Beavis and Butt-head" and see the duo still sitting on that same couch in their mid-'30s, 20 pounds heavier, considerably balder and still incapable of having meaningful relationships with anyone except each other. I'm not sure whether a show like that would win a Peabody Award for its comic brilliance or get canceled after a week because it drove millions of viewers to suicide. But I'm going to dream about it anyway.