Have Wilco and Radiohead become the new adult contemporary? 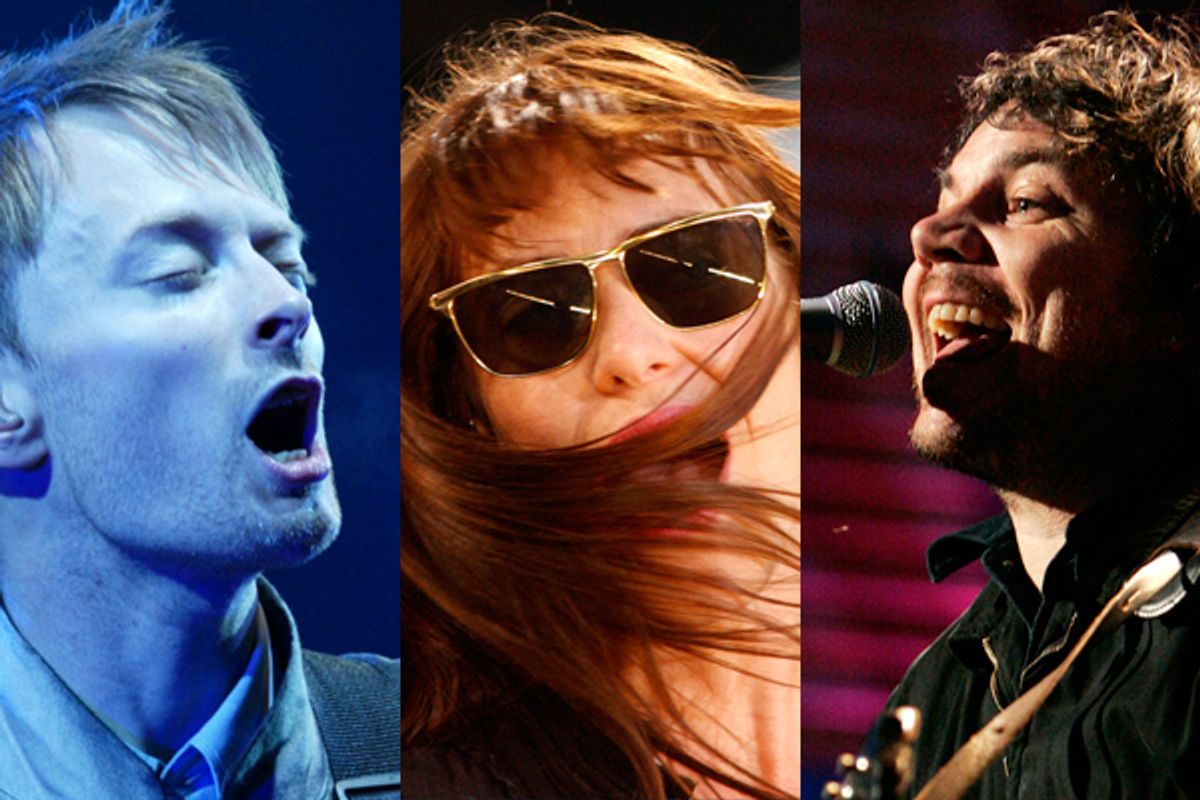 Is there a worse insult in rock music than “adult contemporary”? And is there anything worse for a fan than hearing it applied to a favorite band? For many listeners, Nitsuh Abebe’s recent essay in New York magazine will be a provocation. The esteemed critic (and a Pitchfork colleague) appends the sleepy "adult contemporary" label to several indie-rock darlings, including Wilco, Feist, Stephen Malkmus, Neko Case -- and even Radiohead, all of which Abebe essentially lumps together and calls "NPR Muzak." “If there is a consensus about what counts as respectable, adult music in 2011,” he writes, “then these acts are surely a part of it: While more people consider pop music inherently silly than enjoy it, few assaults are leveled at the seriousness or artistic value of this stuff. It’s tasteful and subtle and brings a few newish ideas to the middle of the road; it adheres to a classic sense of what rock and American music are, but approaches it from artful enough directions to not seem entirely fusty.” This is not high praise. “The main criticism you hear about this kind of record — even outweighing references to Starbucks and/or the bourgeoisie — is that it is just too dull to even bother producing any more complex indictment of it.”

Too dull even to hate: That is the essence of “adult contemporary.” What adds even more sting to the indictment is that these acts are not just reasonably successful within the low-expectations parameters of indie rock, but are well-respected and well-loved as lifers and innovators who have developed distinctive sounds and personas over the years. Indeed, Wilco and Radiohead could be considered the reigning elder statesmen of the American and U.K. underground, respectively. Abebe wonders if these older artists will spark a backlash in younger generations, much the same way the indulgences of ‘70s prog and singer-songwriter fare spurred the back-to-basics fire of punk. However, the relationship between these two generations proves much more complicated than that.

But first: Wilco, adult contemporary? Really? “Adult contemporary” originated in the early 1960s as a radio format aimed at older listeners alienated by the harsher sounds of rock and R&B. Over the decades, it has fragmented into hot AC, soft or lite AC, urban AC, and many other permutations. It’s essentially an umbrella term that has historically covered acts as diverse as Pat Boone, Roberta Flack, the Carpenters, Duncan Sheik and even such country acts as Martina McBride and Lee Ann Womack. It is the pasture to which older acts like Rod Stewart, George Michael and Cyndi Lauper are relegated, often with standards or roots albums; the only reason such artists have continued to prosper is because their audience belongs to a generation that still buys albums. In general, however, the term connotes a smooth, sometimes slick, serious and usually unobtrusive aesthetic — perfect for office visits or dinner parties.

Perhaps dinner parties have changed fundamentally over the years, because if acts like Wilco and Feist are truly “adult contemporary,” then they may be the most adventurous generation of adults in the rock era, not bound by any one genre or any one idea of how music should sound or how it should age. Abebe, again aiming for easy provocation, compares today's bands to Sting's safe, toothless solo career, somehow finding common ground between "Russians" and "Bull Black Nova."

And anyway, amid their experiments with motorik beats and fractured song structures, Wilco actually embraced the equally derogatory and silly term “dad rock” on their new album, "The Whole Love." “If you won’t set the kids on fire, well I might,” Tweedy sings on “I Might,” the first single. It’s a telling moment in the band’s catalog, a reassertion of their musical mission as well as a complicated bit of household politics. Feist’s music is never quite so self-conscious, but the understated quality of her blues-derived pop songs should not be mistaken for easy listening. Instead, her latest, "Metals," is more often clenched like a fist or braced for the next unimaginable tragedy. Perhaps the only thing she has in common with Wilco — or with Malkmus, Radiohead or Neko Case — is age. Their audiences may overlap, but the music remains distinctive, different and mostly compelling.

However, the concept of “audience” is a moving target, since groups of listeners are constantly fragmenting and subdividing against acute lines of genre and taste. The idea of “adult contemporary,” then, seems like a relic, only slightly more obsolete than rock radio itself. Even the kneejerk pejoratives Abebe associates with the market seem oddly dated: Starbucks has curtailed not only the number of stores in the United States but also the amount of music it sells, and this year NPR has streamed and discussed a wide range of albums, including punk supergroup Wild Flag, Beirut, young jangle-popsters Real Estate, Fucked Up, Hammers of Misfortune, head-bangers Giant Squid and Ohio thrashers Skeletonwitch. It’s hardly the bastion of middlebrow, good-for-you, let's-go-crazy-in-the-Volvo music, if it ever was.

To be called “adult contemporary” is to be dismissed as old, out of touch, irrelevant. Adults are the establishment — the very thing kids are meant to rebel against. Abebe admits that it’s unlikely, as “the music world is now fragmented enough that we have the luxury of ignoring things we don’t like, rather than rebelling against them.” However: “One great sign about new independent rock bands, over the past few years, has been a noticeable uptick in the number whose names are vulgar jokes, or deliberately inappropriate — in other words, mission statements that tasteful professionalism and the approval of sober-minded adults are not among their interests — and who play music that’s abrasive or adventurous enough to match.”

But unprintable names in rock music have been around longer than A--- C---, and something about that idea — of young musicians embracing abrasive noise as a response to the music of their elders — seems to be as antiquated as “adult contemporary.” It imagines a fairly conventional form of rebellion, one based on a historical model that employs aggression in response to the establishment. If an obnoxous name is real rebellion, give me Neko Case any day. If anything, this current generation’s form of rebellion is new and specific to itself, perhaps nodding to the fact that today’s adult rockers in no way resemble the adult rockers of the past. In fact, arguably the best punk band of the moment is OFF!, a Los Angeles quartet led by Keith Morris, who may be older than 50 but still flails and jumps as maniacally as he did with his former band the Circle Jerks 30 years ago.

Perhaps the latest form of rebellion in music has nothing to do with volume or tempo or band names and everything to do with style and history. Reared on the Internet, where vast archives of music are only a few clicks away, younger artists today rely heavily on the past for inspiration. Yet, few generations have been so savvy about the past as this one, and in surveying the music of previous generations, they are discovering and rehabbing sounds and styles once dismissed. And some of what they're looking to is the adult contemporary. Saxophone solos, once universally derided, are now centerpieces in songs by Lady Gaga, Katy Perry, and Foster the People. Anthony Gonzalez of the French act M83 continues to plumb the New Romanticism of the early 1980s to craft synth-pop anthems with an overwhelming melancholy, while Dan Bejar of Destroyer (who is old enough to be “adult contemporary”) reimagined ‘80s lite rock, with its flanged drums and slick keyboard sound, as an almost avant garde framework for his musings on the state of North American pop music. Both of their albums — "Hurry Up We’re Dreaming" and "Kaputt," respectively —are album of the year contenders.

In that regard, the most divisive song of the year isn’t by Fucked Up or Danish destructo-punks Iceage, who have both released excellent albums this year; nor is it by Tyler, the Creator, the California rapper whose much-discussed sick jokes sound like empty provocations. Instead, it’s by Bon Iver, whom Abebe includes among his list of "meh" and “adult contemporary” acts. The Wisconsin-born indie folk singer embraces AutoTune and even worked with Kanye West, but his most controversial act was adding a Korg M1 keyboard to “Beth/Rest,” the final track on his second album, "Bon Iver, Bon Iver." Although it adds a subtle anthemic quality to the song, the waterdrop sound of that keyboard is more closely associated with the likes of Bruce Hornsby and Steve Winwood than with indie-folk. Many listeners wrote it off as cheesy or ironic, but Vernon has repeatedly asserted his love of the instrument and the genre with which it has been linked. Along with namedropping Hornsby and covering Bonnie Raitt, that approach has established Bon Iver not as “adult contemporary,” but an act that plumbs old “adult contemporary” for new inspiration. That may be the ultimate rebellion: finding new uses for the music adults once rejected, embracing the uncool as the newly subversive.