As a volunteer medic, I\'ve watched the homeless take on a more and more crucial role 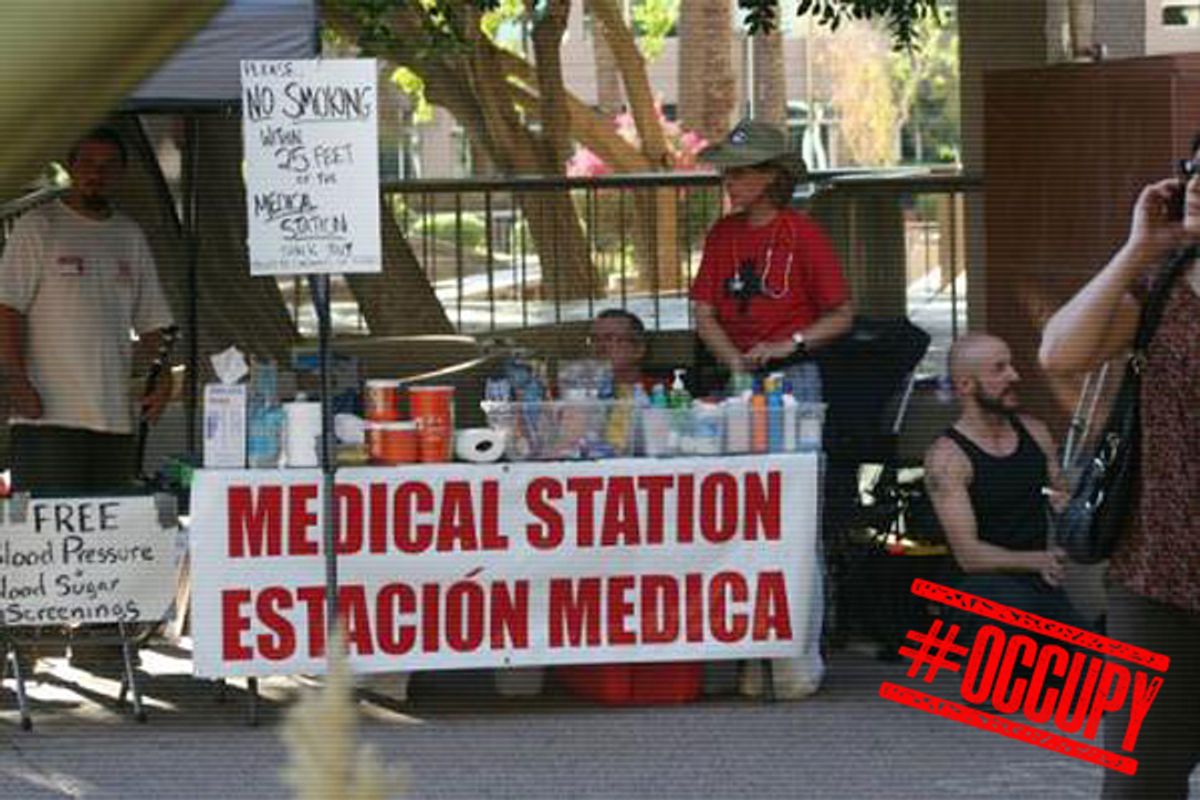 I’m standing behind my table with a bright “Medical Station” banner taped to the front of it.  On this table I’ve laid out plastic bins filled with donated vitamins, over-the-counter remedies, high energy snacks, powdered Gatorade, hand sanitizer, disposable toothbrushes and sun screen.  Behind me are plastic tote containers overflowing with bandages, medical gloves, personal hygiene items, tape and various other supplies. Someone has donated a canopy to protect us from the sun and rain and we have several folding chairs, a pair of crutches and even a wheelchair at our disposal.

A young man approaches and asks for some vitamins and Gatorade.  I give them both to him.  He asks me if there's any charge, I shake my head. He talks for a while about his life and why he is here and then moves on to wave his sign at traffic on Washington Avenue.  His sign says “I am the 99%.” This scene repeats itself several times a day.

Over the course of my long days on the plaza I’ve talked to many people. I’ve heard their stories and opinions, their hopes and dreams. I worry with them over their health issues, try to point them towards getting interventions for their high blood pressures and soaring blood sugar levels.  I harass the guy with the scary blood pressure of 191 over 125 until I extract a promise to go to the free clinic in South Phoenix.

I’ve also watched as the two thousand enthusiastic people who attended our first Saturday on October 15th have dwindled down to a few dozen during the weekdays. But paradoxically, I’ve seen the determination of our remaining few grow.

At some point I looked around and realized that while this movement started out as a broad representation of our diverse population, those who have stuck around through thick and thin are predominately homeless.

The man who is our night medic is one example. He's a medical assistant who lost his job after a dangerous and debilitating autoimmune disease made it impossible for him to work. He’s been on the street for quite a while now, waiting through the months-long process (and uncertainty) of getting his disability approved. He tells me that the homeless shelter run by the county in Phoenix is a horrible place where drugs and violence abound and only a few showers are allowed per day for over three hundred men. He is fortunate he has been able to get medical care through a free clinic near the shelter and even though it takes him an entire day of waiting in line to get his multiple medications refilled, he’s grateful since he’d be dead without them. When he heard about the Occupy Phoenix movement he and several of his homeless buddies came straight to the plaza to join in.

But many of the homeless do not get the care they need or their care is inconsistent at best.  I talked to a woman who has stepped in to man the food and water station. She borrows blood pressure pills from a homeless vet friend who can get extras through his prescription plan. She was an investment banker who lost her job and then stayed home for three years to care for her dying husband. When her husband died she’d lost her home and everything she owned and found herself out on the street.  But she has come alive since she has taken on the responsibility of feeding people. She tells me with a huge smile that this makes her realize that she loves to work and has hope she may have a job again someday.

The homelessness situation in Phoenix is dire.  According to an October 2011 report by the advocacy group Phoenix Homeless Rising, Arizona has one of the highest poverty rates in the country: 18.6 percent as of 2010. There are approximately 17,000 beds in Phoenix shelters, which is woefully inadequate for a homeless population that ranges between 20,000 to 30,000 on any given day. Heavily enforced anti-camping ordinances in the city have criminalized sleeping outdoors while strict and often punitive rules within the shelters as well as unsanitary and unsafe conditions force many out onto the streets. It’s a catch-22 designed to keep the homeless out of sight in overcrowded shelter campuses and arrest those who dare to (or are forced to) break away.

At Occupy Phoenix the anti-camping ordinances have been stringently enforced to prevent protesters from setting up tents or displaying any kind of camping gear such as sleeping bags or pillows. Sleeping is also prohibited and the police patrol relentlessly to make sure nobody nods off.  It is also not permitted to prepare food in public spaces so all food preparation must take place on private property.

On October 15th, the first day of the Occupy protest, an attempt was made to set up an encampment at the Margaret T. Hance Park in central Phoenix but this was met with riot police, pepper spray and helicopters flying overhead.  Over forty protesters peacefully held their ground and were arrested but after that night the park was abandoned.  The occupiers next selected Cesar Chavez Plaza as their base of operations, with its proximity to all the large banks and the downtown business sector. At first the city insisted on closing the plaza at 6 pm every evening, forcing the occupiers onto the narrow sidewalk but finally enough pressure was brought to keep the park open overnight.  But camping was still prohibited including lying down on the sidewalks or sleeping.

So now, in the second week of our occupation, we muddle through as best we can.  While I watch the people who have chosen to stay grow increasingly sleep deprived and fume as my helper gets roused up by the police when he nods off in one of our chairs, I do what little I can to try to keep people healthy.  I send the young people who have homes home and I steer the homeless to places where volunteers have offered to let them sleep.

But I also now realize that it is the most powerless, the most voiceless of our population who has the biggest stake in this movement. They are the ones who’ve lost the most: their homes, their livelihoods and their families.  And they must battle every day to maintain their self respect. It is only fitting that they are the ones who have stepped forward and assumed these roles in our own little corner of the Occupy movement.  And if we accomplish nothing else, the very least we can do is raise awareness about how the city of Phoenix has made their existence even more miserable.

I took today off to write this article but I'm already feeling guilty for not being down at Cesar Chavez Plaza. I'm hopeful that this movement will grow and we will bring about some real change as a result. And I'm feeling encouraged. One of my homeless medic helpers told me yesterday that a reporter asked him how long he planned to occupy Phoenix. His reply: “Hell, I’m staying here for as long as it takes.”