A first guess at 3rd quarter economic growth is encouraging. But don't get too comfortable 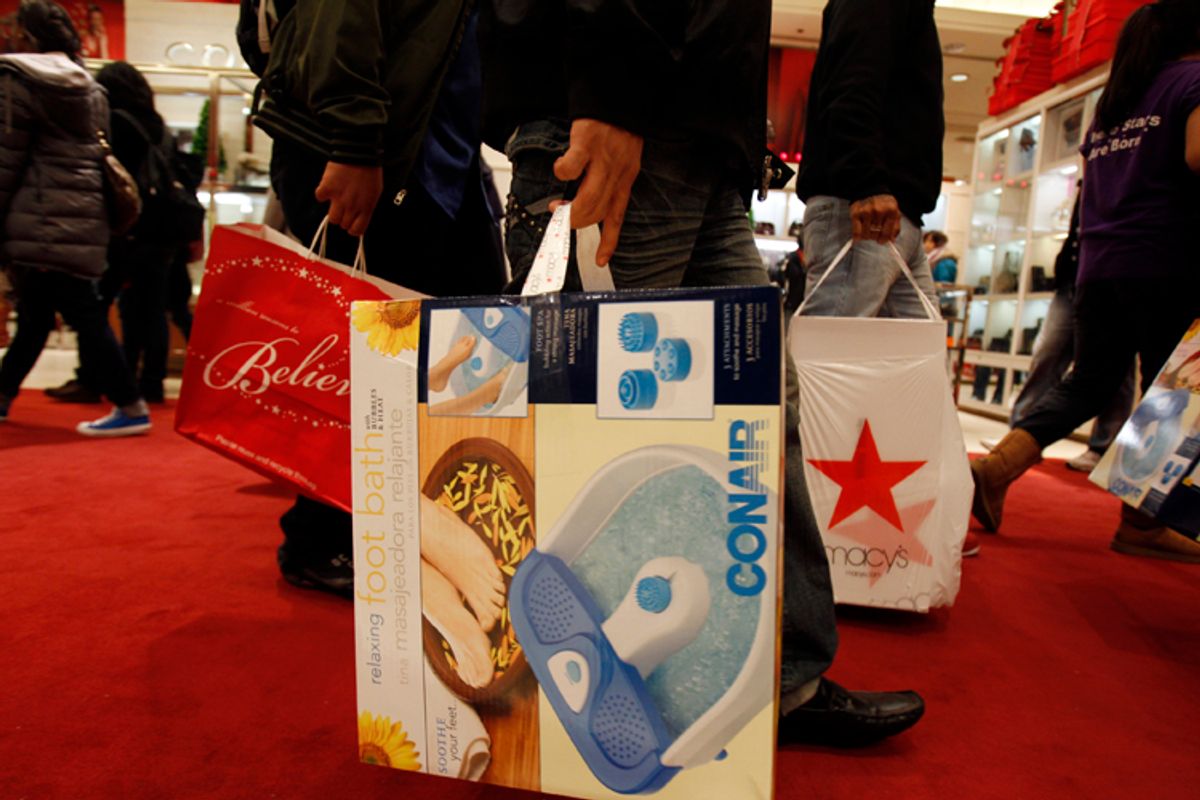 A glimpse at the top half of the home page of the Wall Street Journal at midday on Wednesday might almost have you believing that happy times are here again. "U.S. Economic Growth Accelerates," declares one headline, touting the government's release of its first guess at the third quarter GDP growth rate: a solid 2.5 percent upward tick. "Europe Forges Greek Bond Deal" piles on the celebratory glee. And in a distinct lack of coincidence, the market news is all gung-ho: "S&P in Black in 2011." Just before 2 p.m. Eastern time, the Dow Jones industrial average was up 321 points, sitting comfortably over 12,000.

So what should we make of all this? There are reasons to be suspicious of both the GDP numbers and the news from Europe, but let's be honest: Good news is a lot better than bad news. Three months ago, the nation appeared to be sliding into recession -- but now, if the GDP estimate holds up, we're looking at a very nice progression. First quarter: 0.4 percent; second quarter: 1.3 percent; third quarter: 2.5 percent. Keep accelerating at that rate and we might even reach a point where growth is fast enough to bring unemployment down. And since a European meltdown was one of the biggest threats to the entire global economy, news of progress there, no matter how tentative, is still reassuring.

But 2.5 percent growth, while better than no growth at all, is still nowhere near enough. Throughout the entire quarter, unemployment did not budge. The latest weekly jobless benefit claims fell by a tiny fraction and are still hovering at an elevated state. Much is being made of the fact that the GDP numbers indicate that the U.S. is finally producing more goods and services than it was before the recession started. But if you look at per capita GDP growth we're still behind where we were, and in any case, the current recovery is still the slowest in the last 50 years.

And whatever growth we are witnessing is still oh-so-fragile. Europe may, for the time being, have staved off disaster, but there's no guarantee at all that our own political leaders won't squelch whatever progress we've made with a self-inflicted austerity wound. State and local cutbacks are already a steady drag on growth, and further tightening at the federal level could turn mild headwinds into full-frontal gales. It won't take much at all to turn all those happy Wall Street Journal headlines into renewed harbingers of doom.

Adding to today's could-be-worse news is an advance estimate of third-quarter output growth in America. Despite some very dicey moments during August and September, the American economy grew at a 2.5 percent annual pace in the third quarter (+/- forthcoming revisions). In normal times, that would be a fairly typical quarter. Given the present output gap, it's an extremely disappointing result. Given what seemed possible a month ago, it's a relief. Recovery continues, and the hope must be that having dodged the bullets fired at it over the past few months, America's economy will pick up the pace heading into the end of the year.

Strikingly, 2.5 percent is the best quarterly performance since the third quarter of last year, and it's a significant improvement from 0.4 percent in the first quarter of this year and 1.3 percent in the second. Contributing sharply to growth were personal consumption expenditures, which sprang back from a very weak second quarter. Durable goods purchases led the way forward, growing by 4 percent, following on a quarter in which purchases actually contracted alongside high auto prices associated with the Japanese earthquake, not to mention the chilling effect on car purchases of dear petrol. Investment grew very strongly, particularly on the part of businesses. Nonresidential investment in structures rose at a 13.3 percent annual pace, and investment in equipment and software jumped upward at a 17.4 percent pace. Little sign of a chilling impact from uncertainty there. Net exports chipped in a bit, as exports growth outpaced import growth.

Inflation, meanwhile, dipped a bit from the second quarter. The Fed's favored measure of inflation -- a core measure of personal consumption expenditure inflation -- rose 2.1 percent for the quarter, down a tad from a 2.3 percent reading in the second quarter.
The story of the recovery remains mostly unchanged. Relative to previous recoveries, growth has been quite slow; the economy is struggling to maintain trend growth and making essentially no progress closing the output gap. Unsurprisingly, unemployment has not fallen by very much. The hope must be that having survived a difficult summer, firms and households will begin to regain their confidence, and that policymakers will do more to support growth and less to court disaster.