Why all of West Virginia now hates Mitch McConnell 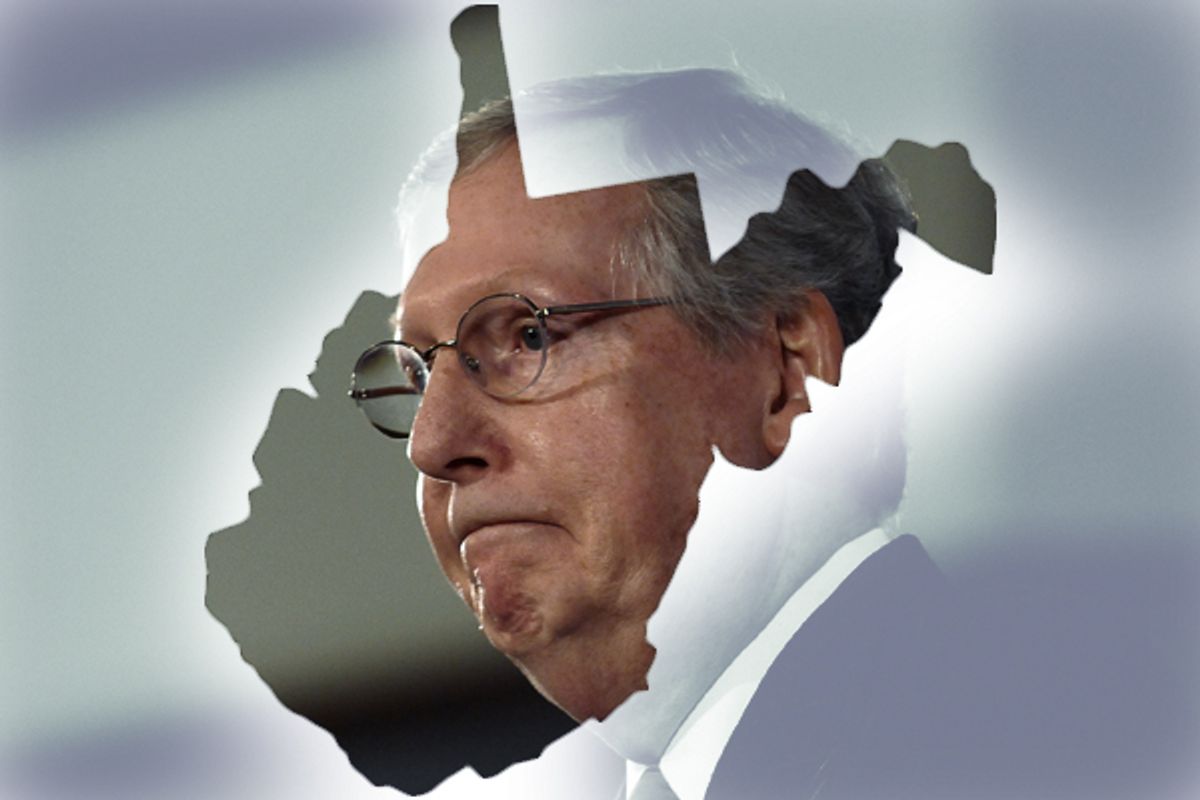 If you follow college athletics, you're probably familiar with the conference realignment chaos now playing out, which is set to make big winners of some schools -- while inflicting grievous and possibly permanent damage on others. If you don't, then you probably don't care much about the minutia of the whole saga, and it's too dense to convey here anyway. For the purposes of this post, this is what's important to know:

Yes, that would be Senator Mitch McConnell, the Republican leader of the U.S. Senate, and as odd as it may seem, he's emerged as a key player in a college sports drama. The reason: McConnell is a Louisville man. He grew up in the city, attended the University of Louisville, and remains a rabid fan of its sports teams. And the Louisville Cardinals are in the same position as the West Virginia Mountaineers: They are members of the dying Big East and they're desperately angling for a lifeline from the Big 12. So when word broke Tuesday afternoon of West Virginia's impending invitation to join the league, this happened:

But everything changed Tuesday evening, as the Big 12 backed off its assurances to West Virginia. Hard lobbying from another candidate from the Big East, Louisville, has created a heated race for the remaining slot in the Big 12 that Missouri is expected to vacate soon. (Missouri is still headed to the Southeastern Conference after it sorts through its exit issues with the Big 12.)

A person with direct knowledge of the situation said it was “too close to call” between West Virginia and Louisville.

Two other people with direct knowledge said that the lobbying of the Senate minority leader, Mitch McConnell, Republican of Kentucky, had helped Louisville. His communication with Oklahoma’s president, David Boren, a former senator, and Texas Tech’s chancellor, Kent Hance, a former congressman, played a role in raising Louisville’s fortunes. Hance confirmed that McConnell called him to push Louisville.

And just like that, West Virginia's seemingly imminent move to a safe conference home is on indefinite hold, and the future of the school's football team -- and the foundation of its entire athletic program -- is in peril. Needless to say, this has enraged McConnell's Senate colleagues from West Virginia. Democrat Jay Rockefeller termed McConnell's apparent intervention "just flat wrong. I am doing and will do whatever it takes to get us back to the merits," while Joe Manchin one-upped him by suggesting an investigation.

In reality, of course, McConnell is only the latest politician to throw his weight around to protect and promote a college athletic program that matters to him personally (and to many of his constituents).

There's the old story of Ann Richards, Baylor '55, who used her gubernatorial clout in 1994 to force the University of Texas and Texas A&M to take her beloved Bears with them as they moved to the mighty Big-12. Texas Tech was included in that package too, mainly because of the clout of its alumni in the Texas legislature. This move killed the old Southwest Conference, leaving the rest of its members -- Rice, Houston, Texas Christian and Southern Methodist -- to suffer in lower-tier athletic anonymity. Fans of those schools still lament the '94 deal.

More recently, Mark Warner used his power as Virginia's governor in 2003 to pressure the Atlantic Coast Conference into revoking an invitation it had already extended to Syracuse University. Warner wanted the conference, which already included the University of Virginia, to add Virginia Tech instead -- and he got his way. Syracuse's athletic director later explained how it went down: "Yes, it was the governor of Virginia exerting a certain influence on the ACC on behalf of Virginia Tech, saying again they would pull Virginia out of the ACC if Virginia Tech wasn't invited."

There are even indications that Rockefeller and Manchin have been working behind the scenes to muscle West Virginia into the Big 12 now. It just seems that, for whatever reason, McConnell has more pull -- at least for the moment. Still, if his Louisville team ends up playing at Mountaineer Field again in the future, McConnell would probably be wise to stay home and watch it on television.