TV that deserves the name "journalism" 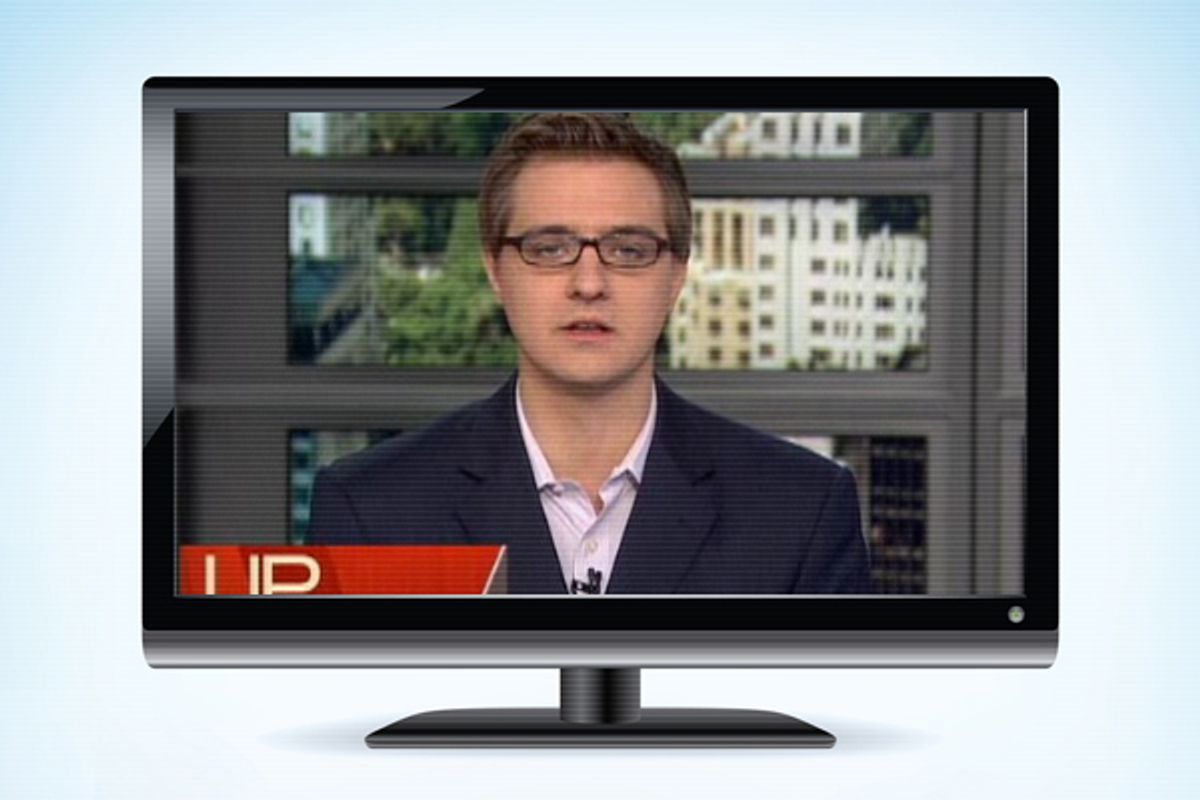 Waking up at 4 a.m. is rarely enjoyable, and arising at that unspeakable hour to appear on a cable news show is particularly painful. In such situations, you feel as if you’re dragging yourself out of bed only to be treated like a canine in a dogfight, with the typical show pitting you in a contrived death match against another guest who is your equally angry, equally mangy opposite. That, or you’re simply asked to play the yes-man -- the Ed McMahon to the host's Johnny Carson.

Needless to say, I'm not a fan of most cable news because I find this format mind-numbing, uninformative and tedious (and cable news' declining ratings over the last year prove I'm not alone). So when I was asked to appear on MSNBC last Saturday morning, my initial thought was, "Thanks, but no thanks."

But then I realized it was a new show hosted by Chris Hayes, a journalist whose work I've long admired. So I said yes. And crack-of-dawn fatigue aside, I'm glad I did, because to my surprise, I ended up getting the chance to participate in one of the best television programs on the air.

"Up With Chris Hayes," which broadcasts Saturday and Sunday mornings, purposely rejects the manufactured red-versus-blue mallet that bludgeons every issue into partisan terms. Instead, the program's host is creating a space for more expansive discussions with voices typically deemed too unconventional, provocative or dangerous to be allowed anywhere near a television set.

The panel I appeared on exemplified Hayes' effort. Out of five in-studio guests appearing to discuss the death of Moammar Gadhafi, the Iraq war and the Arab Spring, one was Iraqi author Zainab Salbi, one was Libyan author Hisham Matar and one was Palestinian-American comedian Dean Obeidallah. (Arabs being asked for their opinion on events in the Arab world -- what a concept!) Amazingly (and refreshingly), in a cable world dominated by crotchety Caucasians, NBC News' foreign correspondent Richard Engel and I were the only white dudes on the panel.

Even more incredible was the show's ideological openness. Just one example: We had a discussion about the notion of America as an empire -- a concept pervasive throughout the globe that Engel nonetheless couldn't believe was being discussed on American television. He was right to be surprised. Though it should be standard, a cable program that both explores hugely taboo questions and includes a diverse set of voices is something you rarely see in this country.

For American news consumers, Hayes' show is a terrific, better-late-than-never development. But the fact that "Up" is groundbreaking is also something of a sad commentary on the larger media.

For the most part, TV remains exactly as Hunter S. Thompson once described it: a "cruel and shallow money trench through the heart of the journalism industry, a long plastic hallway where thieves and pimps run free …" In that hallway's current cable form, "national news" is a euphemism for New York- and D.C.-focused content engineered primarily by a closed ecosystem of East Coast elites who believe the only things that matter are Manhattan gossip and Beltway games. This is why you almost always see the same vapid pundits and the same homogenized topics on TV -- because this clique is hostile to diverse viewpoints and uses its privilege to make sure media debates represent only the elites' myopic perspective.

By contrast, Hayes' show joins a variety of programs, from Amy Goodman's "Democracy Now!" to Jon Stewart's "The Daily Show" to Thom Hartmann's "The Big Picture," in rejecting this suffocating model. If it succeeds, it will play a huge role in creating a new model that will serve journalism and the citizenry far better than today's vast television wasteland.