"Grimm": A sly, modern spin on the fairy tale

The new NBC series stylishly updates a classic form. ABC\'s \"Once Upon a Time,\" not so much 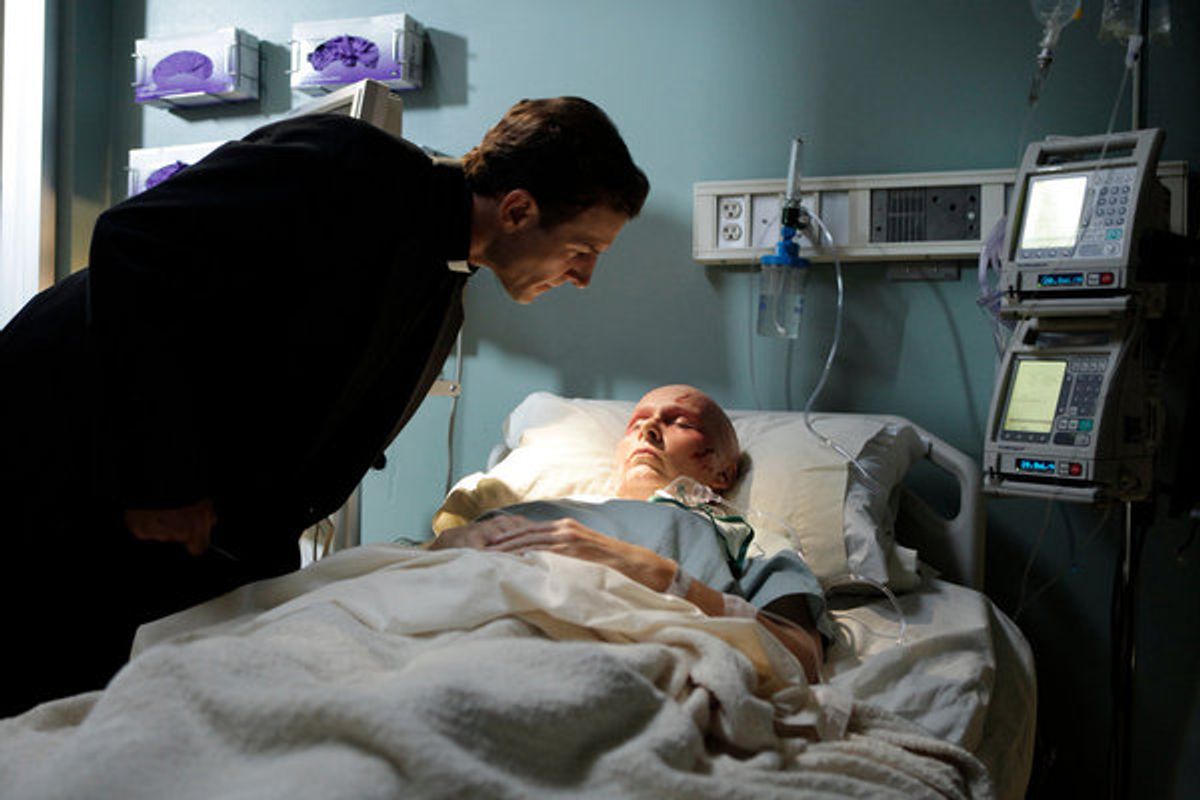 Everybody knows the modern world lacks enchantment. As a premise, that assertion is unprovable, but movies and TV shows have been saying it forever, so we just accept it as a trope, like, "The suburbs are shallow" and "When the railroads came, the Wild West became civilized." Any program built around it is therefore better off not dwelling on it, and focusing its energies instead on other, more basic pleasures: characterization, plot, atmosphere. Two new network shows are built around fairy tales and the absence of magic in modern life -- ABC's "Once Upon a Time," which debuted Sunday at 8 p.m. and repeats this Sunday at the same time; and NBC's "Grimm," which debuts tonight at 9 p.m./8 Central. The first is officially one of the season's only new hits, but I thought it was awful: poorly written and directed and woodenly acted, except for Scottish actor Robert Carlyle's performance as Rumpelstiltskin); you can can check it out Sunday and see for yourself, but I wouldn't recommend it, unless you're the type of person who hears somebody say, "This milk is sour"  and says, "Here, let me taste it." NBC's "Grimm" is much better -- not a great show right out of the box, but much more confident and stylish, more sure of what it wants to say and how it wants to say it.

The pilot of "Once Upon a Time" has a back-and-forth structure, alternating scenes set in a sort of omnibus fairy-tale world with ones set in the enchantment-free present, where such fairy-tale characters as Snow White (Ginnifer Goodwin) and Prince Charming (Josh Dallas) battle the evil machinations of the Evil Queen (Lana Parilla) against a backdrop of spacious but sterile apartments and homes and wide, paved streets. There's a complex, unfolding mythology that extends to both worlds: the evil queen put a curse on Snow White and Prince Charming's marriage, declaring that they'll all be banished to a place with no magic and no happy endings. (I love that the queen threatens to send the good guys to "someplace horrible," and the first "real world" scene that we see is set in Boston; the city's film and TV commission must love that.) But there's hope for the good guys in the form of a present-day savior story. The child that Snow White and the Prince sent to our world has grown up to become a bail bondswoman named Emma Swan (Jennifer Morrison, exuding no personality whatsoever, unfortunately), and she herself has a son named Henry (Jared Gilmore) whom she gave up for adoption and is essentially Pinocchio. The boy who tries to reawaken Emma's buried, secret, magical self and restore ... well, I almost typed "balance to the Force," sorry. Wrong modern fairy tale, same gist.

There are, as it turns out, other amenities in the non-magical universe, such as cellphones and electricity, and some vestigial fairy-tale elements, including a child therapist named Archie (Raphael Sbarg) who is secretly Jiminy Cricket; but for the most part things are, well, pretty grim, with one "m." I think "Once Upon a Time" is supposed to be straightforward, unironic and innocent, even naive, but what's on-screen plays like "The Princess Bride" without the laughs. The fairy-tale characters and themes are conceived in the most boringly literal way imaginable, and the roles are all cast with people who are either very bland or have been commanded to give bland performances. Goodwin, who was a ray of sunshine on "Big Love," seems drained of energy here; both her Snow White and her real-world alter ego, a schoolteacher, are undistinguished. And as the wicked queen -- who in our world is the mayor of Storybrooke, Maine, is a pretty listless and not-scary bad guy -- Parilla just seems like a privileged rhymes-with-witch who wandered over from the set of "Revenge." If it weren't for the magnificent Robert Carlyle -- sneering and leering even as his "modern" incarnation, Mr. Gold -- the show would have no energy at all.

There is no filmmaking excitement in the pilot, save for a mildly amusing moment where Emma goes to visit the mayor -- Henry's adoptive mother, or Wicked Stepmother -- in her home, and she offers the bail bondswoman a cup of cider; as Emma settles into the mayor's living room couch to drink it, the camera follows her hand as she sets a glass down on a tabletop, revealing a big bowl of apples. Aside from that, snoozeville. The series looks like half the cellphone ads on television and is shown in that undistinguished multi-camera style that unfortunately has become the norm on network dramas. Even the "fairy tale" scenes betray no hint of filmmaking imagination. The series is created by Edward Kitsis and Adam Horowitz, who used to work on ABC's "Lost," and is plainly aiming for the same sort of sincerity and narrative density, but unless a collection of thinly conceived fairy-tale references and warmed-over Joseph Campbell references make your heart leap, there's not much worth sticking around for.

NBC's "Grimm" is a huge step up in comparison -- not that it had to work hard to earn that distinction, granted, but from the opening seconds of tonight's pilot -- a college student in a red sweat shirt jogging through verdant woods to the tune of the Eurythmics' "Sweet Dreams" -- it pulled me in and never relinquished its grip. Created by Stephen Carpenter, Jim Kouf and David Greenwalt (a veteran of "Buffy the Vampire Slayer" and "Angel," both of which this show strongly resembles), "Grimm" doesn't beat itself up trying to establish a one-to-one correspondence between a fairy-tale world and a "real" one. In fact, the fairy-tale stuff isn't really very prominent; it's used more for subtext, flavor and sly jokes.

The hero, Portland police detective Nick Burkhart (David Guintoli), is yet another Chosen One -- a slayer of supernatural bad guys known as Grimms who is awakened to his purpose by a string of horrible murders of local women in red, and by prompting from his dying Aunt Marie (guest star Kate Burton). Aunt Marie is a mentor figure and exposition machine who has a silver trailer that's filled with ... well I was about to start detailing the show's master plot, but it's probably better if I try to write around it instead. "Grimm" is a fiercely event-driven show, laying out each new bit of relevant information with the precision and snap of a master gambler laying cards on a table. Most of the revelations won't come as a shock to anyone who watched "Buffy," "Angel" or the somewhat similar "Charmed" (which, like this series, had a savior-vs.-demons mythology, and a Necronomicon-like book at its center), but the pleasure of this tale definitely lies in the telling. Guintoli is a regrettably bland hero -- I realize they were probably going for an "Everyman" type, but he's just too daytime soap-opera wooden for my taste. But the rest of the cast is just about right; I was especially fond of Burton's Aunt Marie, who has the laid-back vigor of a frontier plainswoman in an old western, and Silas Weir Mitchell as Monroe, the hero's guide, who is secretly a ... whoops, almost gave something away there; it's so tempting! ("Once Upon a Time" has a magic book, too, and both shows prominently feature a yellow Volkswagen Beetle that faintly suggests a pumpkin coach.)

More than anything else, though, "Grimm" is a welcome excursion into pure style. Although it conspicuously lacks the feature film-quality sets, costumes and special effects of "Once Upon a Time," it's a much better directed and designed series -- a show that conjures a world with a thick, at times overwhelming atmosphere unlike anything on TV right now. Some of its effectiveness comes from the filmmaking, which is unusually tight for a big network series. I love how it uses opening and closing doors and room partitions to separate scenes, and moments within scenes. Watching it is a bit like examining the segmented rooms of a dollhouse from very close-up; there's a diorama-like clarity to some of the shots, especially a terrifying image of a kidnapped little girl bound on a bed in a Grimm's basement room, the dim, brown-orange light cut by shafts of sun streaming down through the opened trapdoor in the ceiling. And I love the overwhelming greenness of the series -- the way that every part of city seems to be on the verge of getting swallowed up by nature. The preponderance of waving ferns and moss-encrusted roots and bony-fingered trees and ivy-thatched rooftops suggests "fairy tale" more effectively than anything in "Once Upon a Time." It also makes the whole show feel like one of those dreams that feels very real until your dreaming mind realizes that something is a bit off. More, please.