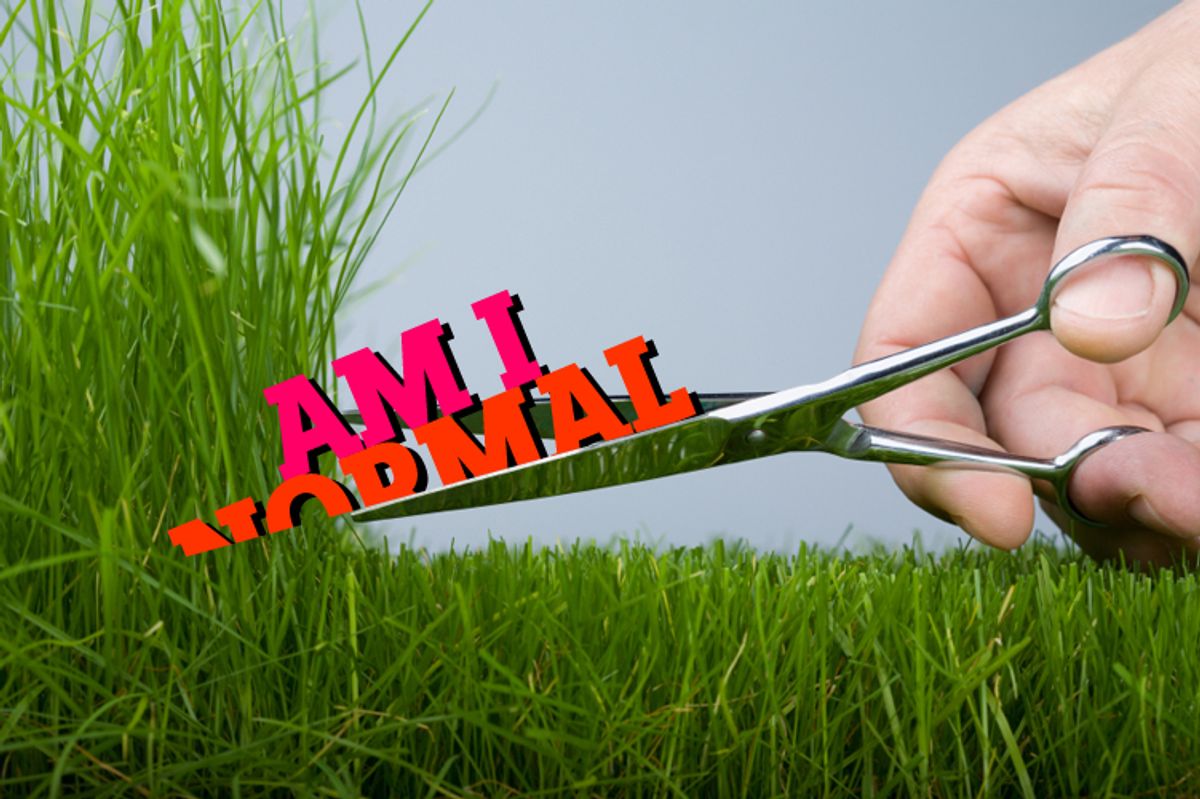 Hairless is the norm with women? Au contraire, sir. Last year a study out of the Kinsey Institute found that there is "no one dominant pubic hair style" among women. Young ladies are far more likely to have experimented with different degrees of deforestation but most women have "at least some pubic hair on the genitals." Given the regrowth rate, the researchers amusingly concluded that "pubic hair 'style' may be a malleable concept" (for some reason, this just conjures in my mind an image of a merkin Mohawk). But I digress. You're interested in male pubic hair – in an intellectual, socio-cultural sense, of course – so, let's move along.

Personally, I was ready to declare that male waxing had jumped the shark when Christopher Hitchens wrote in 2007 about getting a Brazilian in Vanity Fair. But the trend stories about this growing demand persist. A "growing demand," however, does not mean this is something most "guys are actually doing now" -- just that more guys are doing it than before. In general it's easy to see evidence of the rise of "metrosexual" upkeep: Beauty salons are increasingly offering all kinds of services to men, and some just-for-men operations have popped up. There's also a growing market for "manscaping" products – for everything from back shaving to chest waxing (which I have passionately protested). Classic men's brands have begun aggressively marketing body shavers -- Phillips, for example, launched the website ShaveEverywhere.com, which features a game in which you guide an avatar by the name of "Willy" through a jungle -- subtle, eh? On the flip side, traditionally female brands like Nair and Veet have developed lines spec...

This is all anecdotal, though, and, not too surprisingly, little reliable research has been done on the topic. However, a 2008 study out of Australia compared hair removal between straight and gay men. The latter are more likely to have removed body hair – everywhere from their chest to their rear – but "the majority of men, both gay and heterosexual, do or have engaged in removal of their body and pubic hair," the survey found, and most preferred shaving to other techniques. The researchers reported that 82 percent of gay men and 66 percent of straight men had removed their pubic hair at least once, although the largest percentage of both groups said they did it "rarely." Note, though, that the study didn't distinguish between partial and total removal, so there is a lot of room for interpretation. The most popular reasons given for pubic deforestation: "Sexual reasons" and "enlargement of the appearance of their genitals." (Interestingly, women are more likely to cite "hygiene" concerns to explain their own hair removal.)

You aren't alone in being squicked out by hairless willies – and not just among your male comrades in depilatory resistance. When Salon's Rebecca Traister polled women in 2004 about their thoughts on the matter, she found that a man of wax, at least in this meaning, is often enough considered a turn-off. One woman told her, "Waxing is emasculating and effete in a way I just can’t find sexually attractive, but I could get used to hairiness even if it’s not my preference." More recently, an instructional video from Gillette on "groin" shaving inspired a PSA from comedian Brooke Van Poppelan matter-of-factly titled, "Please Don't Shave Your Balls." On the other hand, when Jed Lipinski wrote for Salon about his personal bro-zillian experiment, he was told by professionals that men often ended up on the table as a result of pleas from their girlfriends and wives. (Of course, promoting it as a sexually desirable routine is very good for business.)

It's worth noting that some researchers have speculated that pubic hair can serve an actual purpose, from collecting pheromones to serving as "a protective pad" during sex -- the last of those doesn't sound very sexy, but keep in mind that when one depilated nether region meets another, there can be some rather unpleasant friction. Also, stubbly regrowth is bad enough on its own, let alone when it meets another prickly patch -- yee-ouch.

I think the takeaway here is that -- dude! -- you're totally normal. But, more important, remember that when it comes to pubes, as with most things, "normal" is "malleable."

All Salon Am I Normal? Love And Sex Salon Premium Sex Sex & Love