When student is an occupation

Caught in an economic quagmire, the educated class turns to OWS 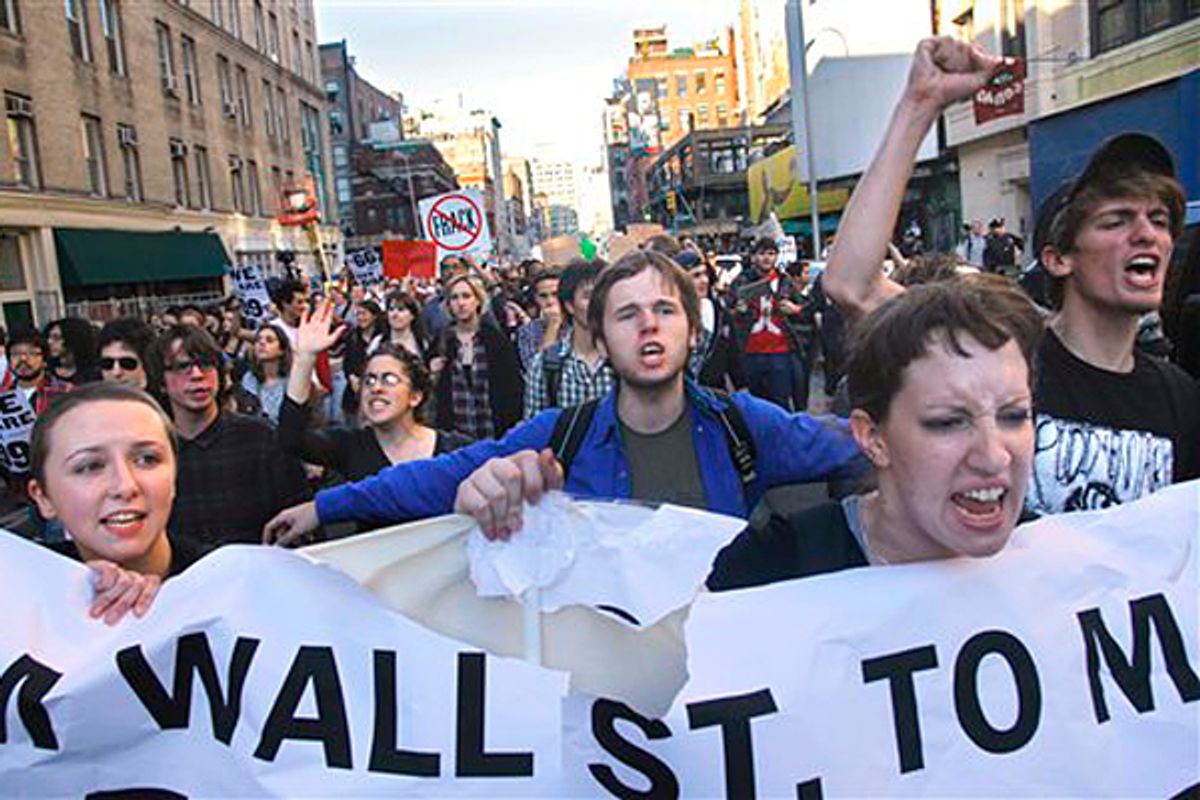 In the months leading up to the invasion of Iraq my senior year of high school, my friends and I briefly thought the outrage we shared with thousands of Americans would coalesce into something like “our Vietnam.” Instead, we marched in the streets once or twice and then went home to worry about college admissions. Far from signifying a position on the front lines of national upheaval, studenthood in the post-9/11 era meant crawling deeper into one’s individual cocoon of privilege. Or so we thought.

Eight years later, my friends and I, now college graduates possessed of varying amounts of despair and health insurance, are marching in the streets again, together with people of every age and educational background. But this time there is no getting around the fact that we have our own grievances to voice. With astonishing speed, the Occupy Wall Street movement has begun to catalyze a consciousness among students and college-educated youth that we are a class with a legitimate self-interest in agitating for change.

But the movement is also inviting us to begin what will surely be a longer, quieter process of reconsidering what it meant to go home early from those protests nearly a decade ago. Back then, we were told that childhoods full of hard work -- including a kind of lifelong resume-building that bore little resemblance to education in any familiar sense of the word -- made us privileged. That would have been true if, a decade or two later, we had received the opportunities implicitly promised as compensation. But we never got paid. We weren’t crawling back into cocoons after all. We were being conscripted into an economic quagmire.

We should have known this long before student debt prepared to hit the trillion-dollar mark, youth unemployment fell to levels unseen since the Bureau of Labor Statistics began keeping track in 1948, and the latest round of political gamesmanship over easing the college loan burden began. Prospects for recent graduates are declining, fast. Members of the class of 2011 graduated with an average of $22,900 in student debt, 47 percent more, in numbers adjusted for inflation, than a decade ago. A mere 56 percent of 2010 graduates was employed at some point during their first post-college year; those who did find work received a median starting salary of $27,000, 10 percent less than their peers who graduated two years earlier.

But according to a perversely backward logic that has spanned the American political spectrum for too long, students must be a privileged caste precisely because exorbitant charges are foisted upon them. This makes no more sense than imagining that subprime mortgage holders or sick people without insurance must be wealthy because they have such large bills. Nonetheless, the pervasive American suspicion that higher education is a luxury good has planted it deep in our discourse.

The dismissal of students as “elites” without real problems has been spewed by the populist right, which has unsurprisingly summed up Occupy Wall Street as a vacation for “spoiled brats.” But it is also embedded in leftist campus discussion hobbled by the notion that privilege is a kind of static good that college students and graduates possess in spades. What this identity-based understanding of privilege obscures is the fact that your social position can change without consulting you first. Being a middle-class college student or recent graduate simply does not confer the same privilege in a recession as it does during boom times.

Insinuations that to be young, educated and politically fired up is to be a dilettante or a patronizing do-gooder has long paralyzed student and youth activism, and the nagging fear that failure to launch after college means an individual squandering of one’s class status is positively poisonous. New York magazine reported last week on out-of-work young people like Sam, a star student now worried about becoming homeless who “blames himself for his predicament, not the economy.”

Yet the young writer who collected such wracking stories remains steadfast in the idea that we suffer from “self-esteem surpluses” bequeathed by our coddling parents. A rising generation with real self-esteem surpluses -- indeed, a familiar one that came of age when American prosperity was spread around by a still-intact New Deal -- responds to crisis by deciding not to trust anyone over 30, not sending itself to bed without supper. Our apparent excess of self-worth was purely speculative, contingent on the returns of our collective investment in an unattainable, unaffordable model of success. Then the bubble popped.

Occupy Wall Street’s evocation of “the 99 percent” revitalizes with the reminder that privilege is relative, and that social position is contingent. For young people of real but modest and fluctuating privilege to see themselves among the victims of regressive economic policies and among the potential beneficiaries of social change could not only create both that elusive electricity missing during the Iraq War protests. It could also enable alliances across lines of identity—most notably, thus far, between students and labor. It could reshape progressive politics for a generation.

One of the most frequent dismissals of the movement is that it won’t succeed at engendering fundamental economic reforms. That is likely the case, but I’m not sure it’s the point. By that standard, the student antiwar movement of the 1960s was meaningless because it failed to change U.S. policy in Vietnam. But if anything, that failure is the part of the story history has forgotten. What we remember it changing, from civil rights to popular culture,  was everything.