Can Lou Reed and Metallica's collaboration be that bad?

The icons collaborate on an album both uncompromising and unlistenable. Is it awful or a misunderstood masterpiece? 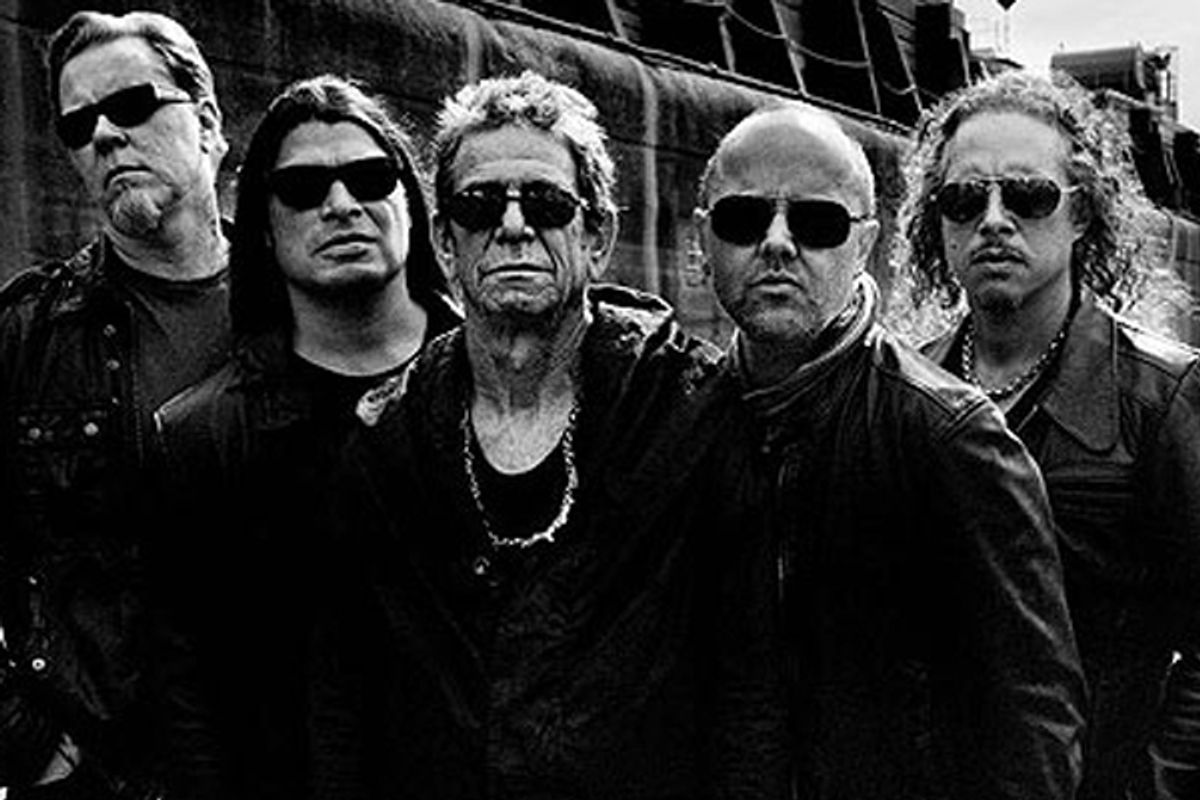 If you’ve read anything at all about "Lulu" — the assaultive 10-song, 89-minute album by Lou Reed and Metallica that will officially be let loose on the listening public this Tuesday — it almost certainly concerns how horrendous it’s supposed to be. Media coverage centered on the record’s presumed awfulness almost immediately after the collaboration was announced in June, months before people actually got the chance to hear it. On music websites, message boards and Twitter, "Lulu" inspired a series of seemingly unanswerable questions: “Lou Reed and Metallica? For real? Huh? Seriously? Why?”

The defining figure of New York rock and the most successful metal band of all-time braced the world for "Lulu" in 2009, when they performed together at Madison Square Garden for the Roll and Roll Hall Of Fame’s 25th anniversary concerts. But many still found the pairing not only wrong, but a hubristic miscalculation of potentially historical proportions.

Once "Lulu" leaked online a few weeks ago, critics tripped over themselves to confirm that, sweet Jesus, it truly was as bad as expected, if not more. The early reviews have suggested that its horribleness is so vast and wide that it speaks to something bigger about the artists involved -- and even the culture at large. British music website the Quietus called "Lulu" “the worst thing any of the players have been involved in” and “quite possibly a candidate for one of the worst albums ever made.” Jim DeRogatis of the syndicated radio show "Sound Opinions" gave it zero stars, due to it being "horribly, massively, almost inconceivably wrong." Writing on Grantland.com, Chuck Klosterman condemned "Lulu" in the broadest terms, saying its existence is among “the real-life consequences of a culture in which recorded music no longer has monetary value.” This album isn’t just a debacle — it’s been taken as a sign that a popular art form is now literally worthless.

The complete and utter crappiness of "Lulu" has been so built up to such an overwhelming and powerfully putrid level that the record itself can no longer live up to it. It is now the worst kind of disappointment: It can’t even get being transcendently terrible right. Not that most people will be bothered to actually listen to this ragingly unpleasant thing for any longer than 30 seconds; critics only listened to "Lulu" because they were paid to do it, and because they’d be nuts to miss out on the chance to write hilariously mean things about the easy target of a lifetime. But in case you’re curious: "Lulu" is not the worst album ever made, nor is it among the worst albums ever made, nor is it even the worst record ever made by Lou Reed or Metallica. Have we all forgotten about "Metal Machine Music," Lou Reed’s interminable 64-minute belch of sped-up and slowed-down feedback released as a double album in 1975? Well, "Lulu" sounds like ABBA compared to that record. "Lulu" does have small fragments of melody, which are then ground up into specks of brain-freezing nothingness by the repetition of endlessly long and pile-driving tracks; "Metal Machine Music" has no melody at all. If "Lulu" is unlistenable, then "Metal Machine Music" actively tries to make you give up on listening altogether.

Then there’s Metallica’s 2003 album "St. Anger," a record I’ve never managed to listen to all the way through (not for free anyway), but based on what I’ve heard is in the same ballpark of obnoxiousness as "Lulu." And, as far as we know, the creation of "Lulu" hasn’t driven Metallica to group therapy, so it has that on "St. Anger," at least.

The truth is that "Lulu" is a run-of-the-mill bad record. It’s not unholy and offensive; it is merely half-baked and pretentious, the result of a frenetic 10-day recording session where the principals apparently assembled songs very much on the fly, without much (or any) pre-planning or self-editing. When Reed first approached Metallica about making an album together, the plan was to redo a bunch of Reed classics with a Metallica makeover, similar to the Rock and Roll Hall of Fame performances. But shortly before they convened in the studio, Reed switched things up, and sent over 10 songs' worth of lyrics based on two plays, "Erdgeist" (Earth Spirit) and "Die Büchse der Pandora" (Pandora's Box), by influential and controversial early 20thcentury German expressionist playwright Frank Wedekind. “Lou walked into the studio and about seven seconds later my head was spinning like Linda Blair in 'The Exorcist,'” Metallica’s Lars Ulrich recently told the Guardian, describing the process of making "Lulu" as “so impulsive it'll take me years to access what happened."

The impulsiveness that drove "Lulu" is palpable when listening to the record. The songs sound like unfinished demos, carrying on for minutes on end in search of a through-line, mostly to no avail. Some songs, like the 11-minute “Cheat On Me,” drag on for so long that it’s possible to enjoy one three-minute stretch, hate the next six minutes, and then come back to appreciating the final minute or two. The relatively concise “Iced Honey” has traces of a radio-friendly hook that might’ve sounded OK in strip clubs had it been shaped a little more. The playing on "Lulu" is vigorous and even exciting at times — see the furiously tornadic riff of ‘Mistress Dread,” and Ulrich’s smash-anything-that-moves drumming on “Frustration” — but it’s too formless to make sense as rock music. As for Reed’s vocals, I’ll spare you the schizophrenic senior-citizen comparisons, because others have already made them with far more wit than I ever could. But for all his circular bouts of stark, raving lyrical lunacy on "Lulu," Reed does manage to haphazardly hit the mark every now and then with a catchy snippet of stream-of-consciousness gobbledygook. (My favorite line, from “Pumping Blood”: “If I waggle my ass like a dog prostitute, you think less of me?” Like you really care, Lou.)

The closest "Lulu" comes to coalescing into something resembling coherence is the nearly 20-minute closer “Junior Dad,” a glacial reimagining of "White Light/White Heat"-era Velvet Underground through the lens of Ride the Lightning’s most gorgeously epic passages. It’s still a little too undercooked to come off as powerfully as it could have, but “Junior Dad” has a disarming vulnerability that stands out amid the ugly slobbering that precedes it. The song could potentially become an awe-inspiring live number for either Reed or Metallica (or both, if they follow through on the threatened tour).

For all its shortcomings (and scattered, minor triumphs), "Lulu" really is only a lark, nothing more. To call it a disaster — or, if you’re feeling contrarian, a courageous act — is giving it way too much credit. In the end this album won’t matter. It doesn’t diminish Reed’s stature in rock history, which was already firmly in place by the second Velvet Underground record, nor will it prevent Metallica from selling out arenas the next time they go out on tour. Fans will hate it, but they’ll also set it aside without much consideration.

Like so many millions of tweets and Tumblr posts, all the scathingly critical things written about "Lulu" will be forgotten, too. If this record tells us anything about our culture, it’s something we already know but still sometimes like to forget when we’re gossiping online: Internet conversations are inherently transient and constantly hungry for something to love like it’s the best that ever was, or revile like nothing has been reviled before. "Lulu" filled that need, but only for a while. Which means this is not an all-time boondoggle; it is "Internet Troll: The Album."