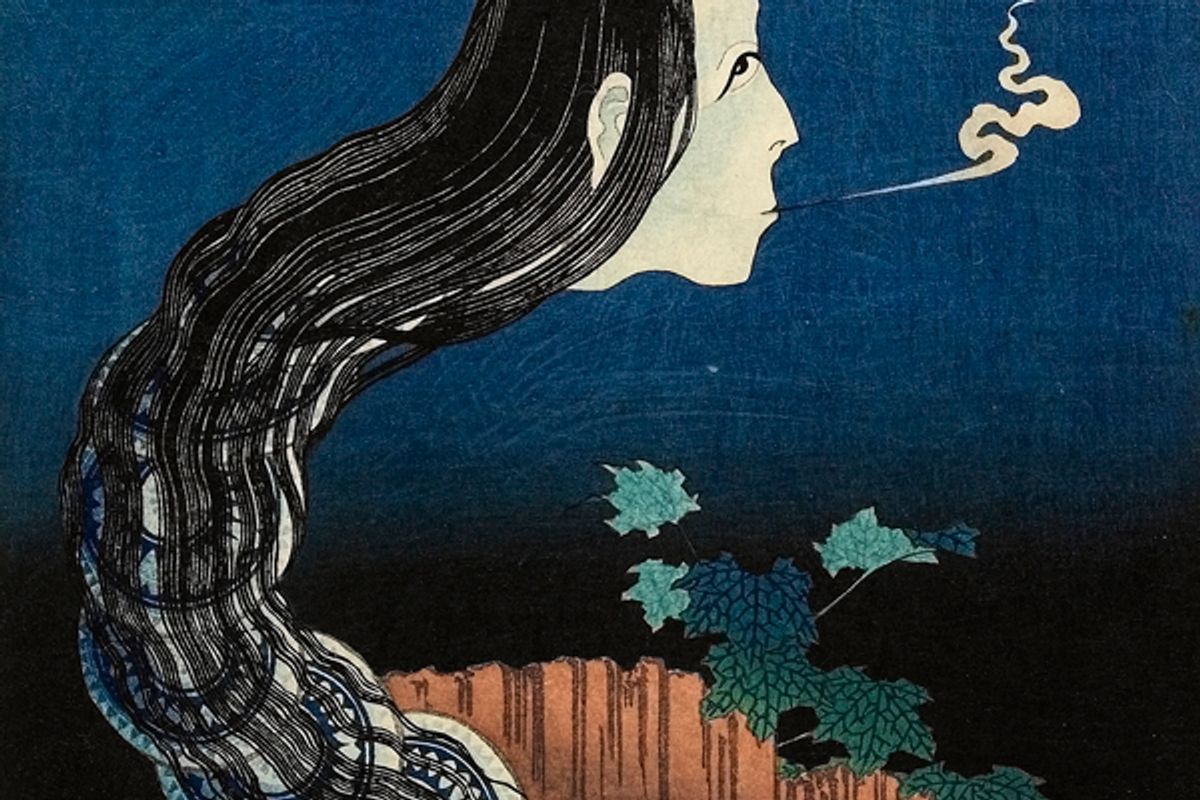 Kabuki actors, courtesans, ravishing teahouse girls and ghosts: These are only some of the denizens of Edo Japan's so-called "floating world." Their stories -- and the natural landscapes in which they took place -- were richly illustrated by contemporary artists such as Hokusai and Hiroshige, whose prints, known as "ukiyo-e," were bought and distributed by all sorts of people in the thriving, rapidly developing metropolis of early modern Tokyo.

This fall, the Minneapolis Institute of Arts will exhibit a portion of its collection of Edo period woodblock prints -- and some of the modern artworks these older images have influenced. Over the phone, curator Matthew Welch told me a little about the Institute's collection and filled in some historical context; an edited transcript of our conversation is below. Check out the following slide show to see some of the prints that will be on display.

How did the Minneapolis Institute of Arts get these 3,000 or so woodblock prints? Where did they come from?

From various donors throughout our history. But the most important were two men: Richard P. Gale, a former U.S. Representative from Minnesota who collected woodblocks, and Louis W. Hill, Jr., who was the grandson of James J. Hill, who brought the railroad to Minnesota and then on to Seattle. Louis Hill honeymooned in Japan as a young man, and sort of had a passion for Japanese woodblock prints ever after -- particularly the landscape scenes by Hiroshige.

So the majority of the collection comes from them.

That's right. I think there are slightly over 300 prints from Mr. Gale. He was really a collector's collector, so, you know, if he would get a better version, or better representation of an artist, he would sell or trade away the lesser version. He really refined his collection, and each of his prints is really fantastic.

Mr. Hill was just terribly, terribly enthusiastic about Japanese prints, and he purchased them by the armload. He certainly understood connoisseurship, but he also just really enjoyed investigating what was being pictured. So he gathered about 2,500 prints.

How does this collection stack up against other collections in the United States and in the world?

Well, although some 2,700 prints sounds like a lot, I think the Boston Museum of Fine Arts has something like 80,000 -- and I think the Art Institute in Chicago has over 20,000. So as it goes, it's not a massive collection. But I think there's great quality among the works that we do have.

These types of prints are called ukiyo-e -- "pictures of the floating world." Where does that name come from?

There was a novelist in Japan called Asai Ryoi, and he published a book in 1661 called the "Ukiyo monogatari," or "Tales of the Floating World." His use of "ukiyo" in the title was a wordplay. Of course, Japanese names are written in characters -- and there was an old compound, "ukiyo," that was a Buddhist word that meant "miserable life" (because basically in Buddhism, life was believed to entail suffering; you would die and be reborn in an endless cycle). And so there was this very pessimistic view in Buddhism, that life was misery. But in the 17th century in Japan, life didn't seem so terrible anymore. Japan was finally at peace; cities were being rebuilt; people were moving from the countryside into these massive cities. By 1700, Tokyo was one of the largest cities on earth, with a population of a million. And life seemed pretty good -- particularly for those people who lived in the cities. Asai Ryoi lived in Edo (what is modern-day Tokyo), so he creatively named his novel "Ukiyo monogatari," but changed that first character from "misery" to another character, "floating." There's actually a quote from him saying something like, "Life is floating down the river like a gourd." There's this idea of a kind of buoyancy, a kind of easiness to life -- very much different from that old Buddhist concept of a miserable life.

And other artists then picked up on that idea?

Exactly. Asai Ryoi was a writer of popular fiction, and so everyone began to refer to these woodblock prints as "ukiyo-e" ("e" means pictures). The earliest prints were really illustrations within books; it was a little while before artists began to produce just single sheet prints. But the name, nevertheless, stuck -- and so all of these kinds of things that picture "scenes of the floating world," or life in and around Edo at the time, are referred to as "ukiyo-e."

And they were bought by kind of up-and-coming, nouveau riche people?

Exactly. The point is that they were mass-produced -- they're woodblocks, so they're not original works of art -- and almost anyone could afford them. Now, it is true that some print artists were indulged by their publishers. They were allowed to create very deluxe productions with specialized printing, and so on. It's likely that those were more expensive, and maybe not everyone could buy them. But on the other end of the spectrum, there were pretty inexpensive prints produced as well. I think it's fair to say that there was something for everyone.

So even though this was a period when Japan was isolated from the West, these sound a bit like printed ephemera produced in England, France or elsewhere in western Europe at the time.

That's right. That's exactly it. The important point is that these are really art for the people. The woodblock print artists catered to the interests and tastes of this rising middle class for the first time in Japan's history. Prior to this time, anything that was considered art was really the purview of the aristocratic, or the wealthy at least. And so two things happen. One, this middle class engenders their own art form, but also the art form provides subject matter that they're interested in -- e.g. the licensed pleasure quarters and the women there, and the actors of the kabuki stage.

So in a way these were somewhat like tabloids -- depicting celebrities that people would easily recognize?

Exactly. Absolutely. In fact, you know, it was permissible to put a courtesan's name on a particular print -- but the government passed an edict saying artists couldn't use other people's names. A good example is the famous print artist Utamaro. He found a teahouse girl that he thought was particularly attractive, and so he produced a print with her name on it. But the government soon ruled against it, because it [caused] too much attention for a person, and tended to celebritize just anyone.

Then artists started making these little picture rebuses, so people could buy the print and figure out who was depicted. Ultimately, the government ruled against rebuses, too -- but towards the end of the 18th century, artists began to depict these beauties and kabuki actors more descriptively, so that you could actually recognize the visage of the person you were buying. Before that, they tended to be a little bit generalized, and you'd have to know, for example, the crest on the actor's costume to know who was really being depicted.

I think the image I find most arresting of this entire set is the Hokusai print with the deep blue background -- "The Manor's Dishes" [slide 4]. Can you explain what this picture shows?

This is from a series of five prints by Hokusai. The series is called the "Hundred Tales," and it's basically ghost stories. (At the time, it was popular to get together with friends on a hot summer night, stay up late and tell each other ghost stories.)

This particular image from the series is called "The Manor Dishes." The story is that this lowly serving maid was washing this set of rare, blue-and-white important dishes for her lord, when she inadvertently dropped one and broke it. He, being the evil lord, murdered her and threw her down the well. Every night afterwards, her ghost would emerge from the well and count the dishes. When she reached 10 (the broken dish), she would wail miserably and disappear back into the well. And she continued to do this until it drove the lord to distraction and he killed himself. Those are dishes that form her wispy body -- and then the smoke coming out of her mouth is actually meant to be her plaintive cry.

Some of the works in your show are contemporary pieces inspired by Edo ukiyo-e [e.g. slides 8 and 9]. Can you tell me a little about these? Is this a popular genre now?

I wouldn't say it's a major genre. The point I was trying to make [by including these] is that these older prints continue to influence artists. They continue to be admired for their very courageous compositions, and startlingly graphic approach to design -- an approach that seems fresh even now, nearly 200 years after they were created. I thought it would be interesting to start finding artists who [are inspired by these prints today].

"Punk Ebizo" [slide 8] is by a great Japanese artist, Yoshitomo Nara. Here, he takes a Xerox of a color woodblock print from a book, and he draws over the top of it. Then that adulterated image is made into prints. To a degree, Nara's approach has always been a very childlike one; his art is sort of akin to doodles ... In this particular piece, he changes the original image of Ichikawa Ebizo that was produced in 1794 -- updates it by giving Ebizo kind of punk, spiky hair, and shoulder spikes and an earring and a skull ring. That's interesting in and of itself. But it's even more interesting when you realize that the Ichikawa Ebizo lineage of kabuki actors is now in its 11th generation -- so there is now an 11th-generation Ichikawa Ebizo, who is something of a bad boy in Japan. He is a renowned and admired kabuki actor, but he's also done some crossover work and starred in movies. He's known [for] sort of staying out late, going to clubs, stuff like that. It may be that Nara is making a slight social commentary, suggesting that this is the 21st-century punk version of the 18th-century, original Ebizo.

Iona Rozeal Brown [slide 9] is an African-American artist who lives in New York. I think in the '90s she became fascinated with this phenomenon called ganguro -- which is black-face in Japan. Japanese young kids who were very much into hip-hop [at the time] wanted to emulate their black hip-hop idols, so they began going to tanning salons, or buying makeup to literally darken their skin. As an African-American woman, Iona was intrigued if not a little offended by this -- but she wanted to know what on earth they were up to. And she actually went to Japan, and lived there for six years and investigated this whole phenomenon. What she discovered was that [these kids] really were that serious about hip-hop, and admired their idols so much that they were attempting to emulate them. But painting the series was one way for her to sort of work through what she was learning about Japanese culture. At the same time, it was something she discovered she couldn't entirely work though -- it still makes her somewhat uncomfortable. She also does a little bit of that appropriation herself, in that she, in creating this image that's based on a woodblock print image by Katsukawa Shunei from the 18th century, adulterates the pose of a kabuki actor.