The ashes I wasn't meant to find

When I stumbled upon a mysterious box in a cemetery, I didn't know what to do -- but I had to do something 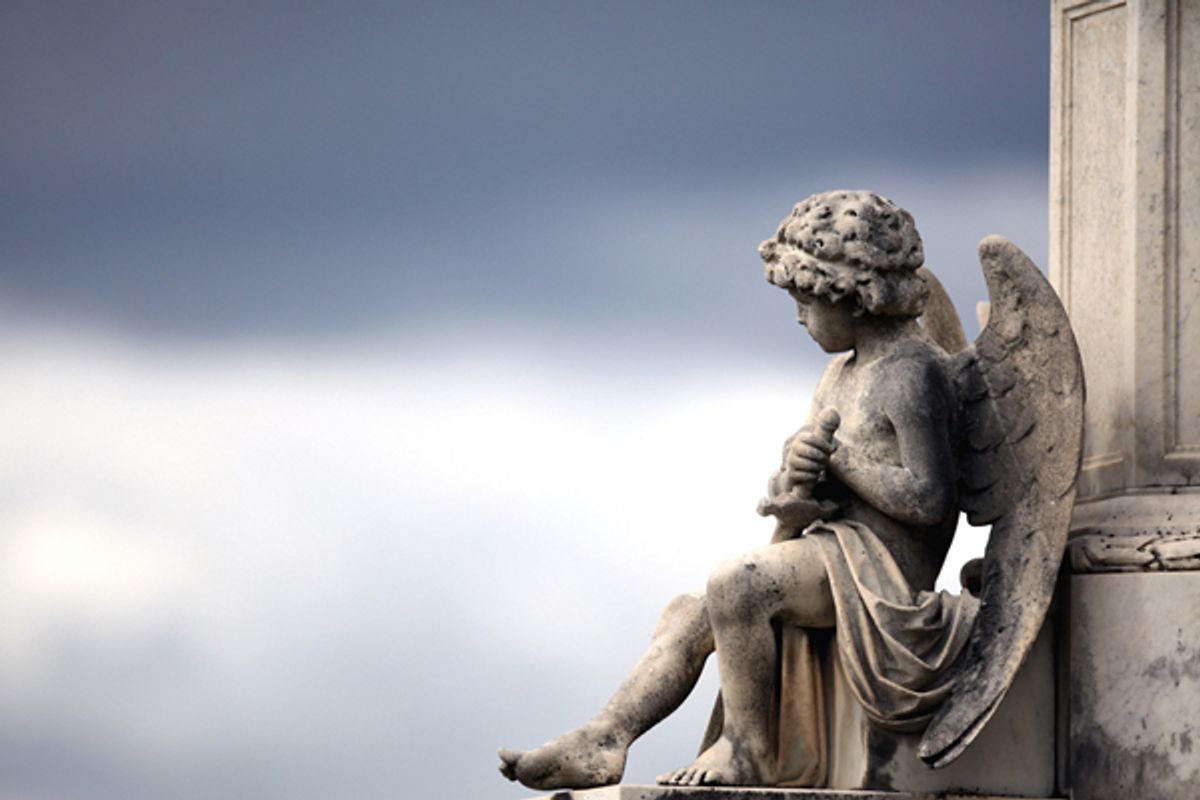 I have a long-standing fantasy that I’m going to find the $7 million that once belonged to gangster Dutch Schultz, who secreted the cash in the upstate New York hills where I live. The money has been missing for decades, so when I first saw that box, sitting there in the graveyard where I occasionally walk my dogs, I actually said out loud: "Oh my God, it's buried treasure."

The box wasn’t nearly large enough to contain so much money — it looked as if it might be a 4-by-6-inch index card box — but then again, how many times do you stumble across a box sitting in an open hole?

I crouched down, the late afternoon Friday sun hot on my neck. The box was not stone, as I had originally thought, but a heavy-duty black ridged cardboard. Hmm, I thought, perhaps someone’s family heirlooms?

On a grave not too far from where we stood, someone had left several pieces of costume jewelry atop one of the headstones. I lifted the heavy box out of its shallow hole. On one end, someone had typed a white label.

My hands began to shake. “Oh. Oh my. I’ve found human cremains,” I said out loud to the dogs.

When I was a kid, my cousins and I would hold our breaths in the car. We lived in the Midwest, so it wasn’t some attempt to block out the miasma of a freshly manured field or the local pig farm that drove such behavior. We were used to those smells. But, just as we knew that stepping on a crack would surely break your mother’s back, even if we didn’t understand the mechanism by which that would happen, we understood that if you were in a car that was driving by a cemetery, you had to hold your breath.

Maybe that’s when my fascination with graveyards began. Living where I do now, and drawn to the history that can be gleaned from the gravestones here in central New York, I have walked cemeteries that were designed by Frederick Olmstead — the architect of Central and Prospect Parks — and tiny pioneer graveyards that have all but disappeared underneath the dead leaves and myrtle that cover the forest floors. In a Catholic cemetery next to one of the glens lies entombed the remains of a victim of the HMS Titanic. In many of the graveyards I have found stories of families’ heartbreaks: multiple children buried, too many young women who died in childbirth, too many sons lost in 200 years of war.

At the graveyard that is closest to my house, the border between the living and the dead is frozen. In the winter, the long, sloping hill that bounds the east serves as a training ground for young snow sledders. After school, before the sun sets by 4:30, or Saturdays and Sundays, troops of young children and their parents jump on their toboggans starting at the outer graves and slide down toward the snow bowl at the bottom. I have always thought, in a fanciful way, that the people underground are divided between those who enjoy watching the show, and others, who want to yell at the kids to “get off my lawn.”

A few weeks before I found the cremains, I had taken the two dogs up to the field adjacent to the graveyard so that they could run off-leash in the grass and into the woods. At the borders of fields, cemetery and woods, about halfway between two rows of graves and among the roots of a giant red oak, they found a freshly dug woodchuck tunnel. Excited by evidence that the woodchuck was nearby, the girls began to dig. They took turns, and at times, I watched as a head disappeared down the growing hole. I held my breath, imagining the unearthly scream of a dog with a woodchuck attached to its nose. I pulled them away.

Three weeks later, Hurricane Irene blew through, and trees throughout the area were uprooted. As if pulled by Irene’s drag, Hurricane Lee came through with even heavier rains. When I took the dogs back up to the cemetery in search of dry ground for us to walk, we returned to the field. The dogs ran over to inspect the woodchuck hole. The hole had been washed out. It was now a pan-shaped depression, maybe a foot deep. Sitting in the center of it was a marbled black box.

Having discovered that it was ashes, instinct told me to drop the box like a hot kettle, but I overruled that in order to place the box back in its original position. But now what? I felt I could not leave it there: Animals would scatter what was in the box, and that bothered me. Surely someone would know what I should do.

It was after 5, a Friday evening. I used my cellphone to call a friend who sits on the town board. No answer.

I tried another board member. Again, no answer, and I realized, as I was listening to myself explaining my conundrum to the voice mail, that I was leaving crazy messages about being in the local cemetery and did they know what I should do with the box of cremains I had found?

But why? I didn’t know this person.

I had noticed that the name on the box matched the stone closest to the hole. A birth year — 1922 — the hyphen ending in a blank space. I saw in my mind the old man’s widow, garden trowel in hand digging a hole. She had wanted him to be close to his family, but something had prevented her from having her husband properly interred. How sad, I thought. And it was her poor luck that a woodchuck had tunneled right through the ersatz plot.

I thought of my own 95-year-old grandmother. If someone in the future were to find her ashes somewhere they shouldn’t be, wouldn’t I want someone to intervene on her behalf?

The town library was still open. I asked the clerk who she thought I should call. “Wait, you found a body?” she asked.

“Well, can you take them home with you?”

“Um. No. I don’t think so. Besides, I think it’s illegal, isn’t it? But I can’t just leave them here.” I thanked her for her time.

I slapped at a lazy deer fly, looked toward the valley to see if I could see anyone out walking. No one.

But afterward the words echoed: I could take them home. I imagined reaching back into the scooped-out earth, picking up the box, and placing it on the passenger seat. I'm a klutz. Chances are, ashes would blow all over the inside of my car. Besides, the idea of bringing home a stranger’s cremains creeped me out. Aren’t half of all horror stories about disturbing the remains of the dead? He needed to be properly attended to. And I knew that the fact that I had just referred to the ashes as “he” meant that some time in the past 15 minutes, I had committed myself to seeing this through.

Next idea. I called the county sheriff’s office. “So, you’re saying that you didn’t find a body, you found ashes, and you’re in a cemetery.” The male voice on the other end of the line sighed. “Ma’am. It’s a really busy night down here, and all the cars are out, but if you leave me your number, I’ll have my sergeant give you a call. Maybe in an hour or so.”

I walked around the perimeter of the cemetery until I found a black iron sign. It listed two phone numbers. Again, I left a long, detailed message about what I had discovered on voice mails.

By this time, my partner, Rob, had arrived home from work and had driven up to join me.

“You really thought this was buried treasure?”

“I know. Pretty dumb, huh? Should we just leave it?”

Rob put his arms around me. “No. Too many scavengers around here. We’ve probably got an hour or so before sunset. Let’s keep working on this.”

When I was 8, my parents moved my brother and me to a small house whose backyard abutted a graveyard. After school, my new friends told me stories about the characters who hung out at the cemetery: the old man who came and sat by his dead wife’s grave every night; the lantern that hung by a hook on a pole over one of the graves, and how that light mysteriously turned itself on each night at dusk; the horse-and-buggy that drove through the cemetery at night, and that one of the boys sworn he had seen. “A ghost carriage,” he said. “It’s real. I’m not lying.”

I thought of those stories as I looked at the sun sinking lower in the rose-colored sky. As a kid, I had been frightened of the dead, but now, I only saw the good in the person — perhaps he had loved his wife so much he had sat vigil with her every night. Goose bumps flew up my skin.

My phone rang. It was the cemetery owner. “And what is the name on the box?” he asked.

“I don’t have any record of such a person,” he said. “Someone must have left them there, because we bury cremains much deeper than just a foot." He continued, “Wow. This is just like the other local cemeteries.” He was referring to the bizarre story I had seen a few weeks ago. Several cemetery owners had reported finding ashes — and bodies — buried without the knowledge of the graveyard owners. Improper burial of a body is not only illegal, it’s also considered theft. People were stealing space in a graveyard — the owners’ only source of revenue. The people who were interviewed said that improper burial was another symptom of a hard economy.

Times are lean here: Our local food pantry is feeding 15 percent of our people; the natural gas companies are trying to persuade folks to lease their land for fracking; turns out, people were also secreting their dead into shallow graves.

“Listen,” he said. “I can’t get there until tomorrow morning. I doubt anyone is going to steal the cremains tonight. It’ll be dark soon. Can you mark the hole in some way?”

“Do you want me to throw dirt on it and bury it for tonight?”

“No. I won’t be able to find it. What about a tree branch or something?”

I explained to Rob what I had been told. “I don’t know, Lorraine. I’m concerned that scavengers will get to it.” He looked around. “Look, what about piling stones on top of it?”

For the next 20 minutes, we gathered the fist-and brick-size stones from the clearing by the woods, carrying them back to the hole and stacking them. Even after we had placed a half-dozen on top of the box, we continued.

I realized we were building a cairn, an ancient form of marker.

He’s here, I was thinking.

Evening sounds enveloped us as we worked: crickets, cicadas, chickadees, the keen of a hawk. In the distance, a herd of deer grazed; a murder of crows squawked in the trees; turkey vultures circled. The natural order dictated that, as the sun set, the graveyard would be ceded to the wild and the dead.

My old childhood ritual had been silly. This ritual — the burying of the dead — was as natural as drawing breath.