Why inequality in America is even worse than you thought

A new study shows economic and social conditions in the U.S. rank near the bottom of the developed nations 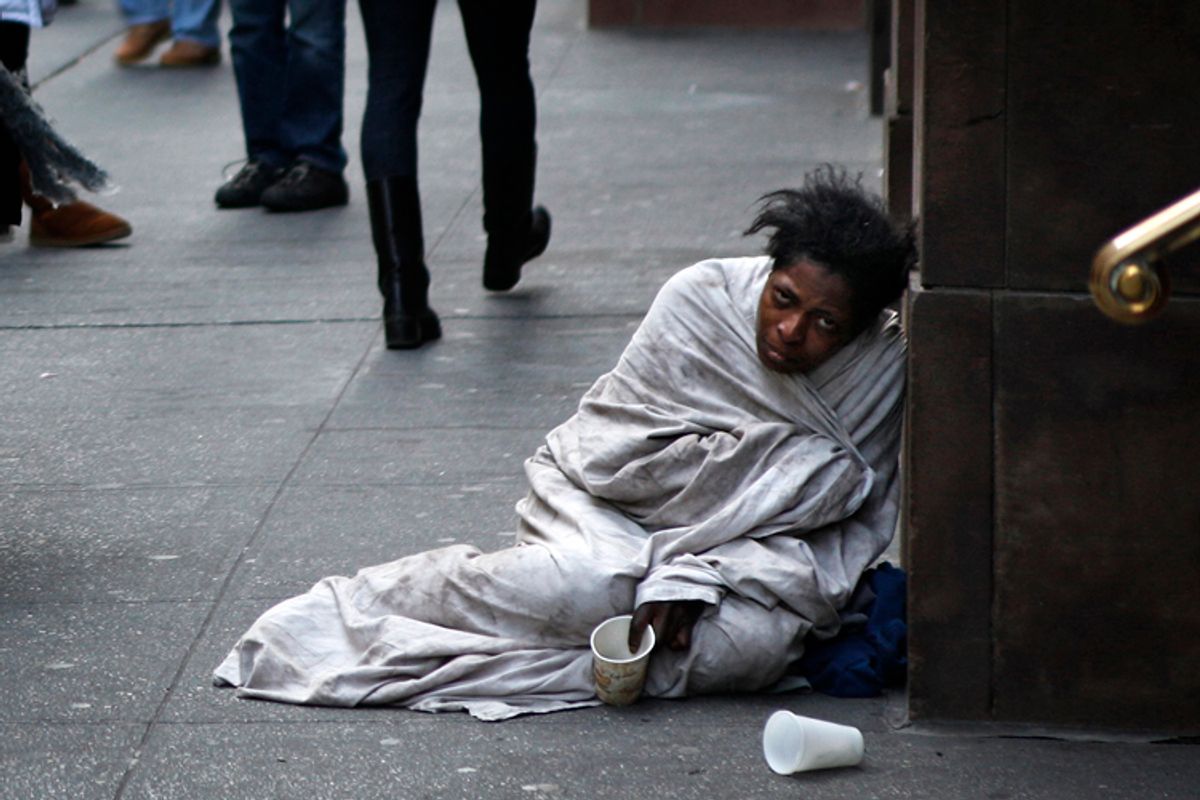 There has been no shortage of headlines this week about the growing income and wealth inequality in the United States. A new study from the Congressional Budget Office, for example, found that income of the top 1 percent of households increased by 275 percent in the 30-year period ending in 2007. American households at the bottom and in the middle, meanwhile, saw income growth of just 18 to 40 percent over the same period

But less attention has been paid to the fact that not only are the numbers bad in America, they're particularly bad when compared to other developed nations.

A new report (.pdf) by the Bertelsmann Foundation drives this point home. The German think tank used a set of policy analyses to create a Social Justice Index of 31 developed nations in the Organisation for Economic Co-operation and Development (OECD). The United States came in a dismal 27th in the rankings. Here, for example, is a graph of one of the metrics, child poverty, in which the U.S. ranked fourth-to-last (click for larger size): Daniel Schraad-Tischler, who authored the study for Bertelsmann, explained to me how the Social Justice Index works and why the U.S. ranks so low.

The U.S. ranks 27 out of 31 in your Social Justice Index, clustered around countries like Turkey and Slovakia. If we have the biggest economy in the world, why are we so low in this index?

Social justice does not depend solely on a nation’s wealth or its economic prosperity. Social justice is about creating equal opportunities for every individual. It is thus decisive that the right priorities are set in a number of policy fields. We have tried to measure the degree of social justice in each OECD country by looking at six key factors: poverty prevention, access to education, labor market inclusion, social cohesion and non-discrimination, health, as well as what we call "intergenerational justice." The U.S. receives particularly low scores in the area of poverty prevention. Income poverty afflicts 17.3 percent of all Americans, including 22.2 percent of the elderly and 21.6 percent of children.

We argue that the prevention of poverty is a fundamental precondition for social justice, so it is weighted most strongly in the overall ranking. Under conditions of poverty, social participation is possible only with great difficulty. The United States' low score in poverty prevention is one of the reasons why the U.S. is so low in the overall ranking. But there are also problems in some other areas -- education, for instance. The impact of a student’s socioeconomic background on his or her educational success is significant in the U.S.. This also undermines the idea of equal opportunity.

We also ranked quite low in poverty prevention. What is that and what are countries ahead of the U.S. doing better than we are in this area?

One has to bear in mind that poverty in our index is defined as relative income poverty, not absolute poverty. Compared to a country with a very low income poverty threshold (Mexico, for instance), a wealthy country like the U.S. has different standards of what is normal when it comes to access to goods and services. The causes of income poverty are undoubtedly complex. In many ways income poverty reflects the consequences of weak policymaking in areas such as education, labor market and integration of immigrants into society. The Nordic countries, for instance, have low poverty rates because their educational systems as well as their labor markets are very inclusive. They also have welfare states that invest actively in each individual's capacities so that socially disadvantaged groups are not excluded. Investing in early childhood education is also a key instrument to level the playing field and create upward mobility.

Can you explain the concept of "intergenerational justice" and how the U.S. is doing in that area?

The phrase refers to the need for contemporary generations to lead lives they value without compromising the ability of future generations to do the same. The concept comprises three components in the Social Justice Index. First, we use expert assessments of family and pension policies to evaluate measures aimed at both younger and older generations. Second, we look at a country’s environmental policy and how effectively it protects natural resources. And third, we look at economic and fiscal sustainability. That takes into account the level of public investment in research and development and, on the other hand, the level of national debt, which is a mortgage to be paid by future generations. When we look at the United States' performance in these areas, the picture is mixed. Its massive level of debt (more than 100 percent of GDP) in particular puts a strong burden onto future generations. And with regard to environmental policy, the U.S. has still some catching up to do when compared with other OECD countries.

What are the policies that caused Northern European countries like Norway and Sweden to do so well in the rankings?

The Nordic countries generally have relatively equitable and egalitarian societies. Values like equality, integration and community are deeply rooted in these countries' societies. The Nordic states are very successful in creating equal opportunities in education and the labor market. They are also at the forefront of efforts to combine parenting and labor market participation. The system of daycare centers in these countries – which are used by the great majority of children – allows sufficient flexibility for both parents to work.