A sex guide for today's girls 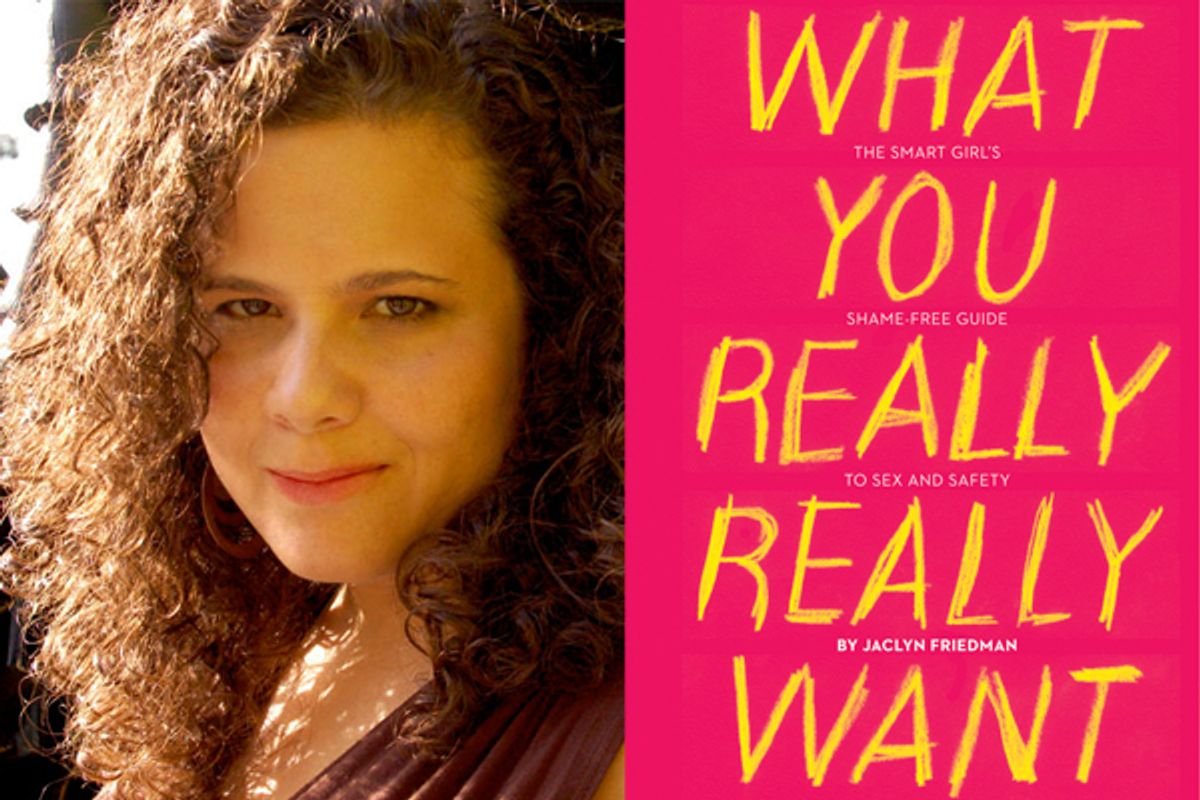 The 39-year-old activist has written about looking for hookups on Craigslist's Casual Encounters, expounded on the challenges of "fucking while feminist" and passionately advocated for the "Slut Walk" movement. But regardless of whatever parental discomfort her raunchy CV may inspire, she's written just the sex-advice book that teenage girls – and plenty of their elders -- desperately need right now: "What You Really, Really Want: The Smart Girl's Shame-Free Guide to Sex and Safety."

Too many books in this genre promise certain drive-your-man-wild tricks, or they take a side in the politicized debate over hookup culture. Friedman instead has one thing on her agenda: Getting girls to explore and embrace their own authentic sexual identities without shame, fear or guilt. Instead of arguing for empowerment through one-night stands or, conversely, abstinence, she leaves it up to young women to decide what it is that's best for them. But she also offers guidance along the way, urging them to critically examine the social pressures and media messages that have shaped their understandings of sexiness, sexual fulfillment and love.

I spoke to Friedman by phone about her own sexual mission statement, how to help women protect themselves without "blaming the victim" and why she's still struggling with criticisms of Slut Walk.

In the book you recommend that women write a sexual mission statement. What's yours?

Wow, well I don't have it in front of me verbatim, but it's basically to maximize pleasure and connection and minimize harm and risk. I mean, there's like an asterisk on every word there, but, yeah, my sexual mission statement is that sex is a wonderful and marvelous thing and the more we can do to pull away the risks and bad things and maximize the good stuff, the better.

You write in the book that you've learned that being wanted isn't the same as wanting. I've often heard female desire described as the want to be wanted. Obviously that's too simplistic, but I wonder if there is some element of biological truth that actually stands separate from the whole mess of socialization and cultural messaging.

I think it's impossible to suggest that we can separate nature from nurture when it comes to sexuality. So I don't think that question is knowable and I don't think it's useful, because each individual person is gong to fall somewhere else on the spectrum. The variation among individuals within the gender is always going to be much wider than the variation between genders. So I don't think coming to any conclusions about something that's biologically true for all women about sex is useful.

It's awfully hard to know where the cultural messaging starts and where the "real you" begins.

Well, like I said in the book, it's actually impossible to know that. There is no real you that's separate from all the ways that we as individuals have been influenced as we've grown up and gone through the world. The idea of some sort of sexual blank slate that you can get back down to and start from is a really harmful idea, because it's impossible to achieve.

I know so many young women who identify as feminist and feel very conflicted about some of what really does do it for them because they feel like it's politically incorrect.

That makes me so sad! No one speaks for feminism writ large, but my feminism says that any one sex act is no more empowering than the next. There's nothing inherently degrading about any sex act. It's all about how both people involved are approaching it. On the flip side, there's nothing inherently empowering about any sex act. I think people sometimes misunderstand my work and think I'm advocating that everyone go out and have casual sex, as though that would be empowering for everyone. What I want is to help women create a sexuality for themselves that is centered around what works for them.

This discussion about active and passive female desire makes me think of Ariel Levy's "Female Chauvinist Pigs." I wonder, how do we give young women feedback on the sorts of "Girls Gone Wild" antics that she writes about and express that there may be truer, more authentic and more rewarding forms of sexual expression without casting value judgments or invalidating their process of experimentation?

The last part of that question is the most important, I think, which is about experimentation. It's a really great question, and it's one of the core questions that the book is trying to answer. The reality is that we have to trust women, we even have to trust young women. Instead of telling women, "This is a productive way to express your sexuality and this is a degrading way to express your sexuality," we have to equip women with the tools to assess risk and reward, and then let women make their own choices.

At the same time, you might believe this is really doing it for you right now, then learn more about yourself as you go, and then you're forever on a "Girls Gone Wild" film, or what have you, and you've signed all your rights away without understanding them, and you only were paid with a T-shirt. That's why I always think the focus should be on the people exploiting female sexuality, and sexualizing women. We shouldn't tell young women, "You only think you want that, but we know better." Who knows? Maybe we're right when we think that, maybe we're wrong about this particular young woman. What we want to do is work toward a world where she's protected from exploitation while she experiments. That's why I blame Joe Francis, and not the young women who participate. Which is where Ariel Levy and I part ways.

As such a strong supporter of Slut Walk, what did you make of criticisms of it?

It seems there are two different schools of criticism, one that is pretty legitimate and that I'm seriously still grappling with, which is about the ways in which the origins of the walk and the ways that its been put into practice can be exclusionary to women of color. That's a complicated and serious issue that I don't have an answer to.

At the end of the day, though, it got a lot of great coverage. I spoke at the Boston Slut Walk and was interviewed and what did I see? I saw the Boston Herald, a notoriously conservative newspaper, Yahoo News and Time magazine publishing all these pieces that really understood what was happening. They said, "These women are marching like this because they don't want to be blamed for rape, regardless of what they're wearing." I feel like if the Boston Herald got the message, then the message was not that unclear.

Speaking of victim-blaming, it seems difficult to dispense advice on how women can be safe while also not giving the impression that it's all women's responsibility. How do you strike that balance?

It comes back to that issue of teaching women how to assess risk for themselves, instead of setting up rules based on mythology like "don't walk around wearing skirts." There's no evidence whatsoever that what a woman is wearing increases or decreases her chances of being assaulted. What we know from actual research is that sexual predators pick victims that seem like they won't fight back. It's not about them being turned on. So I think all of that advice often comes from people who are well-meaning but it's just not factually supported. So I think we need to give women advice on how to find real information.

Let's talk about your essay "My Sluthood, Myself." One thing that really resonated powerfully for me is your emphasis on the importance of getting support from other women. Why is that so important and why is that support so hard to come by?

It's hard to come by because we are taught to divide and conquer and we're taught that out of fear, right? We're taught that if we're "good girls," bad things won't happen to us. So we have developed a social structure in which we distance ourselves from bad girls. It gives a false feeling of being safer. That insidious fear based on falsehood is very dangerous. In the book, over and over again, I talk about the terrible trio which are shame, blame and fear. They're a tool used not only to keep us separated from our own sexuality and our own sexual pleasure but also from each other.