In Fort Lauderdale, a good-natured movement takes the fight to the decks of the one percent. 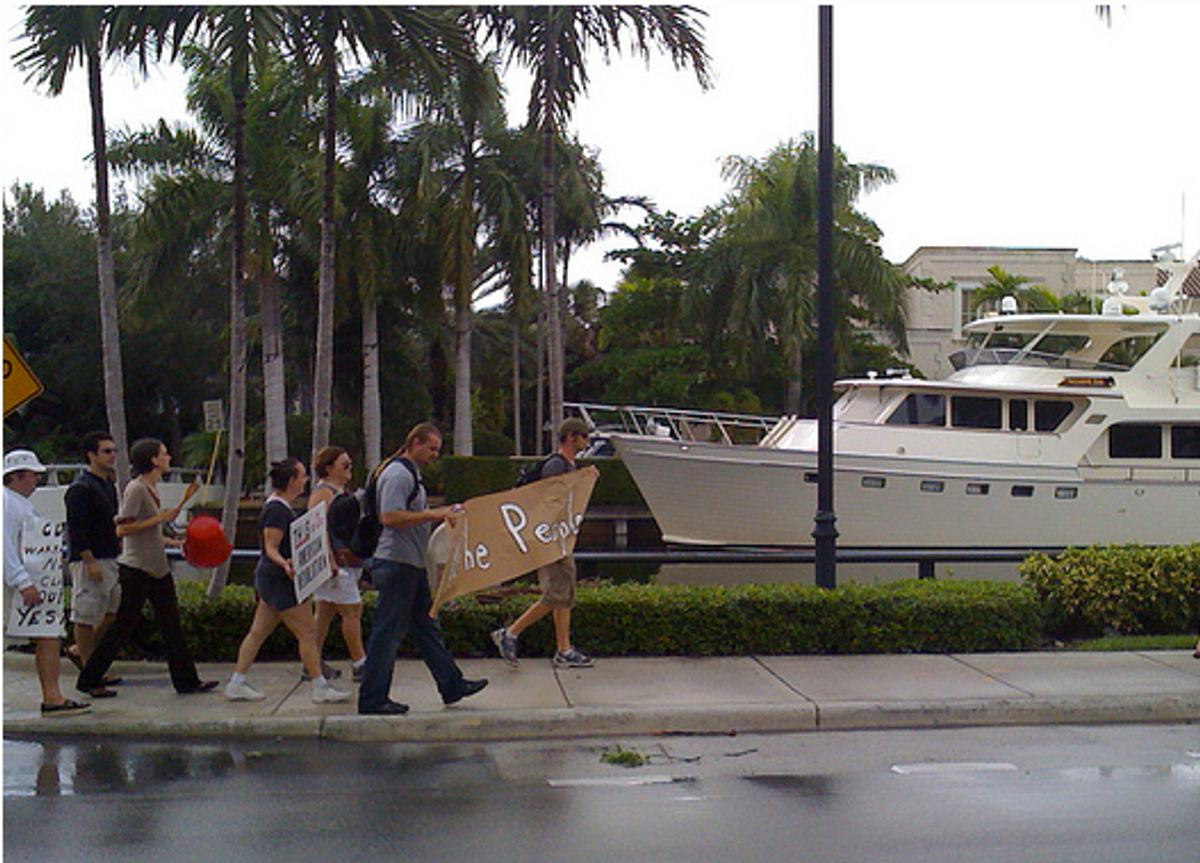 If America’s ultra-rich are feeling unappreciated, a trip to this weekend’s Fort Lauderdale International Boat Show  seemed to offer some solace. After all, it’s the world’s premier annual showcase for yachts, and the city bills itself unabashedly as the “Yachting Capital of the World.”

But this year, not all the residents were in a welcoming mood. Members of Occupy Fort Lauderdale staged a demonstration Saturday afternoon, taking their placards on a nearly 3-mile march from downtown to the beach, where the boat show is being held.

Some 300 demonstrators participated, with the vast majority undeterred by a torrential downpour that began in the march’s first half-mile, on Las Olas Boulevard, a district lined with shops and restaurants. Diners at tables sheltered by awnings marveled at the scene, documenting it with cell phone cameras. Honking motorists echoed the chants of “We! Are! The 99 percent!” Shop owners and servers stood in the doorways, some looking anxious, others inspired.

Appropriately for Fort Lauderdale, one of the leading organizers was a yacht captain, Adam Salater. With a face and arms tanned by months of working in tropical seas, Salater admits that he had misgivings about staging the march, but he couldn’t resist the opportunity to bring the movement to the scores of boat show visitors. He marched at the front of a phalanx of demonstrators that stretched for a city block, carrying a banner that said, “We the People.”

Asked if he was worried about being seen by a prospective employer, Salater said, “Yes, but I’m not going to hide. I’m not going to stand down.” Trusted to pilot boats worth millions, Salater’s livelihood does not provide him with health insurance.

“You have a whole bunch of people here who aren’t even political, " another demonstrator Anthony Olivieri  told me. but they’re angry and they’re struggling, and now they belong to something,”

Street activism is a rare thing here. The biggest city in Broward County, Fort Lauderdale’s population is dominated by commuters to Miami, tourist industry workers and retirees -- a mix that doesn’t usually produce political demonstrations or high voter turnout. Its swank subdivisions are  also home to some of the 1 percent.  Many of the same financiers who bundled mortgage-backed securities in New York vacation in Broward, which neighbors Miami to the south and Palm Beach to the north.

“This is part of their lifestyle, and it’s a place where they depend on apathy,” says Olivieri, adding that a protest in Fort Lauderdale may be more surprising to a member of the moneyed class than one in Madrid or Paris, if only because most South Floridians are in the habit of ignoring how Wall Street affects their lives.

Organizers of the march were careful to emphasize this was a demonstration “at” the boat show, not “against" the boat show, “because most of the people at the boat show are in the 99 percent -- they don’t own the 90-foot yachts,” says Jessica Wilson, a student at Florida Atlantic University. “We wanted to bring signs about corporate wealth and display those against a backdrop of this huge row of yachts, just to show the disparity.”

The demonstrators were mindful of the movement’s image, avoiding anything that might seen as “disruptive” to an industry that is crucial to the local economy.

Another demonstrator -- we’ll call him Jason -- has recently left the industry, where his job was to clean yachts. Jason, who’s 31, describes an average day of arriving with his crew at an $11 million yacht that was in pristine condition, then poring over it to find tiny smudges that they could wipe clean.

The pay was good and it came under the table, but for someone with a college education, says Jason, “it was spiritually degrading.” He couldn’t help thinking it was perverse, how “we serve these objects, but they’re not for us.”

Saturday’s march took the demonstrators through the Las Olas Isles, exclusive fingers of land that border the Intracoastal Waterway and are lined with multimillion dollar homes whose owners appreciate the privilege of being able to dock their yachts near their patios. In this stretch support for the marchers became a bit spotty. “Get a fucking job!” screamed a man from the passenger seat of his black BMW. An SUV driver passed by holding out a thumbs-down.

But Occupy Fort Lauderdale has had a friendly interaction with the city’s police department, aside from having been kicked out of the only two parks they’ve tried to occupy in the movement’s three weeks of existence. Police provided traffic escorts for Saturday’s march, and there were no arrests.

The chanting continued during the 3-mile walk back downtown, even as the rain buffeted demonstrators, coming down at a rate of 3 inches per hour. No one complained -- this South Florida chapter was hearing heard of the fierce winds and snow lashing their Occupy Wall Street brethren in the Northeast and they weren't complaining.

“The rain is not tear gas,” smiled Olivieri, who has participated in anti-war protests that led to clashes with police. “It’s not snow. And it’s not rotten tomatoes.”

Thomas Francis is a freelance reporter based in Fort Lauderdale. His work has appeared in MSNBC.com, The Daily and Village Voice Media papers.