When AMC's zombie show dramatizes its pulpy predicaments, it's riveting; when the characters talk, it's awful 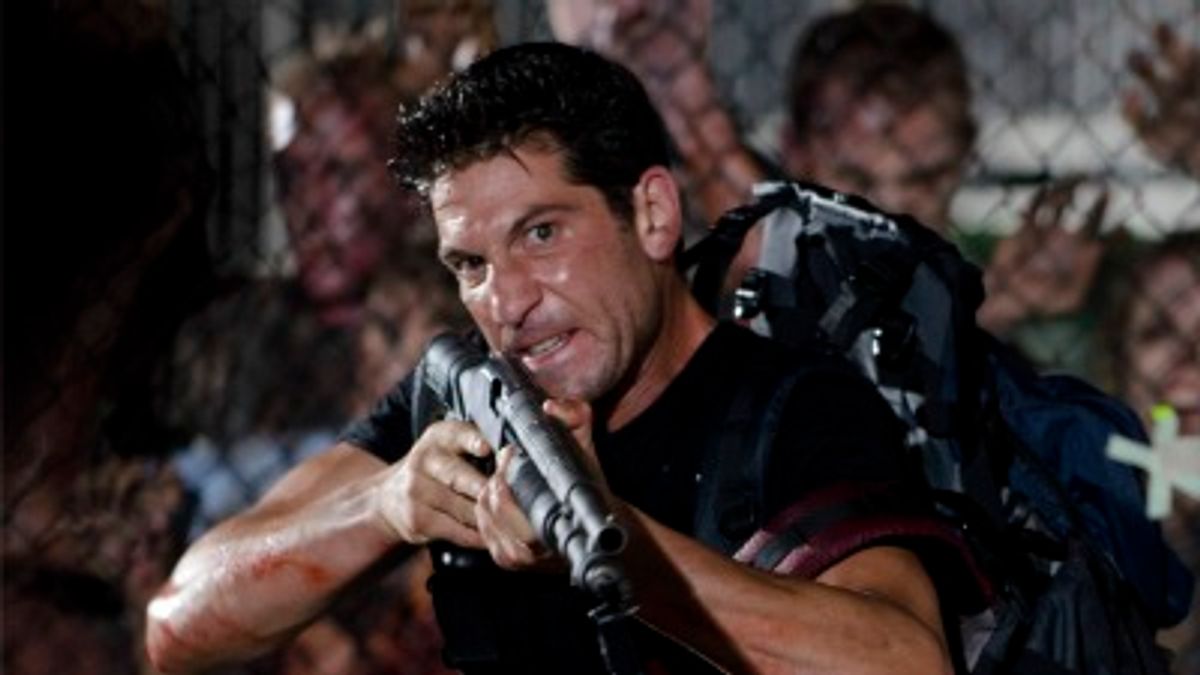 [The following recap of "The Walking Dead" season 2, episode 3 contains spoilers; read at your own risk.]

The best and worst qualities of "The Walking Dead" were on display in tonight's episode; the extremes were so pronounced that my notes suggest the exuberant jottings of a split personality. "Gorgeous." "Oh, for chrissakes, quit while you're ahead -- you already showed that, why re-hash it?" "Some of the best atmosphere on TV." "Oh, shut up." "Jon Bernthal is KILLING in this episode; he has Richard Gere's oily, furtive, 'What am I not guilty of' body language." "I wish Rick and Lori would get eaten so I didn't have to hear their 'discussions' anymore." "Brilliant ending -- best of series so far."

Scott M. Gimple wrote this episode; "Sopranos" veteran Phil Abraham directed. It was the best of "Dead," it was the worst of "Dead." Bottom line: When "The Walking Dead" is dramatizing its characters ' moral and ethical conundrums and letting them play out through physical action (or inaction), it's as good as the very best zombie films that inspired it. But when one character says to another, "Can I talk to you for a second?" the show's slow-burn momentum halts so abruptly that they might as well signal an upcoming heart-to-heart by laying a "screeching brakes" noise on the soundtrack. ("Hey, Shane, ya got a minute?" SCR-EEEeeeeEEEEEEEE!) I wish this show would have faith in its B-movie spirit and considerable filmmaking prowess, model its dialogue on an old cowboy picture, and keep things moving. There's no reason to keep turning every scene into Zombie Oprah. Honest.

I didn't need to hear any of the discussion between Rick and Lori on the porch early in the episode, especially not Lori's facepalm-worthy line line "This isn't a world for children anymore." Everything the couple discussed was implicit in the episode's action, and did not need to be highlighted. Their earnest discussions of the futility of optimism and the moral defensibility of letting their wounded son die paled beside three vivid B-movie moments: 1) the hanging zombie's suicide note, "Got bit / Fever hit / World gone to shit / Might as well quit"; 2) Rick ignoring warnings that another blood drawing might kill him, because a dad's gotta do what a dad's gotta do; 3) the momentarily lucid Carl's account of the last thing he saw before he got shot: that beautiful deer. (You could argue that we didn't need Carl's deer memory, either -- that it was too unbelievable, or too sweet, or too something -- but I liked it; pulp is allowed to be sentimental as long as the sentiment is on-point.) The prayer talk scene between farmer/veterinarian Hershel's daughter Maggie (the excellent Lauren Cohan) and Glenn (Steven Yeun) was similarly overcooked. It would have been just fine if it had ended after Glenn's admission that this was the first time he'd ever prayed; but it had to keep going. Glenn: "You think God exists?" Maggie: "I always took it on faith. Lately, I've wondered. Everything that happened, there must have been a lot of praying going on, and it seems quite a few went unanswered." Just ... shut ... UP.

If Howard Hawks had directed last night's episode, he would have boiled that awkward pop-psych conversation between Dale and Andrea by the Winnebago down to a series of terse gestures -- and just three lines. Andrea opens the door of the vehicle just as Dale approaches and says her name. Andrea pauses for a moment and makes eye contact with Dale. Dale produces a pistol and extends it butt-first; Andrea takes the gun, looks at it for a moment, then says, "I'll take watch." Dale says, "Glad you're back," and goes inside. Andrea climbs the ladder to the RV's roof. Aaaand scene. None of that "... but I can still ask -- and none of this is to make you guilty, or put me ahead of you -- but I can still ask, please, don't make me regret this," which sounds like a line from an as-yet-unaired "Treehouse of Horror" episode titled "Zombie thirtysomething."

The episode's last five minutes were brilliant, and I'm not just saying that because its depiction of a brutally self-interested man briefly allayed my worries that "The Walking Dead" has a "niceness problem." Shane is not an essentially decent man with heel-ish tendencies; he's a sociopath whose moony adolescent fixation on Lori, his post-apocalyptic hookup, might be the only thing stopping him from shooting the other survivors in their sleep, stuffing their food and supplies into the first working muscle car he can find, and taking off for the coast.

The compositions in that bathroom scene briefly (and falsely) implied that Shane had gotten bitten or scratched by a walker and was in danger of turning ghoul. The way he glowered at himself from underneath a Kubrickian ape-man brow made him look (intentionally, I'm sure) zombie-like, and reminded us that the show's title has a double meaning: In a world without law or civilization, we are all walking dead. Although Shane is, in fact, still mortal, the ghoul/not a ghoul distinction now seems almost moot. The flashback revelations confirmed that he's a warm-blooded, autonomous walker -- a monster capable of committing murder to save himself, then lying to cover it up. As my friend Josh Spiegel noted, the sequence might have been more powerful if it hadn't been telegraphed with an "in medias res" opening. But it was still strong stuff: undiluted pulp that explored morality (and amorality) through gory action.

I would have loved the sequence even more if I weren't dreading the stilted conversation about it that's surely on deck for next week. "Hey, Rick, can I talk to you for a second?" SCR-EEEeeeeEEEEEEEE!