Fiction: Sympathy for the Mummy

What happens when an ancient mummy is cruelly unwrapped? Exclusive Halloween fiction by Lynda Barry 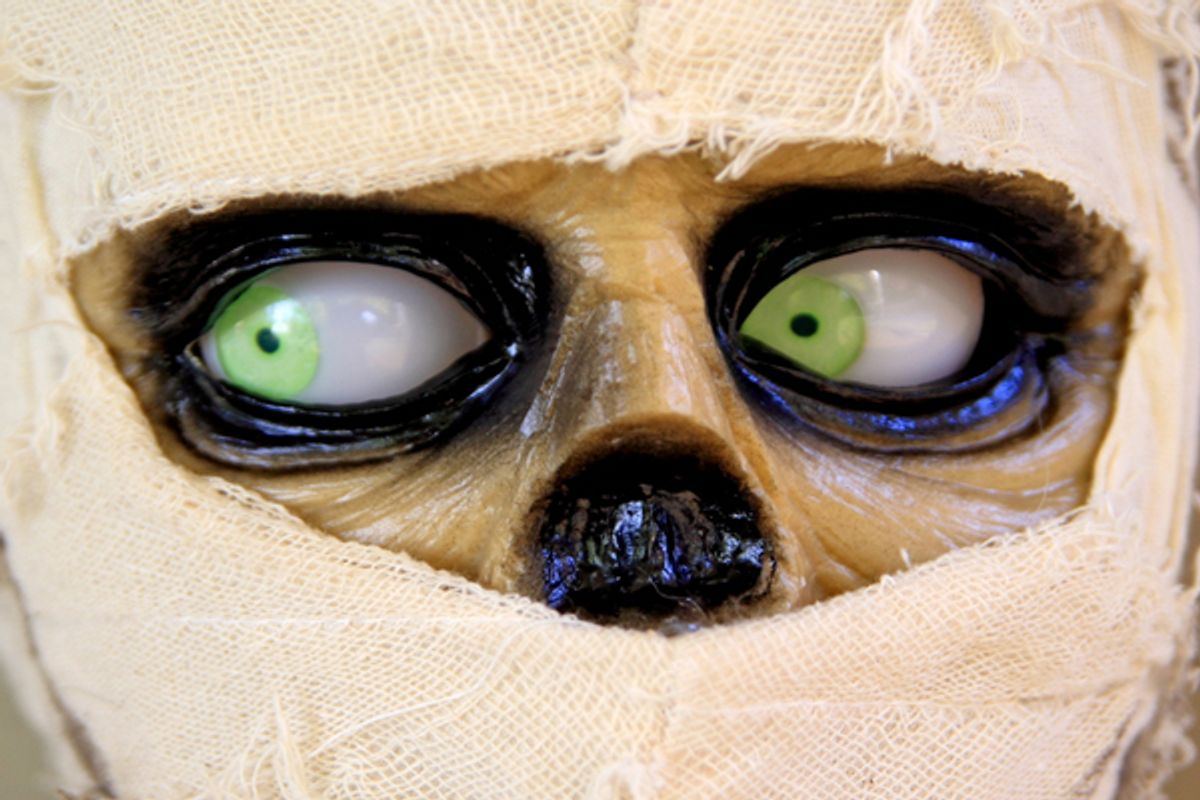 It’s the mid-1800s, and a Croatian guy goes to Egypt on vacation and buys a mummy as a souvenir. So you can already tell what kind of guy he is. The mummy turns out to be wrapped in strips made from a book handwritten on linen in Etruscan, a language that died out 2,000 years ago.

It’s known as "Liber Linteus." It’s the longest Etruscan text ever found. It seems to be a ritual calendar of some sort, but no one really knows what it says. No one has spoken Etruscan for 20 centuries. Only a few fragments have been translated, like this one:

For the spirit of night, for the city, for the people everlasting.

You can see the "Liber Linteus" on display in a glass case in Zegreb. And quite near to it, you can also see that certain someone. You can see the unwrapped mummy that was once inside of it.

How was this treasure of Etruscan writing found? It sounds like something that happened in a frat house. The Croatian guy takes the Egyptian mummy home. He props it up in the corner. He shows it off to his friends when they come over. They make jokes about it. They rattle their drinks and point their cigars at it.

And then one night, who knows why, the Croatian guy is suddenly like, “Know what? I’m unwrapping that mummy.” You know there had to be drinking involved.

His brother goes, “Don’t do it, man! You’ll wreck it. That’s the easiest way to wreck a mummy!”

But the Croatian guy doesn’t care. He’s unwrapping and unwrapping and pretty soon here are the blackened hands with yellow fingernails, here are arms with elbows joints covered with shiny skin dried down tight, here are the darkened feet with perfect toenails, the hip bones -- and it turns out it’s a lady mummy. Here is her face. Her shriveled ears, her dried-out eyelids with lashes still attached, her scab nose and a row of teeth in surprisingly good shape.

If this was a movie and he did that, he’d have to die, right?

He dies, then his brother inherits the mummy. But the brother does not want it. “Before he unwrapped it I would have taken it, but now that mummy is a mess. You can’t fix it back to how it was. Go ahead and sew all that shit back on. Do it. Won’t matter. That mummy is jacked-up forever.”

Other relatives are offered the mummy, but no one wants her.

And this is where I get all sad for the mummy. Where was she kept during this uncertain period? Was she in the sitting room with  evening shadows passing over her face? Was she in a box in a storage unit? Was she having humidity issues?

And what if the Etruscan writing had never been discovered? What then? What do you do with a jacked-up mummy no one wants?

But because of this dead language, you do want her. You display her on a red cloth in a glass case with her head gently raised, the strangeness of her unwrapped body on full view. Her arms by her sides, her lips parted and her teeth looking so alive.

Some kind of big sadness here. Some kind of shipwreck flare. She’s naked under museum lights, she took a wrong turn and she’s stranded in the realm of the living again. Isn’t there someone, somewhere merciful enough to cover her?

For the spirit of night, for the city, for the people everlasting.