Now he remembers the women who made sexual harassment charges against him, and key details 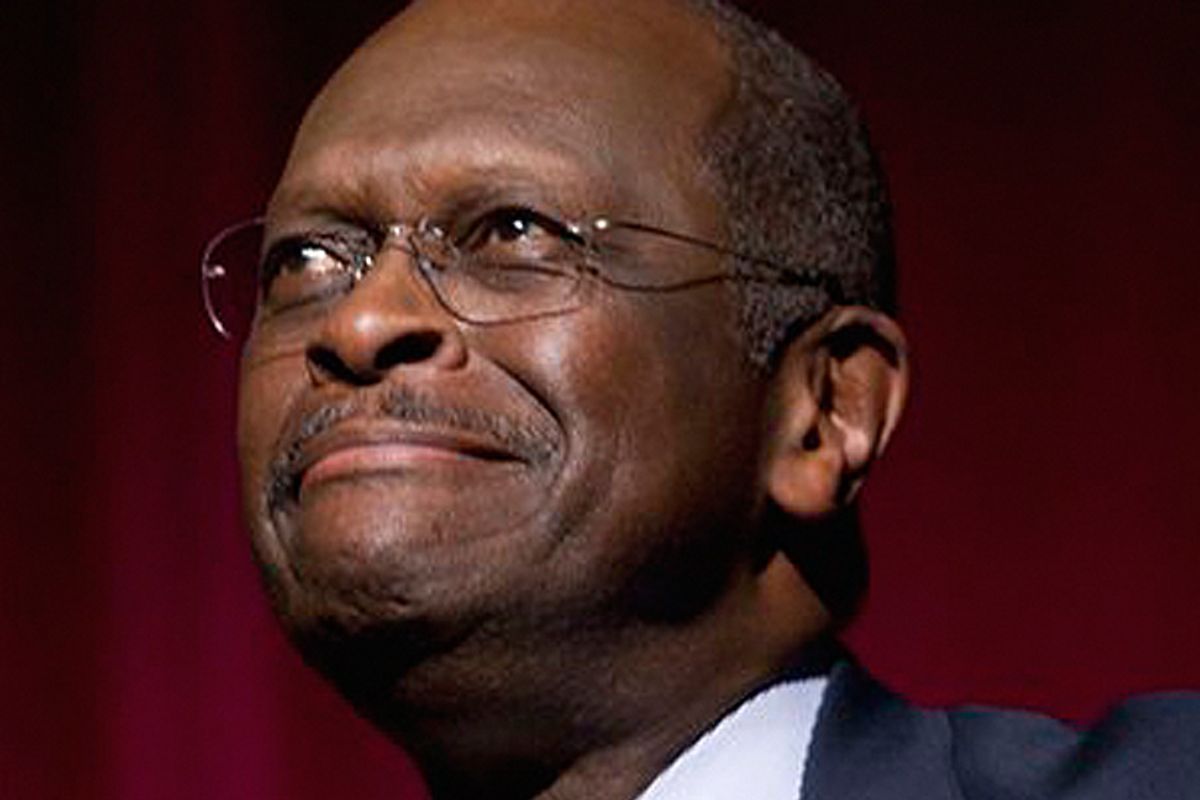 The unlikely GOP presidential contender Herman Cain had scheduled himself a big day in Washington, D.C. to talk about his economic plan Monday, but Politico changed his agenda. For a while, that seemed like it could be good news for Cain.

When Politico dropped a thinly sourced bombshell story about sexual harassment allegations against Cain back when he ran the National Restaurant Association, I thought it might actually help the former Godfather Pizza CEO. Anything would be better than trying to answer questions about his "9-9-9" tax plan, I reasoned, and early this morning it looked as though Republicans were rallying around Cain as a victim of "liberal media." Laura Ingraham suggested her talk show listeners should "Occupy Politico," and Rush Limbaugh insisted the publication is racist. Listening to conservatives denounce Politico as liberal is great fun given Politico's ties to the Republican Party.

But after refusing to answer Politico's questions for at least 10 days, Cain began addressing the allegations on Monday, and as the old political cliché goes, the coverup, or the cover story, may wind up being worse than the crime. First he insisted he didn't know about any settlements paid by the restaurant group.  "If the Restaurant Association did a settlement I wasn’t even aware of it and I hope it wasn’t for much because nothing happened," Cain told Fox. Then he said he knew about the allegations and the settlements, but "recused himself" and let the group's human relations director handle them. But Politico followed up with former HR director Mary Ose, who said she had nothing to do with handling any allegations against Cain. Told that Cain said she did, Ose insisted, "He did not say that." When reporter Jonathan Martin read her Cain's claims, Ose then replied, “You and I have talked and I have nothing to say.”

Toward the end of the day, Cain sat down with Fox's Greta von Susteren and told a different and much more detailed story. He even remembered the women who made the claims; one worked in the communications department, and another in the governmental affairs division. He knew that the communications staffer had complained about a particular gesture, according to Byron York:

She was in my office one day, and I made a gesture saying -- and I was standing close to her -- and I made a gesture saying you are the same height as my wife.  And I brought my hand up to my chin saying, 'My wife comes up to my chin.' And that was put in [the complaint] as something that made her uncomfortable… something that was in the sexual harassment charge.

(Note to male bosses: It's really never a good idea to compare a female staffer to your wife.)

Cain also went from not knowing about a settlement to even knowing roughly how much money was involved. "Maybe three months' salary.  I don't remember.  It might have been two months," he sold Van Susteren.  "I do remember my general counsel saying we didn't pay all of the money they demanded." Note that Cain isn't saying he didn't know about any of this, but he was briefed about the settlements today, after Politico broke the news; he's now recounting memories he didn't seem to have this morning.

Cain insisted he didn't know anything about a sexual harassment allegation by the NRA governmental affairs staffer.  Politico reported it involved an "unwelcome sexual advance" while on a business trip to Chicago. Cain told Van Susteren, "When we were at the restaurant show, I was constantly talking with different staff members about different issues.  If I had a private conversation with her, I don't recall it." I thought it was interesting that Cain mentioned a specific "restaurant show," when Politico didn't specifically mention what the business trip in question involved. I'd look for Cain to recall more memories about that woman's allegations as well in the days to come.

I don't know what went on between Cain and the RGA staffers. Pro Publica's Stephen Engelberg raises some good points about unanswered questions in the Politico "scoop." Although the publication said it knew the names of the women who made the allegations, it didn't share them. It relied entirely on anonymous sources, who mainly seemed to know about the charges secondhand. The allegations are almost 15 years old. And the news that the RGA made a settlement that was in "five figures" is suspicious. Engelberg asks:

Were the settlements $99,999 each (to borrow some of Cain’s favorite numbers)? Or a buck more than $9,999? The former would suggest, but not prove, that something seriously untoward had occurred. The latter would sound like what lawyers term nuisance settlements – the money corporations routinely shell out to make frivolous claims go away.

But Cain's handling of the allegations is making the Politico scoop an even more legitimate story. Once again, he can't get his facts straight; he doesn't even seem to think he needs to. Cain seems to think he can treat the facts about the sexual harassment charges as haphazardly as he treats the facts about his "9-9-9" plan. Like it or not, the media seem to care more about sex stories than tax fairness, and Cain may pay for his sloppiness this time. Will his anyone-but-Romney supporters care? We're about to find out.