So who dropped the dime on Herman Cain? 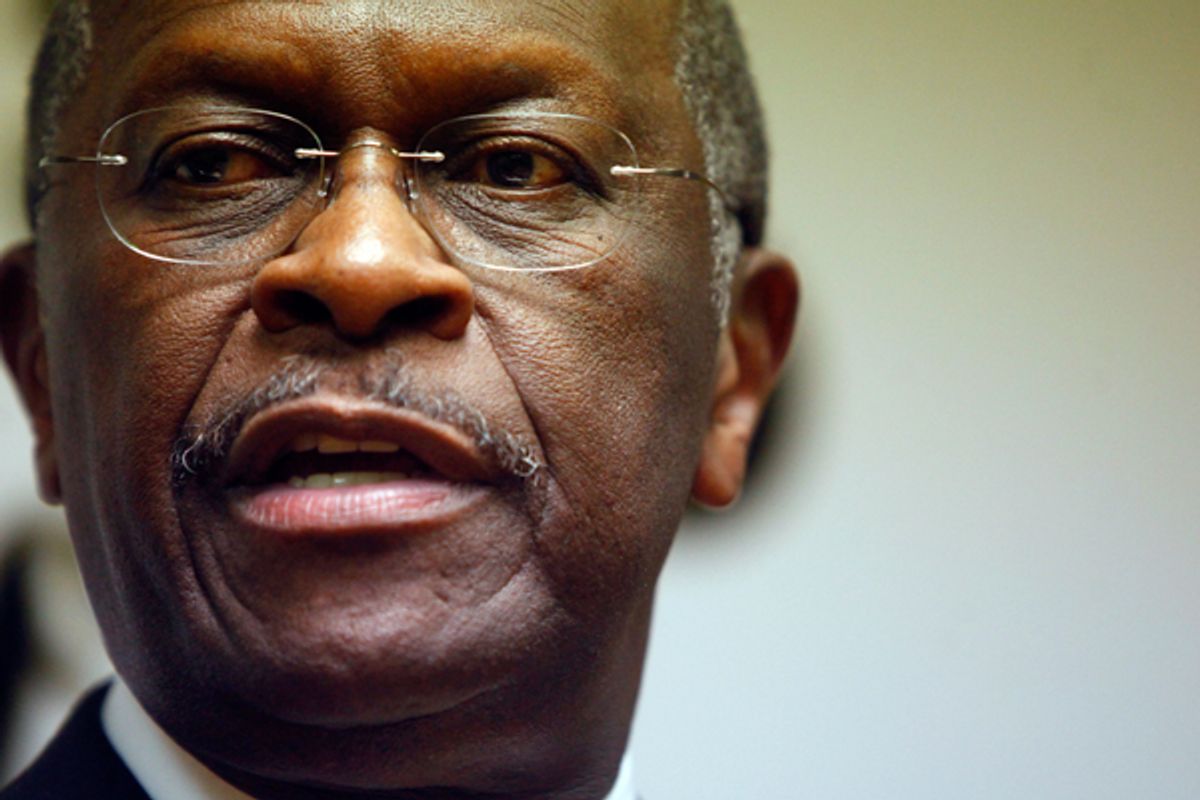 Whether Herman Cain actually engaged in sexual harassment when he ran the National Restaurant Association in the the late 1990s remains unknown.

His campaign manager insisted on MSNBC this morning that the Republican presidential candidate "has never sexually harassed anybody, period, end of story" -- but would only say that he's "not aware" of any cash settlement involving women who worked under Cain at the restaurant lobbying group. Using anonymous sources, Politico reported last night that two women had accused Cain of harassment and that they subsequently left the organization after receiving cash payments and signing non-disclosure agreements.

It seems clear that there is something to the story, since Cain's campaign initially acknowledged to Politico that allegations had been made and that the matter had been "settled." But, of course, that doesn't necessarily mean that Cain was actually guilty of anything. During the MSNBC interview, his campaign manager promised that Cain would address the issue today, although Cain refused to answer a question from a reporter while participating in a forum at the American Enterprise Institute this morning.

As I wrote earlier, it's possible this story will actually boost Cain's standing among Republicans;  if no further details come to light, he figures to find a sympathetic audience on the right for his claim that he's the victim of a liberal media smear. Still, it's a major headache for Cain and the threat to his candidacy is obvious. Which, as Dan Kennedy notes, is a different type of intrigue:

If details and/or names aren’t forthcoming, then the far more interesting story is who dropped a dime to Politico, and why. The site has a reputation for being well-connected to what’s left of the Republican establishment. No doubt there are elements within that establishment who want Cain out of the way as soon as possible. Is this the best they’ve got?

I can't help thinking of the Joe Biden/Neil Kinnock episode  from 1987 here. In case you've forgotten (or weren't around back then -- it's been (gulp) a quarter of a century), Biden borrowed rhetoric from the British Labour Party leader during a Democratic presidential debate that summer. He'd attributed the passages to Kinnock in previous speeches, but he didn't that day, although it went unreported at first. Then a few weeks later, three reporters -- Maureen Dowd of the New York Times, Ken Bode of NBC News and David Yepsen of the Des Moines Register -- all documented the plagiarism, with Bode airing a particularly devastating video. But Yepsen's version added a twist: The information and documentation had come from an "attack video" provided by a rival Democratic campaign.

This created a scandal within the scandal, one that ultimately had far-reaching consequences in the 1988 campaign. At first, suspicion fell mainly on the campaign of then-Rep. Dick Gephardt, who was the most immediately threatened by Biden's rise. (Gephardt was banking on a breakthrough win in Iowa and the debate had taken place in Iowa, where Biden seemed to be making inroads.) There was a presumption of guilt in the coverage, with several outlets all but fingering Gephardt as the culprit. Gephardt's campaign strenuously denied any involvement, and finally after about two weeks the press sniffed out the real source: John Sasso, who was running Michael Dukakis' campaign. Dukakis had adamantly denied involvement, telling the press that "anybody who knows me and knows the kind of campaigns I run, knows how strongly I feel about negative campaigning." In fact, Sasso had actually prepared the tape and authorized its distribution to the reporters.

Thus did the Kinnock scandal claim two casualties. For Biden, the fallout -- which included new scrutiny on his academic record that produced more damning revelations -- led him to end his campaign. But Dukakis, who was only beginning to emerge as the Democratic front-runner, also came in for plenty of abuse. Many doubted his claim that he hadn't known about Sasso's actions, and others called the timing of the attack -- Biden, as chairman of the Senate Judiciary Committee, was just about to lead the Democratic opposition to Robert Bork's Supreme Court nomination -- unconscionable. Thus did Dukakis sever ties with Sasso, who'd been his right-hand man for a decade and who had been instrumental in his rise to the national stage.

There are those who insist that if Sasso, with his strategic savvy, had stayed with the campaign Dukakis never would have squandered the 17-point lead he amassed over George H.W. Bush in the summer of 1988. Instead, Dukakis kept him frozen out until finally bringing him back well into the fall of '88, by which point Bush had ridden a barrage of attacks to a commanding lead of his own.

In the case of Cain, there was probably an incentive for any of his rivals to have leaked the sexual harassment story. But as Kennedy notes, that's also true for just about anyone in the Republican establishment, even those who aren't aligned with a particular campaign, who have plenty of reason to believe that Cain would be a disaster for their party as its nominee. So there's no shortage of suspects. And, of course, it's always possible the story came from somewhere else entirely.