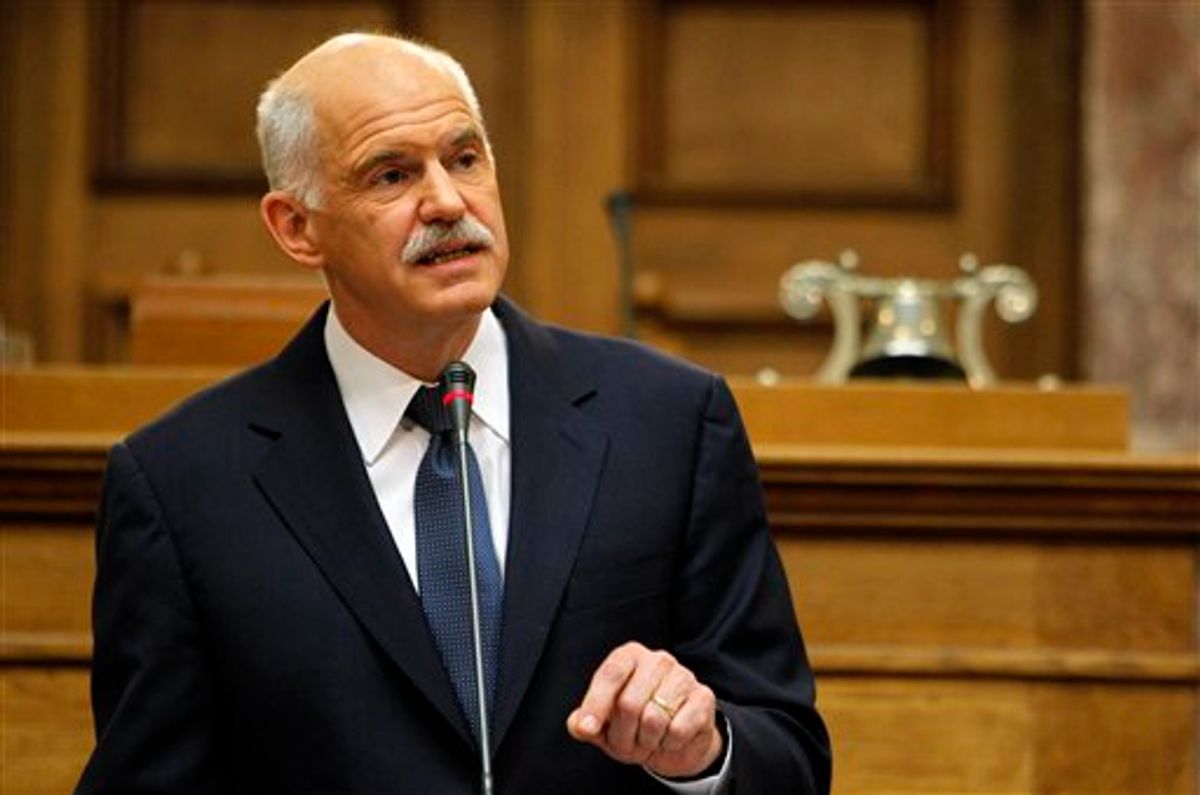 Papandreou, addressing the Greek Parliament, said, "Let each Greek person decide; with a ballot paper in his hand, let each person decide for his country and for himself."

Last week it seemed as if the Greek sovereign debt crisis had been more or less settled. Banks holding Greek bonds agreed to a 50 percent haircut — or write down of their value. In return Papandreou agreed to continue the austerity program he has initiated, shrinking the size of the public sector. This includes large scale lay-offs and clawing back of pension promises.

No date was given for the referendum, nor was it clear what the question would be. The Greek constitution allows the president to call referendums only on important, non-financial matters, the Financial Times' Alphaville blog notes.

Papandreou also announced a vote of confidence in his government to be held later this week.

The Prime Minister's political opposition, right and left, immediately denounced the plan for a vote. Instead they want the government dissolved and a snap general election called. The next scheduled election is in 2013.

At first glance the referendum is less about the bail-out deal than Greece's continued membership in the euro zone. Many opinion polls show Greeks are against the punishing austerity as a price for the bail-out. They also show Greeks want to continue to be part of the single currency.  But you can't be in the euro without the bail-out. So in a sense Papndreou is saying to his voters, make up your minds because it is put up or shut up time.

This is another example of how the lack of a political framework to back the single currency at its conception 20 years ago — its democratic deficit — is having repercussions today.  It's something Papndreou referred to directly in his speech, "It is not for others to decide but the Greek people to decide … we have faith in the people. We believe in democratic participation. We are not afraid of it."

Turmoil in Greece was the last thing the markets wanted.

The euro fell 2 percent against the dollar in New York shortly after Papandreou made his announcement.