How the LOT Polish 767 lost all three landing gear units is anybody's guess. Kudos are due to the well-trained crew 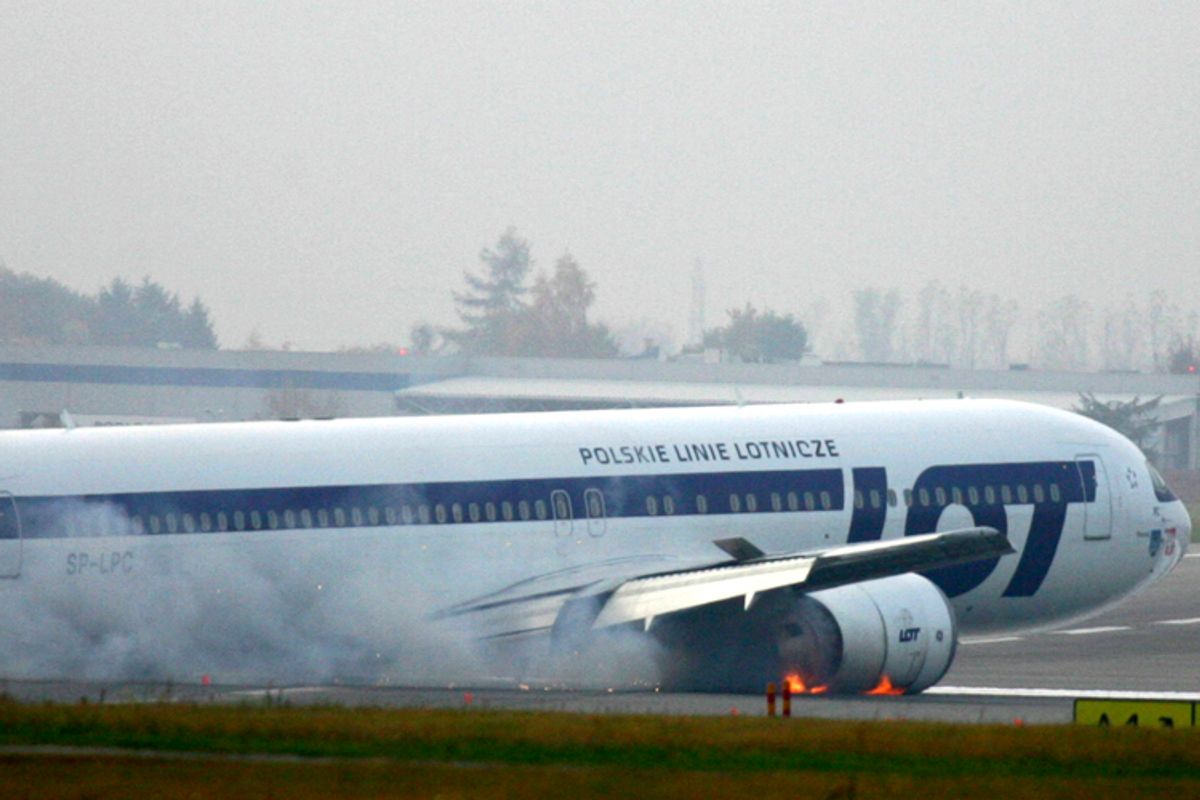 On Tuesday afternoon, a LOT Polish Airlines Boeing 767 made a graceful touchdown at the airport in Warsaw. The problem was, the plane had no landing gear. All three of the widebody jet's gear units -- twin main gear sets and a smaller set near the nose -- had failed to deploy, forcing a rarely seen belly landing.

Naturally the event was captured on video and became an Internet sensation even before the fire trucks had finished with their foam. How quaint seem the days, not all that long ago, when people would wait around excitedly for the nightly news in order to catch some grainy footage.

I'm somewhat loath to give this incident more attention than it has already gotten. Landing gear malfunctions tend to be splendidly telegenic, but rarely if ever are they going to end in catastrophe.

Back in 2005 we had the grotesquely overhyped saga of JetBlue Flight 292, an Airbus A320 that touched down in California with its nose gear twisted. This non-event, covered here and here, became a days-long media spectacle. In 2010 an ASA regional jet made an emergency landing in New York  after a main gear malfunction, and just last week an Iran Air Boeing 727 touched down sans its nose gear in Tehran.

What made Tuesday's LOT mishap different, and potentially more hazardous, was that none of the jet's gear had come down. The pilots would not have the opportunity to bleed off speed while balancing on one or more sets of tires. This increased the likelihood of a fire or serious structural damage, as both of the plane's massive engines would be sliding along the pavement at high speed. Directional control would also be more difficult -- probably the most challenging aspect of the landing.

Nevertheless, what we saw unfold is about what I, for one, would have expected to unfold. There were no casualties and I'm not the least bit surprised by that. There was lots of smoke, some sparking and grinding and maybe a quick shot of flame. But emergency crews had been standing by, and even if a fire had erupted it would have been doused within seconds.

The landing itself would have been perfectly routine up to the last second. From a pilot's perspective there's no real trick other than to touch down as slowly and smoothly and with the wings as level as possible -- not a whole lot different from a normal landing. Approach and landing speeds are determined by weight, not technique: The jet would have been comparatively light, having burned away most of its fuel during the long flight from America. Further dumping of fuel would have been impossible, as only the main (center) tank of the 767 has jettison capability and it would have been empty by this point.

The key to minimizing damage and injury in a situation like this is preparation. The aircraft circled Warsaw for several minutes, providing ample time for the pilots (there would have been at least three pilots in the cockpit) to troubleshoot (albeit not successfully), run their checklists, and brief the rest of the crew and passengers on what to expect. The flight attendants would have reviewed their evacuation procedures, stowed away loose items and made sure everyone was ready. On the ground below, fire and rescue crews got into position (as did the gawkers with their cellphones and cameras). Really this wasn't about pilot technique or seat-of-the-pants skills so much as preparation, coordination and good management of a crisis.

I am sure that many of the LOT passengers were saying prayers and scribbling out goodbye messages to loved ones, but the possibility of anybody being killed was minimal.

The million-dollar question, obviously, is how in the world did all three landing gear units of a modern commercial airliner fail to come down?

I wish I could tell you. I fly 767s for a living and I'm as mystified as anybody else. The plane has both a normal and alternate gear extension system. The normal system uses hydraulics, the alternate relies mostly on gravity, allowing the huge assemblies to more or less free-fall into place if need be. Neither of these, for reasons we'll learn soon enough, did the trick. Whatever the problem was, it seems to have been something pretty far up the chain of the systems' architecture, such that neither of two independent systems was sufficient.

The 767 has been in service for nearly 30 years, together with its little brother, the 757. The 767 is the much larger of the two, but otherwise these aircraft are extremely similar, sharing a so-called common type certification that allows pilots like me to be simultaneously qualified on both. In all the millions of landings these planes have made over the past three decades, nothing like this has happened before.

LOT, for its part, is a small but well-respected carrier with an excellent safety record. A freak malfunction? A maintenance mistake of some kind? We'll find out eventually. Until then, congratulations appear to be in order to the LOT crew, whose training and composure helped ensure a safe outcome.

The other big story from the past few days, meanwhile, was the JetBlue tarmac stranding at Bradley International Airport in northern Connecticut, where several JFK-bound flights diverted during the weekend's big snowstorm in the Northeast.

This topic makes me tired just thinking about it, and there's little I can say that I haven't said already in coverage of similar strandings, such as here and here and here.

One thing to keep in mind is that crews do not enjoy these marathons any more than passengers do. Unfortunately, they are more or less at the mercy of the staff who are overseeing and coordinating things, often from afar. Short of declaring an emergency, something for which he'd need to answer both to the FAA and his superiors, the captain cannot unilaterally decide to let people off the airplane and out onto a taxiway or an icy apron. Neither can he simply drive the plane up to the terminal and make use of the Jetway of his choice.

As for the idea of passengers taking matters into their own hands and initiating their own evacuation, as several emailers have suggested, I reckon that half of them would wind up breaking their legs or clobbering themselves over the head with their carry-ons as they plummet down the escape slides. Those slides are very steep and are not designed with convenience in mind. They are there to get a planeload of people out of and away from the aircraft as quickly as possible -- without their belongings.

That being said, does it need to be such an ordeal getting people from an airplane and into a terminal? Or, failing that, should it be that difficult getting adequate food, water and supplies to a stranded aircraft? Of course not.

Carriers need to better manage and coordinate these scenarios, and need to be willing to think outside the box. On the bright side, multi-hour strandings are extremely rare, especially now that airlines can face fines of millions of dollars per occurrence. There are close to 20,000 commercial departures every day in the United States and we see this only once or twice a year. But when they do happen, they always make the news and they're a public relations disaster. Not to mention terribly un-fun for those people stuck on the plane.