Conservative justices wink at their own conflicts of interest 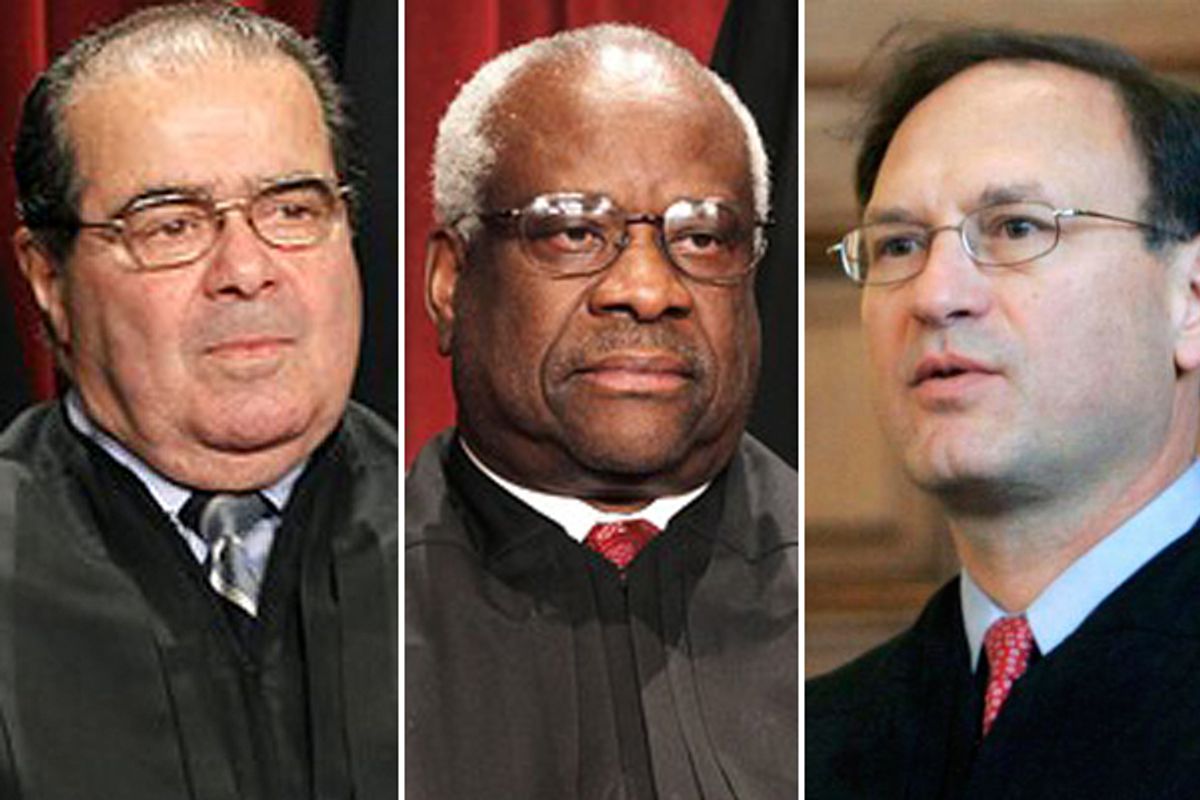 It is “do-as-I-say, not what-I-do” time at the U.S. Supreme Court. In a majority opinion in a 2009 case involving the conflict of interest of a state Supreme Court justice in West Virginia, Justice Anthony Kennedy wrote:

Courts, in our system, elaborate principles of law in the course of resolving disputes. The power and the prerogative of a court to perform this function rest, in the end, upon the respect accorded to its judgments. The citizen’s respect for judgments depends in turn upon the issuing court’s absolute probity. Judicial integrity is, in consequence, a state interest of the highest order.

By that standard, the Supreme Court needs to review the actions of three of its own members. And if the courts won't act, Congress should.

As Common Cause and Alliance for Justice have documented, the past activities of Justices Clarence Thomas, Samuel Alito and Antonin Scalia raise questions about the propriety of some of their extracurricular experiences. In September, the two groups, along with more than 100 law professors and ethicists, called upon Congress to require the nine justices of the high court to apply to themselves the existing ethical code of conduct rules covering all other federal judges, and to require them to publicly provide valid reasons rejecting recusal for alleged conflicts of interests. As the professors pointed out, the Supreme Court now has no policy on recusal. The justices simply decide for themselves if they have a conflict of interest.

At a time when all government officials are held in diminishing repute, one would think the Supreme Court would not need to be told that it, of all institutions, is not beyond the law and is subject to meticulous standards over which it alone should not be the exclusive decision-maker. A recent poll found 46 percent of the public approves of the Supreme Court; a favorable view higher than that enjoyed by Congress and the president but lower than at any time since 2001. Fatuous criticisms of the federal judiciary by the current crop of Republican presidential candidates exacerbate the image problem – important for an unelected body’s power of moral suasion, and compounded by real problems like this one.

Lawyers are reticent to question the judiciousness of judges trying their cases, for obvious tactical reasons. Most judges are careful about displaying their dispassionate distance from the matters before them. The system usually works, and the rules governing judicial conduct and conflicts of interests are there to assure uniform and fair standards. It is perverse that the highest court in the country is not covered by the same ethics rules governing all their judicial colleagues, all the more so when the justices themselves are the sole arbiters of these questions when they arise. A classic truth of judicial behavior is that no one should be a judge in his or her own case. Yet the court has no guiding comprehensive code of ethics. Its denials of challenges are not reviewable or sanctionable.

Don’t expect the justices to discipline themselves. When it comes to its own administrative behavior, the justices consider themselves their only judges. Claims for televising its public proceedings, for example, are denied because they do not want to be viewed publicly – to be recognized in the supermarket, one of them said. As the late great jurist Jerome Frank observed, the justices historically have protected their mystic aloofness. Even the more liberal, now retired, Justice John Paul Stevens recently dismissed the call for reform of recusal and conflict of interest rules as something that doesn’t concern him. It seems justices – even admirable ones - take their institutional arrogance with them when they leave the court. Stevens just doesn’t get it that “we know what’s right and wrong about ourselves” isn’t an acceptable attitude for Supreme Court justices.

The prevailing 1973 Code of Conduct for judges sets out ground rules for assuring integrity and independence of federal judges, avoiding partiality (and the appearance of it), prohibiting activities inconsistent with their judicial obligations, and barring economic or political activity by them or their families.

The behavior of Justice Clarence Thomas calls into question the code's rules about the private interests of family members. On the financial disclosure forms required of all federal judges Thomas failed for five years running to report his wife’s income of nearly $700,000 from the Heritage Foundation, the conservative think tank that advocates positions on matters before the court. Between 2003 and 2007, on the box for spousal income, Thomas checked the box labeled “None." When questioned about this, he corrected the forms, saying he didn’t understand the filing requirement of the Ethics in Government Act of 1978. Some answer for a Supreme Court justice!

And even that lame excuse may not be true. In a letter to federal court administrators last month, the Alliance for Justice and Common Cause reported that Thomas had properly filled out his forms and accurately disclosed his wife’s income as early as 1987, while serving as the chairman of the Equal Employment Opportunity Commission,  and then as a judge on the DC Circuit Court of Appeals, and then for five years as a justice on the Supreme Court. "These revelations call into question Justice Thomas’ explanation that his omissions were due to a misunderstanding of the filing instructions," they wrote.

Nor is Virginia Thomas' unreported income the only possible conflict. Justice Thomas also received valuable gifts and generated funding for personal pet projects from Harlan Crow, founder and activist for conservative causes. These activities might well be violations of Canons 4 and 5 of the federal judges' code.  As the Alliance for Justice has documented, Thomas and Scalia have appeared at private events sponsored by the billionaire Koch brothers that were “overtly political” and where the justice's attendance was used to lure a crowd. Justice Samuel Alito attended an American Spectator fundraising gala; the magazine's Conservative Action Project opposes President Obama’s healthcare program whose constitutionality will be decided by the court in the coming year. When questioned, Alito reportedly said, “It’s not important that I’m here.”  End of story.

The politically unlikely legal solution is the impeachment process, as established by Articles 1 and 2 of the Constitution. Since 1803 there have been 15 attempted impeachments of judges, mostly for crimes such as bribery and perjury. Two of the judges retired before Senate trials, and seven were removed after being charged by the House of Representatives and convicted by the Senate. The first and only accusation against a Supreme Court justice was in 1805, and involved charges of indecent remarks by Justice Samuel Chase. He was acquitted. The most recent impeachment of a federal judge (not a Supreme Court Justice) was in 2010.

Given the conciliatory nature of this president and the political character of the current Congress, there is no chance that Justice Thomas’ false financial disclosures will lead to his impeachment. But, imagine that there was a conservative president and Congress, and a divided, liberally tilted Supreme Court that voted 5-4 on most critical and controversial issues, and the one justice who voted consistently with the liberal majority had done what Justice Thomas admits he did: filed inaccurate financial disclosure forms and attended liberal political events. Would we be watching impeachment proceedings?

The likelihood of the Supreme Court itself modifying its present practices is remote. Unless, of course, it is pressed to do so by existing officials who, sensitive to separation of powers concerns, performs its powers of oversight, and the court is prompted to act on its own in order to preserve its administrative autonomy. That would be a proper and admirable course. In a recent piece for the Huffington Post, Nan Aron, president of the Alliance for Justice, urged the U.S. Judicial Conference, which has the power to investigate and refer violations of financial disclosure laws to the attorney general, to do so.  Violators are subject to civil action or criminal prosecution if the attorney general determines that the barred activity is done willfully. “The Supreme Court of the U.S., whose authority is rooted in perceptions of integrity and probity, has the lowest compulsory ethical standards in the government," Aron wrote.

The propriety of Justice Thomas’ actions could be assessed by the designated officials, and at least proscriptive guidelines for the Supreme Court might be pressed upon it. Questions to be considered are whether Thomas’ wife’s organization’s work dealt with matters before the court during the period her work was not listed on required disclosure forms. Justice Thomas predictably would have voted the conservative side, nonetheless, but there would be appearance-of-justice questions were this the case.

The clearest, least vindictive and most constructive approach would be for Congress to approve the Supreme Court Transparency & Disclosure Act (H.R. 862), which would apply the current Code of Conduct governing all federal judges to Supreme Court justices, provide transparency thorough disclosure, and set procedures to review independently the justices’ denial of challenges. The proposed legislation has a growing number of supporters, and the public should demand that its representatives vote for it, or reform will not come to the Supreme Court.