... and a potential corroborating witness who says what he saw would be enough to end Herman Cain's campaign 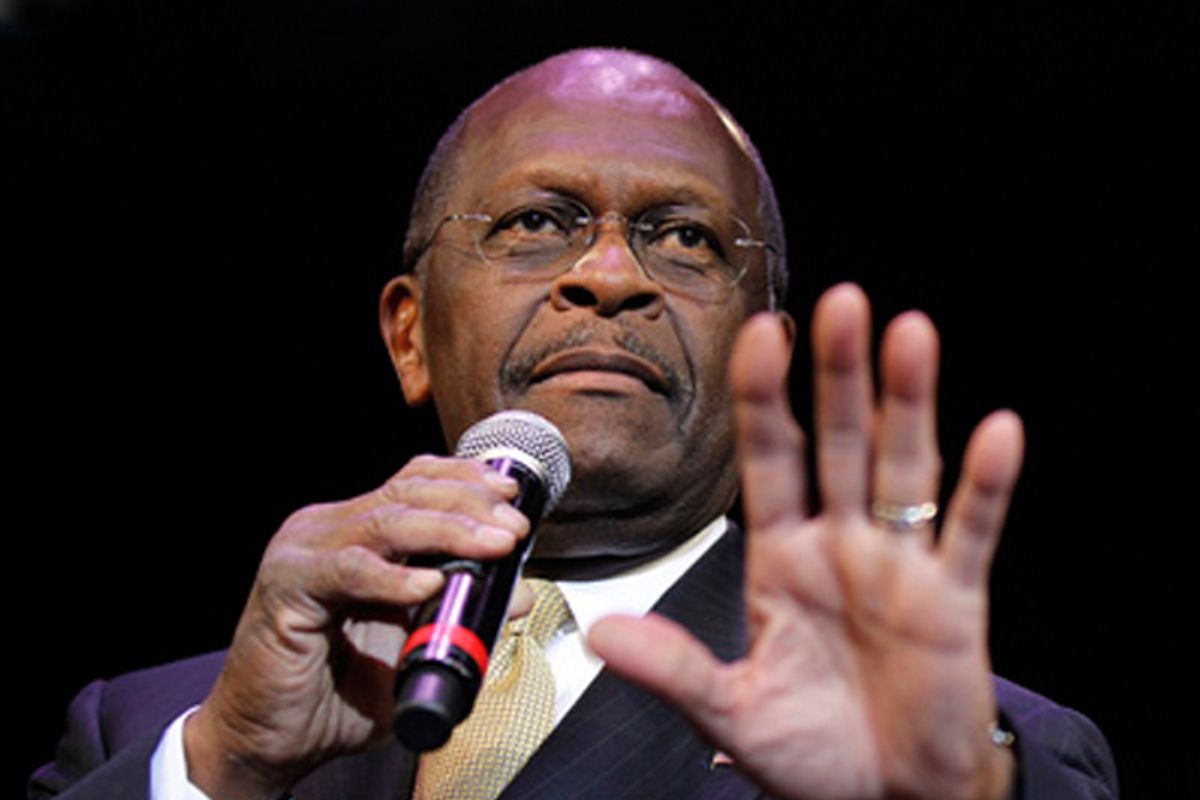 The Associated Press is reporting that a third woman who worked under Herman Cain at the National Restaurant Association in the 1990s now claims that he engaged in "aggressive and unwanted behavior" toward her, including an invitation to join him at his apartment. The woman, who was not identified by the AP, apparently didn't file a formal complaint at the time.

The revelation figures only to complicate Cain's efforts to downplay the significance of the sexual harassment complaints that were brought against him by two other women. So far, he's only acknowledged being aware of one complaint by and settlement with a former employee, claiming that his actions with the woman had been entirely innocent and that the payout she received amounted to the modest severance that any employee leaving on amicable terms might receive.

But the woman is now asking the NRA to waive the non-disclosure agreement she signed when she received the settlement, and her lawyer says she wants to come forward to tell her side of the story -- and to dispute Cain's insistence that he never engaged in sexual harassment. Earlier today, the NRA indicated that it had been contacted by the lawyer and instructed him to make his request through the group's outside counsel.

The New York Times also reported last night that another complaint against Cain resulted in a settlement of $35,000 -- equivalent to a full year's salary for the woman who made the accusation. Additionally, an Oklahoma-based political consultant who says he did polling work for the NRA when Cain ran it told an Oklahoma radio station today that he witnessed the incident that the woman now seeking to come forward complained about and predicted that if she's allowed to speak "it will be the end of his campaign":

Wilson described the woman as a low level staffer who was maybe two years out of college.  "This occurred at a restaurant in Crystal City (Virginia) and everybody was aware of it," he continued.  "It was only a matter of time because so many people were aware of what took place, so many people were aware of her situation, the fact she left---everybody knew with the campaign that this would eventually come up."

All of this comes a day after Cain's campaign manager declared the story "done." If nothing else, the steady emergence of new developments suggests that, one way or another, the details of the allegations against Cain will probably emerge -- eventually. It's worth noting, though, that the only poll conducted and released since the story first broke Sunday night shows Cain sustaining no damage, and maybe even building support  -- although the data come with several caveats.

Update: Now an Iowa-based conservative talk show host is accusing Cain of making "awkward" and "inappropriate" comments to two female staffers when he visited the station last month, adding that the fact that Cain's wife, Gloria, rarely travels with him is "a warning flag to me." This story is moving fast...