Are the floodgates about to open on the Herman Cain story?

One woman wants to speak out, another apparently got $35,000: A maddeningly vague scandal may be coming into focus 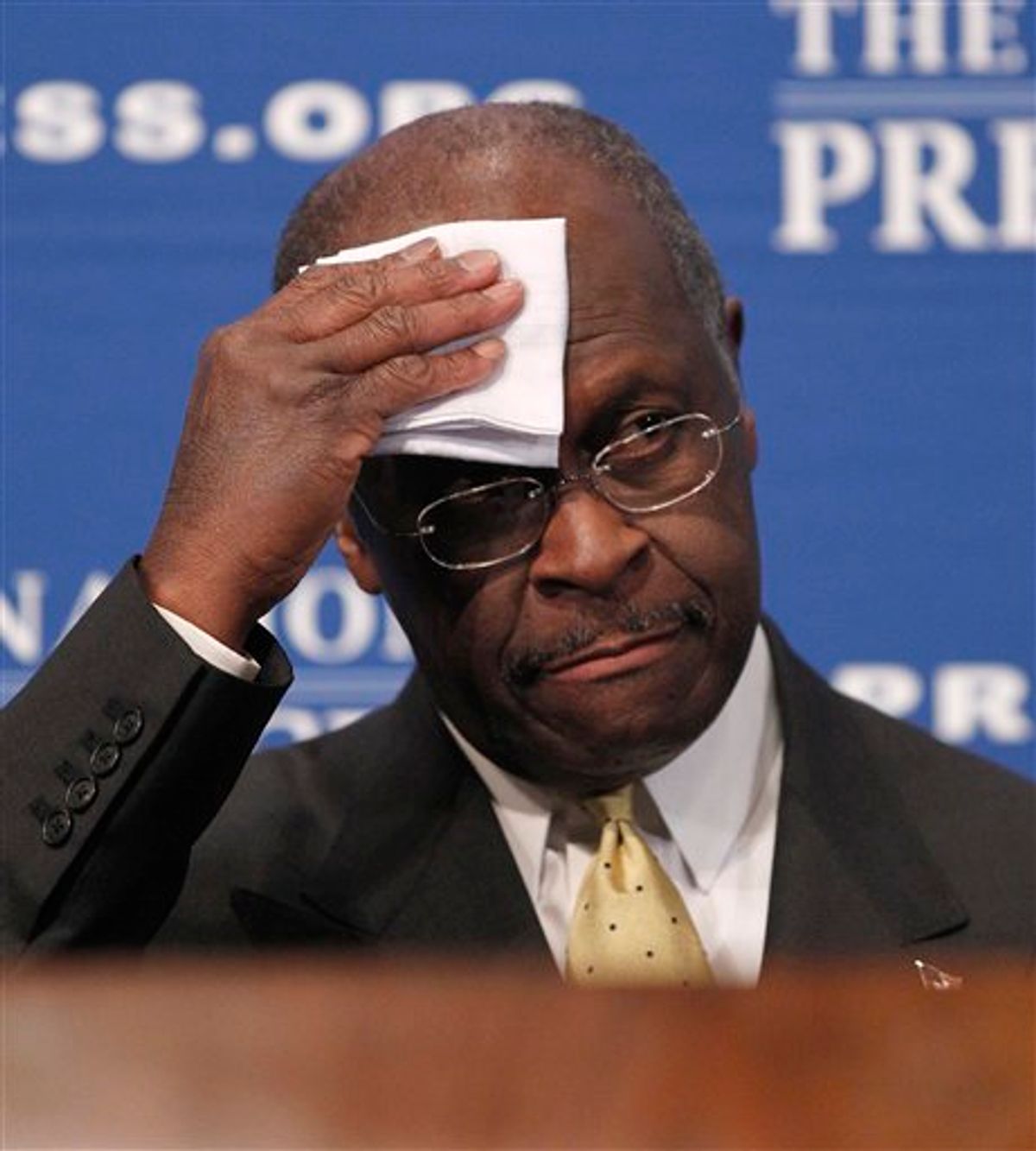 Republican presidential candidate, Herman Cain wipes his forehead before answering questions at the National Press Club in Washington, Monday, Oct., 31, 2011. Denying he sexually harassed anyone, Cain said Monday he was falsely accused in the 1990s while he was head of the National Restaurant Association, and he branded revelation of the allegations a "witch hunt.". (AP Photo/Pablo Martinez Monsivais) (AP)
--

The strange thing about the scandal that has loomed over Herman Cain's presidential campaign since Sunday night is that some of its most basic elements remain a mystery. The story that started all of this contained no names, no official confirmation, and no smoking gun documentation, and while we've since learned that Cain was indeed accused of sexual harassment in the 1990s and that at least one woman was paid a cash settlement, it's still possible that all he's really guilty of is acting like a guilty man.

But last night was a busy night, with one of Cain's accusers signaling her desire to come forward and with the New York Times reporting that a Cain accuser was given a severance deal worth an entire year of her salary. There may be light at the end of the tunnel and we may finally learn what, exactly, this scandal is about -- or whether it's a scandal at all.

Here's a quick look at the status of the major unanswered questions:

Politico initially reported that two women had complained of "sexually suggestive behavior by Cain that made them angry and uncomfortable" while he ran the National Restaurant Association in the 1990s and that both women subsequently left their jobs after receiving cash payments and signing nondisclosure agreements. But Politico also withheld the names of both women, citing privacy concerns. Cain has since acknowledged remembering one female NRA employee complaining about his behavior, but multiple news outlets have now also reported that there were complaints from two women and  two settlements.

We may soon learn one of the accuser's names, though. Her lawyer, Joel Bennett, announced last night that he is asking the NRA to waive the confidentiality agreement so that his client can come forward and tell her side of the story. "To the extent that [Cain] has made statements that he never sexually harassed anyone and there was no validity to these complaints, that’s certainly not true with respect to my client’s complaints," Bennett said on CNN last night. It's possible the NRA will accede to the request, but even if it initially balks, there could be enormous public pressure on the group to reconsider. After all, Cain -- who Bennett indicated is probably not bound by a nondisclosure agreement -- has been free to say her complaint was frivolous all week; isn't it only fair that she be permitted to air her side? Cain may not want her coming forward, but the P.R. damage might be worse if it looks like he's being protected by a legal technicality.

There's no indication yet that the other accuser is looking to come forward.

What exactly was he accused of?

This is the most confusing part of the story, at least for now, because while all indications point to the existence of two separate complaints, Cain has made it sound as if there was only one. He has denied ever sexually harassing anyone and provided this description of the complaint leveled against him by a woman:

Cain subsequently acknowledged that there could have been "a couple of other things" in this woman's complaint, but that "they were so ridiculous" that he doesn't remember them. It's unclear whether the woman who now wants to come forward is the same one Cain is referring to here.

The New York Times provided a little more clarity in a story published overnight. Citing anonymous sources, the paper claimed that the woman who now wants to come forward had been subjected to "'more than one' alleged incident that made her feel uncomfortable, while the second woman complained after an "encounter (that) had taken place in the context of a work outing during which there was heavy drinking, a hallmark, they said, of outings with an organization that represents the hospitality industry." The report suggested that the encounter with Cain was not the only reason this woman ended up leaving the NRA, but that it "added an emotional charge."

If the first woman is permitted to speak out, obviously, we should learn precisely what she accused Cain of. But even if she isn't, it may come out anyway, along with the second woman's story: That the Times and other news organizations have apparently succeeded in convincing multiple people with knowledge of the situation to provide some information -- albeit with the protection of anonymity -- suggests that it's only a matter of time before more comes out.

How much money were the settlements for?

This is a crucial question, since low-dollar amounts could buttress Cain's insistence that the complaints had no merit and that suggestion that the NRA simply made a pragmatic decision to handle a potentially ugly situation with quiet, modest payouts. But bigger totals could be more pragmatic.

On Monday, Cain said that he was aware of a payout to a woman that was equivalent to two or three months of her salary -- a relatively low total, in other words. Cain claimed that this amounted to offering the woman termination pay, a number that was "well within the range of what we would do if we had an amicable separation between the association and an employee."

But the Times reported overnight that one of the settlements was actually for $35,000 -- a full year's salary for the woman who received it. This, the paper noted, is an unusually high figure for severance pay, although the Times added that "other factors had been involved in her severance, and that other, less-loaded issues had been making her unhappy at the association." The settlement with the other woman (the one who wants to speak out), according to the paper, "appeared to be more in keeping with a standard settlement related to harassment allegations."

It may be that Cain, in his comments Monday, was accurately describing one of the settlements. But if the Times report is correct, it will certainly add to the impression that he's been less than forthcoming in addressing this matter.

Who tipped off Politico?

This seems to be everyone's favorite guessing game. Logic says that it was a rival GOP campaign or a member of the party's establishment who decided that Cain was getting a little too close to the nomination. On CNN last night, Bennett, the lawyer for one of the accusers, offered this: "My understanding is a present or former board member of the National Restaurant Association leaked the story to Politico." Asked how he knew this, Bennett replied, "I don’t recall how I heard that, but that’s my understanding of how the story originally got on Politico." For what it's worth, a quick check of the 2012 donation histories of the current members of the NRA's board reveals no obvious loyalties to any of Cain's rivals. But as Nate Silver points out, the NRA's former board chairman donated $2,500 this August to Rick Perry.