Defunding UNESCO for the 1 percent

Putting Israeli interests ahead of American interests begins to backfire 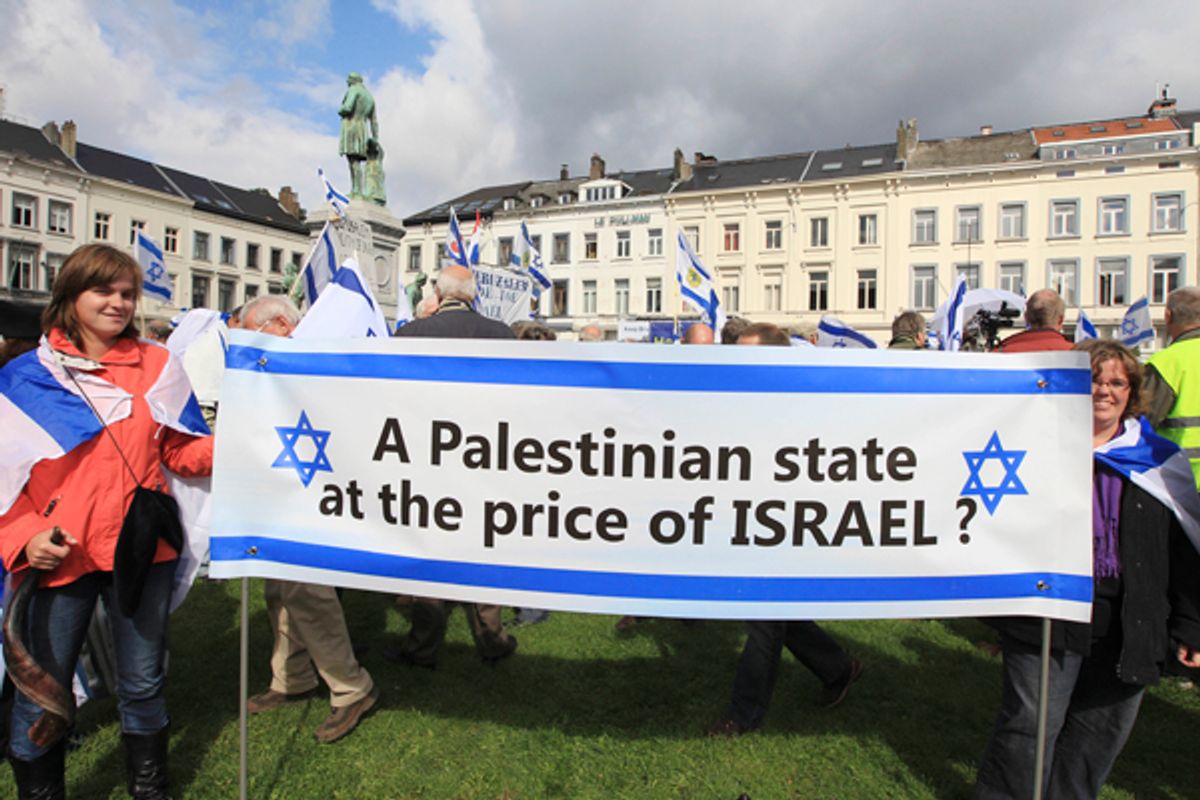 But there's another  99/1 percent divide: over U.S. policy toward Israel and the whole world.  Here the 1 percent are really on a roll.  Right over the rest of us.

This struggle concerns the American people's support for  the United Nations Educational, Scientific and Cultural Organization known as UNESCO. The organization does a lot of important work, including identifying and protecting World Heritage Sites, working to broaden educational opportunities around the world and helping poor countries get access to scientific information.

One could certainly argue that for a self-interested American, UNESCO isn’t crucial to U.S. national interests. One might say it does nothing more than make sure that tourist sites like the Cambodian temples of Angkor Wat or Australia’s Great Barrier Reef are still there when you want to see them. In fact, during the Cold War, Ronald Reagan pulled the U.S. out of UNESCO altogether; no one except maybe the historians, anthropologists, educators, cultural workers and a few insignificant others seemed to mind. It was almost a decade later that George Bush rejoined the organization.

And here we are again. This time the U.S. Congress announced it is withholding this year’s UNESCO dues, within hours of the global organization welcoming a new member: Palestine.  In certain basic ways, UNESCO (like the United Nations itself) is like every little kids’ club: You don’t pay your dues, you’re out. In her press briefing just after the Paris vote, State Department spokeswoman Victoria Nuland said the vote by the member states of UNESCO to admit Palestine as a member is "regrettable, premature and undermines our shared goal of accomplishing a comprehensive, just and lasting peace in the Middle East. The United States remains steadfast in its support for the establishment of an independent and sovereign Palestinian state. But such a state can only be realized through direct negotiations between the Israelis and the Palestinians.”

Kicked out of the club

Apparently the U.S. made the judgment that stiffing the organization, risking the likelihood of being kicked out on its unilateralist behind, is a price worth paying – to make the unsurprising political point that Washington is not happy about Palestinian statehood on any terms other than its own. Palestine’s right to membership in this particular world body means UNESCO can make the determination that Palestine, rather than its occupying power Israel, has the right to nominate World Heritage Sites in its own territory, such as the Church of the Nativity in Bethlehem. It may not be the “independent and sovereign Palestinian state” the U.S. claims it supports – but it certainly helps achieve a few of Palestine’s long-denied rights. And the 20 years of U.S.-controlled “peace process” has produced nothing for Palestinians except a tripling of illegal Israeli settlers on their land, certainly nothing remotely resembling a Palestinian state.

The decision to withhold the dues was in the interest of the foreign policy 1 percent -- Israel and its most hard-line supporters in the U.S. – not in the interest of the rest of us. In fact, there are potentially hazardous consequences ahead for a lot of us, including some of those who are most of the time part of the 1 percent.  Because achieving full membership in UNESCO is only the first step in the broader Palestinian plan at the U.N.

Other organizations will follow, and one of the first is likely to be WIPO, the World Intellectual Property Organization. WIPO is hardly a household word but it is an important entity. WIPO figures out how to protect patents, royalty arrangements and trademarks, so not only cultural workers but the biggest high-tech industries have a huge investment there too. That’s why the Obama administration convened a high-power meeting of corporate giants – Google, Microsoft, Apple and others – the day before the UNESCO vote, to see if they might have ideas to get out of the impasse.

It’s complicated, because this isn’t just a political decision by the administration to cut the funding. Congress passed specific legislation, dating back to 1991 and 1994, requiring the U.S. government to do just that – to withhold funds from any U.N. agency that recognizes Palestine on an equal basis with other states. And those laws didn’t include the kind of presidential waiver Congress often adds when it knows it's passing really stupid resolutions that are just for domestic political consumption. Like every year when members of Congress demand that the U.S. move its Israeli embassy to Jerusalem – something no country in the world does – they always include language that says “unless the President certifies that keeping the embassy in Tel Aviv is in the national security interest of the United States.”  That’s the out.

Who pays the price?

This time, there’s no obvious out. The problem is that if the United States has to leave WIPO, a lot of powerful corporations are going to be very unhappy. After WIPO, which U.N. agencies will be next to be defunded? Will it be the International Atomic Energy Agency, on whose reports U.S. strategists rely to figure out Iran’s nuclear power program?  If an IAEA member state doesn’t pay its dues, will it still have access to the agency’s classified reports? Will it be the World Health Organization, leaving the U.S. Centers for Disease Control outside of the global collaborations it depends on to fight the spread of devastating diseases?

And that’s all just talking about what affects the U.S. and Americans directly.  What happens to children – the world’s children, living across the impoverished global South – when UNICEF loses 22 percent of its budget?  UNICEF is probably the most popular U.N. agency in the United States; will this year’s Halloween trick-or-treat Pennies for UNICEF campaign mark the last U.S. money to support the children’s fund?

There has rarely been a clearer example of domestic politics – in this case, influence of the pro-Israel lobbies – undermining national interests.  Sen. Lindsey Graham, one of the most influential Republicans on foreign policy, said, "There's a lot of bipartisan support for cutting off funding to any political U.N. organization that would do this. What you are going to do is eventually lose congressional support for our participation in the United Nations. That's what's at risk here. That would be a great loss."  But while claiming to recognize U.S. interests in the U.N. agencies, Graham still plans to introduce a Senate resolution calling for withdrawal from UNESCO – or any other U.N. agency recognizing Palestine on an equal basis.  Graham is known as the most pro-U.N. among Republicans (admittedly a low bar). Yet as the Cable reported, “'When it comes to the issue of Palestinian recognition, the politics just don't allow any room for compromise,' he said.”

Of course, there is no partisan divide when it comes to supporting Israel’s insistence on no recognition for Palestine. The chairman of the Foreign Operations subcommittee, Democratic Sen. Patrick Leahy, said he was fine with cutting off the funds. “That’s what the law requires. It’s been there for 20 years and whether I support it or not, that’s the law,” he said.

And now that’s the challenge. Some in Washington may hope that Palestinian diplomats might offer a way out: agree not to apply for full membership in any more U.N. agencies in return for a settlement freeze and a return to some kind of negotiations.  But given the 20 years of failure of the U.S.-backed “peace process,” and with the Arab Spring empowering Palestinian civil society, increasingly mobilized in favor of an entirely new approach, one based on international law and human rights, on nonviolent civil society mobilization instead of failed “bilateral” negotiations, that’s not very likely.

The consequences of Washington’s pro-Israel policies have rarely been so clear. The Obama administration is going to have to show some real leadership to get out of the impasse, to recognize that this is a different era than 20 years ago, and there is a different Middle East facing the U.S.  That means that claiming to support a Palestinian state, while undermining Washington’s own support of and influence in vital U.N. agencies because they recognize Palestine as a state before we do, is not going to work.

Obama is going to have to recognize that it’s no longer – if it ever was – political suicide to break with Israel, and announce that since we support Palestinian statehood there’s no reason why U.N. agencies shouldn’t welcome Palestine as partners in protecting World Heritage Sites, or sorting out international copyrights, or helping to prevent global epidemics. If he has to challenge a couple of decades-old laws to do it, so be it.

We need the United Nations – at least 99 percent of us do -- a lot more than we need posturing about the alleged dangers of Palestine taking its seat in UNESCO. It’s time for the 1 percent to get out of the way.