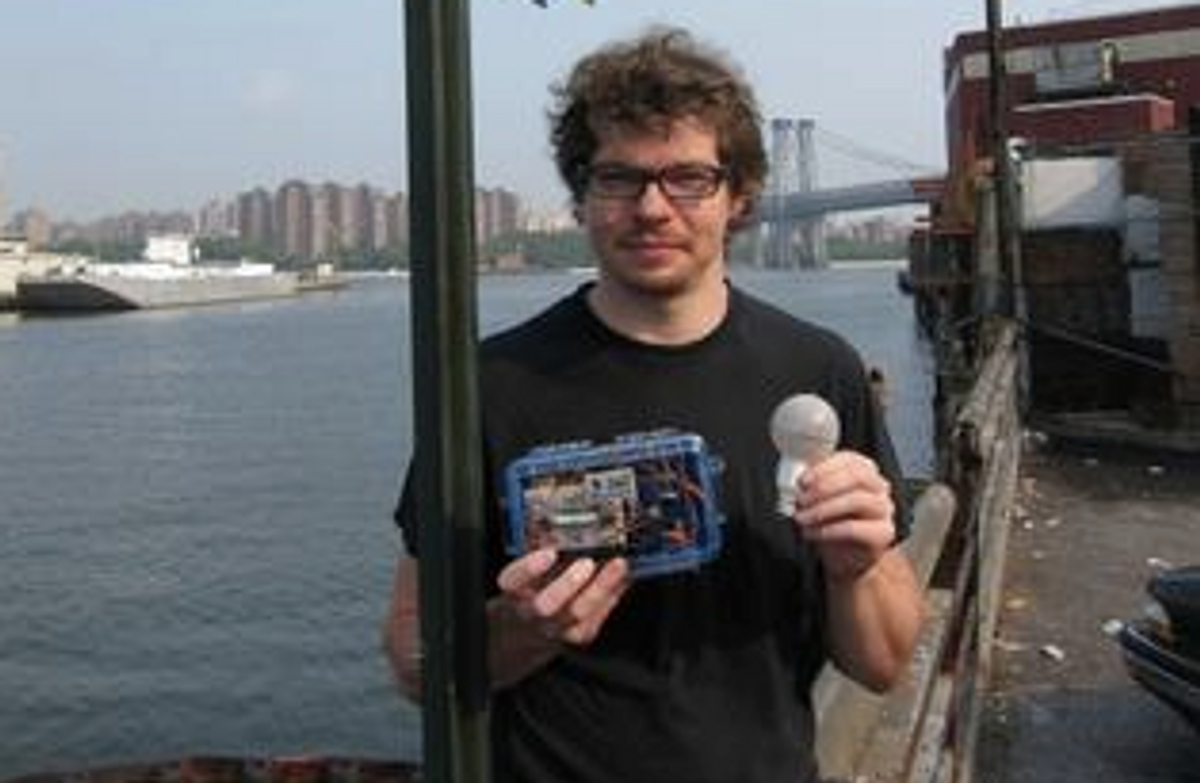 This piece originally appeared on Grist.

On a normal day, says Leif Percifield, New York City sewage travels from its point of origin to a waste processing plant. But when it starts to rain hard, the "astonishing volumes" of water pouring through the city's combined sewer-and-storm-drain network of pipes quickly exceeds the capacity of the treatment system. When that happens, the overflow sewage flows straight into the rivers and harbors of the greater metropolitan area.

Sewage overflow is the No. 1 source of pollution for New York's waterways, says Percifield, a graduate student at the School of Art, Media, and Technology at the Parsons New School of Design. But information on how often or when the overflows occur is in short supply. Percifield believes that if New York City's water users had access to timely information, they could adjust their behavior to cut down on the amount of actual sewage they send into the system at the very moment overflows are happening. Or at the very least decide to postpone that swim in the East River.

"The idea is to provide localized information so people can make decisions about recreational activity and hopefully encourage someone to postpone a load of laundry or washing a big-deal pile of dishes, or something like that, until the overflow has stopped," says Percifield.

Percifield's dream is to accomplish this by placing simple sensors at each of New York City's 490 "combined sewer overflow" points. The sensors will be primed to send out text-message notifications every time the city's drainage maxes out. Taking his cues from the open-source, do-it-yourself community, Percifield decided not to wait around for the city's Department of Environmental Protection to get on the job. He designed and built his own sensor. Then he climbed down into the sewer system to see if his hacked-together creation would work.

To create his sensor, Percifield took advantage of an easy-to-configure open-source piece of computer hardware created by the Arduino group in Scarmagno, Italy. A fast-growing sensation in the world of off-the-shelf programmable hardware, Arduino "enables people to take the tedium out of computing," says Percifield. There's no "black box" of proprietary hardware and software; with very little training, ordinary users can create interactive machines for a dizzying array of purposes. "People have developed all sorts of crazy things" on top of Arduino hardware, says Percifield.

Percifield's design hooks up a sensor and a cellphone to an Arduino microcontroller. When water levels rise to a certain point and trigger an overflow, the text message gets sent.

The idea is simple, but implementation has been a little tricky. The first time Percifield climbed down through a manhole to test his hardware, he discovered that the sewers' four-foot-thick reinforced concrete walls made cellphone transmission impossible. (He's currently tweaking his design to include an antenna that wires sensors to the surface.) Then the Department of Environmental Protection saw pictures of his escapades on Percifield's website and told him that they'd rather he didn't climb around in the sewer system without authorization.

However, the department has since been supportive of his overall plan, says Percifield. "They are not interested in providing any funding at this point for the project. But the biggest coup was actually getting someone to say, well, we can't let you go back into the sewer on your own, but we are willing to potentially help you install them under our guidance. Which was the kind of win I was looking for."

Percifield hopes his work inspires others to take advantage of readily available hardware and come up with inexpensive do-it-yourself projects for ameliorating other environmental problems.

"The idea is that the technology is simple enough and accessible enough so that anyone can understand it," he says. "If you decide something is a problem, you can do something about it yourself. And here are the tools to make it happen on your own."