This is how you toast misfortune

In 2008, I was laid off from my job as a contractor and didn't know how I'd pay the bills. Then came my bright idea 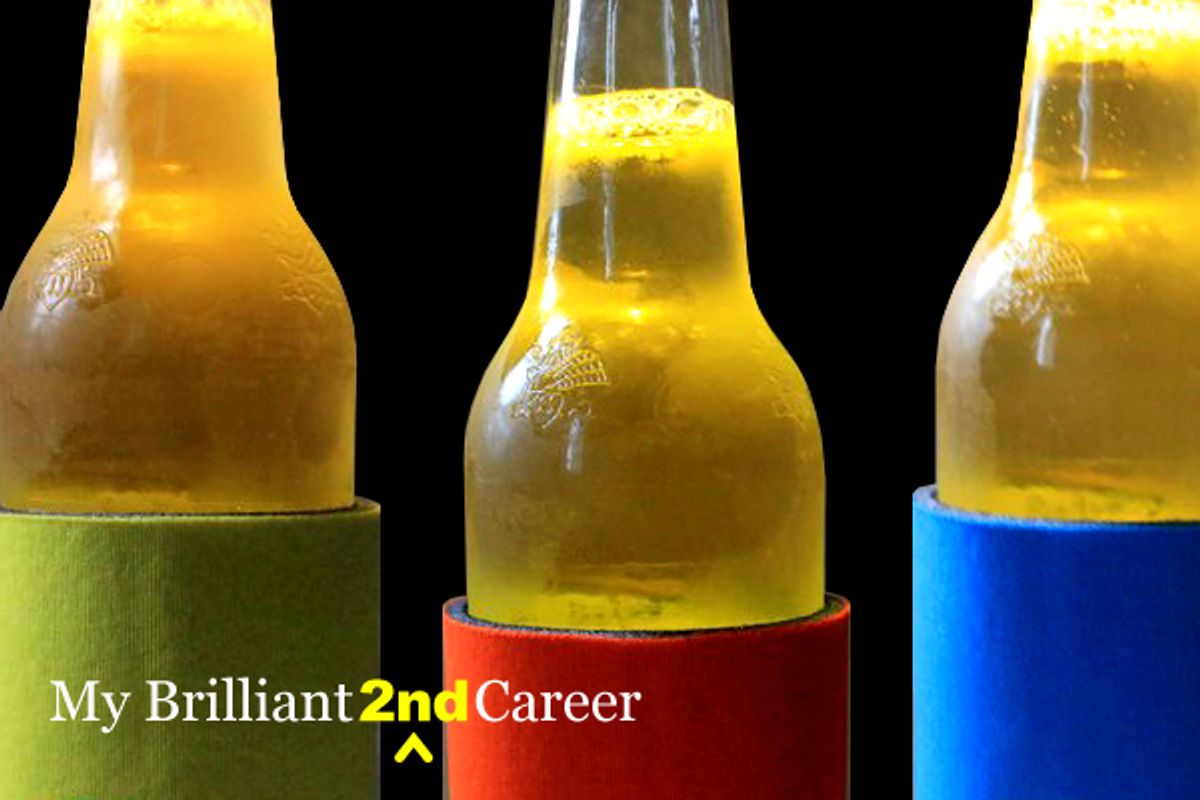 This is the first in a series about people who stared down the Great Recession -- and reinvented themselves along the way. Do you have a great Plan B success story? Post it on Open Salon, tag it "My Brilliant Second Career," and we might publish it on Salon -- and pay you for it.

My dad was a heating guy. As a kid, I'd help him out with his side jobs on Saturdays and Sundays. The profession was just second nature to me after school. I took a job at a place that put heating systems into new houses. But when the economy went bad, there was no new construction. When the layoff came, in 2008, my boss was straightforward about it. John's a really good guy. I understood it was what he had to do.

A few months later, I was home one night watching the Home Shopping Network. It was one of those late nights when I was trying to figure out how I was going to get the mortgage paid. At that point, I was doing pretty much anything for work. Driving a dump truck. Fixing furnaces. I would tell my wife and my daughters, "It's OK, everything's going to be all right," but I was worried. Anyway, the Home Shopping Channel was selling a laptop on a flex-pay plan. I thought to myself, "I'm going to buy this computer -- and I'm going to get a patent on my invention."

Almost 15 years ago, I invented this drink koozie. I'm also a volunteer firefighter, and they bought us these little flashlights that clip onto our helmet. They're really bright. We were sitting around a bonfire one night, and I was playing around with the flashlight, so I held it up to the bottom of the bottle I was drinking. The bottle lit right up, and it was beautiful. It dawned on me that, if a guy could put a light in the bottom of a koozie -- those little foam coolers that slip over any bottle or can -- he could light up any drink he wanted to.

I guess my inventiveness comes from being poor. I wouldn't have traded my childhood for anything, but there were times when other kids had cool toys and we didn't, so we had to be creative. Plus my father was a service guy, and going out with him every weekend, you had to figure out why the heating system wasn't working and how you were going to fix it. I've always loved tinkering. So I built a mock prototype of my invention in the garage. It had nine AA batteries duct taped around it, but it gave out so much heat it made the drink warm. It looked neat, but it had issues. So I put it on the back burner, because I was working back then. But sitting in my living room that night, I thought of it again. I knew since then they'd created LED lights that gave off no heat and had a long battery life -- and that was the key to my invention.

The next day, I told my wife, "I bought a computer last night."

You have to understand, where we live, in the Upper Peninsula, we're about 20 years behind the rest of the world -- in fashion, in technology, in everything. I knew absolutely nothing about computers when I ordered mine. My children never even asked for one. When they got home from school, we were on the four-wheelers or out fishing. But I knew if I was going to make this work, I would have to get out of this bubble.

Once I got the laptop, I taught myself to use it. I had a lot of time on my hands, and I wanted to use it productively. I looked up LED suppliers. I spent hours in patent discussion groups. In one of those, a gentleman mentioned something called a "provisional patent" -- it's for the working guy who thinks he has a good idea but doesn't have $10,000. Then I met this gentleman who was already in the koozie business -- he owns the patent on the koozies that look like shirts -- and he pointed me toward the company that manufactured his. Before long, I had three samples. My 401K took a pretty hard hit, but I still had a substantial amount in it. So I made another gamble. I cashed out my 401K, and I ordered 5,000 more.

I built my own website and sold a few on there. I went to eBay and sold a few on there. But this is a product people have to see. They have to see it in their hand, with the drink lit up, before they get what it is. Over the years I've wondered why people like it so much, and what I've come up with is this: You know how people are fascinated by fire? You can stare at it for hours. When people see this liquid glowing, it's the same effect. They're mesmerized by it. People are just drawn to light.

So along with my wife and kids, I started traveling around to music festivals here and in northeast Wisconsin. We paid $100 to set up our booth. During the day we would explore the town, and about dusk we would set up sodas and juice bottles and beer bottles. Once it started to get dark, people would flock over to our display area with wonder in their eyes and a million questions. And they'd come back the next day and tell us how their kid used it last night as a flashlight, or used it as a light on his bike. Meanwhile, I was approaching local businesses, local taverns, and the business was paying the bills. But the amazing part was how I went from working 40-50 hours a week away from my family to working 40-50 hours a week with my family. I didn't see that part coming.

The business was growing slowly. But I knew that if I could get this out to the masses it would take off. I needed an investor, or someone with connections. In the fall of 2008, I heard on the radio that Scott Kusmirek, the drummer for the Gin Blossoms, was playing a show nearby. He's originally from Munising in the Upper Peninsula. So I drove up to the bar with some koozie lights and gave him one. He thought it was really cool, and we talked for a while, but I never heard from him again. I kind of forgot about him.

And this is where -- I guess this is just the way things are meant to happen. This woman I had grown up with is now a Hollywood producer, and she's friends with Scott out on the West Coast. He was talking to her one night about how sick he was of his life out there, but he didn't know how he was going to move back home. She said she had this buddy with this cool business, maybe it would fit in with his music career. He said, "Oh my God, I met that guy."

The day he called me out of the blue, it was 9:30 a.m. on July 8. That's the anniversary of the day my mother passed on at the age of 52. She was the foundation of the family, our rock. So here it is, July 8, and I get this call from Scott. He says, "I'm heading back home, and I would love to help you with this thing." I don't think it was two weeks after he got involved that we were at the Playboy Mansion. From there, it just exploded. When I look back sometimes I wonder, why didn't he jump on board when I first met him? But I believe in my heart it's because I wasn't ready. My company wasn't ready. As a person I wasn't ready. For him to call on July 8, and for us to make that deal on that day, it was like a message from my mom saying, "You're ready. Do it."

Since then, the company has grown in leaps and bounds. We signed a contract to distribute to retailers like Wal-Mart, Costco, Meyer's. We have a deal with Our Entertainment, who orders them for all its music festivals. I've been working with this fashion designer M for his fashion stores, Haus of M. I just sold 1 percent of my company for $50,000. Going by that, our company is valued at $5 million. We've also branched into motor sports and entertainment and purchased part of a tequila company.

People always say to me, I can't believe you're the first person to invent a lighted drink koozie. But I guarantee you I'm not. I'm the first guy to do something about it. People have great ideas every day. I know I probably forgot more than I've written down, because life gets in the way.

I was comfortable in the heating business. I can't say I loved my job. But I was doing like most Americans, and probably most people in the world -- as long as your family is taken care of, you're kind of complacent. That's good enough. Now I encourage my daughters all the time: If there's something you want to do, something you want to be -- don't give up. You'll get it. I tell them, look at your dad. There's nothing special about me. I'm a normal average guy who had an idea and the determination to do it. Three weeks ago, I had the honor of meeting BB King. He signed my Epiphone guitar, which is now hanging on my wall. If you had asked me when I was a heating guy up here in Upper Michigan, was I going to meet BB King, I would have laughed at you.

There were times I thought it would be easier to go back to work for someone else again. One gentleman I worked with in the heating industry, he went out and opened his own heating company after the layoff. He was one of the few that basically told me, "You're living in a fantasy world. You ain't never gonna do nothing with that invention. Come work for me."

Now, it's kind of funny. When we came back from the Playboy Mansion, I posted some pictures on Facebook. Afterward, he called me up and said, "Hey buddy, how's it going? Hey, I was looking at your pictures. You wanna take me out there to the Playboy Mansion?"

I said, "Oh, you want to come live in my fantasy world?"

As told to Sarah Hepola

David Beaudette is the founder and CEO of Koozielight.