Could the GOP actually be turning on Grover Norquist? 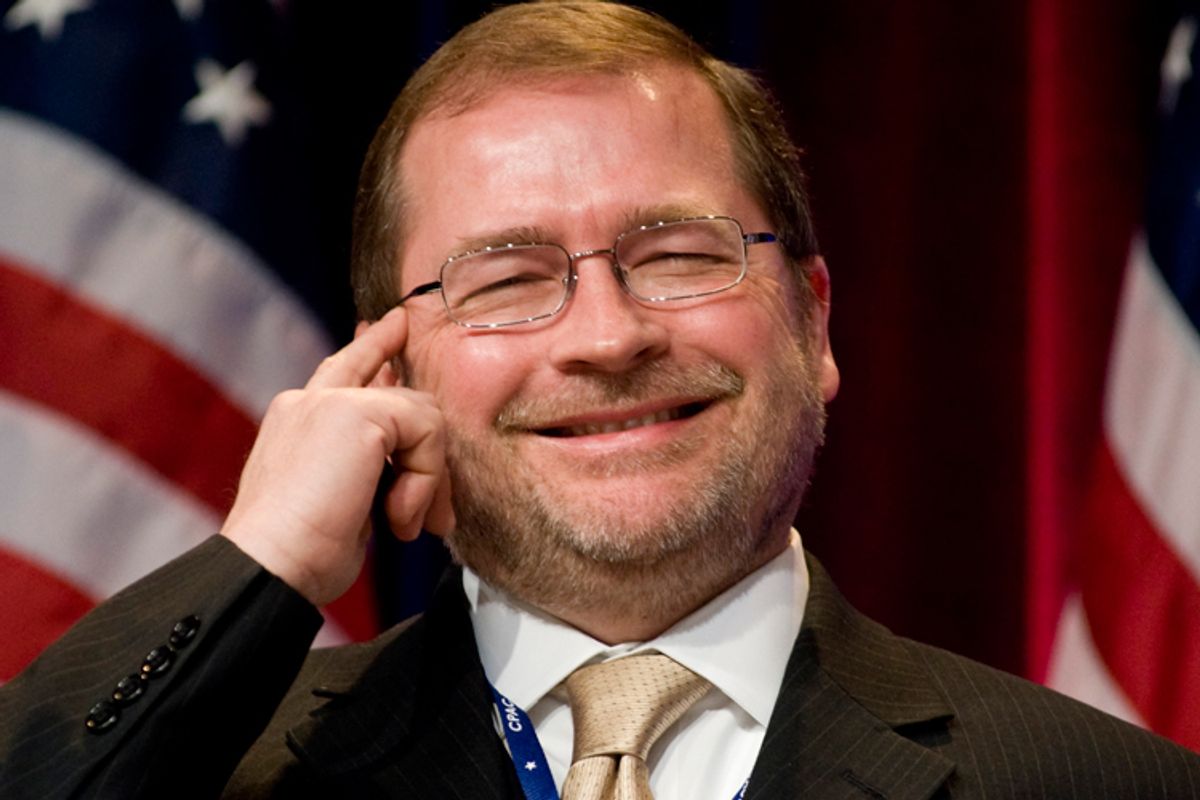 Grover Norquist, who runs a fervently anti-tax interest group in Washington, is best known for the simple pledge that Republican candidates for Congress have learned to ignore at their own electoral peril. Signatories vow that they will:

ONE, oppose any and all efforts to increase the marginal income tax rates for individuals and/or businesses; and

TWO, oppose any net reduction or elimination of deductions and
credits, unless matched dollar for dollar by further reducing tax rates.

In the 112th Congress, the GOP's positions has mirrored Norquist's: No net tax increases, ever. Which is why President Obama's efforts to strike a "grand bargain" during this summer's debt ceiling drama failed so miserably. Obama dangled cuts in Social Security, Medicare and Medicaid spending in exchange for Republican support for modest increase in tax revenues. The plan was to cut the debt by $3.5 trillion over 10 years and House Speaker John Boehner was interested -- until he discovered that signing off on the $400 billion in new revenues that Obama wanted might prompt a revolt within the GOP conference. So he walked away.

The same dynamic has thus far doomed the debt reduction "supercommittee" that was empaneled as a result of the debt ceiling compromise Obama and the GOP ultimately reached.

But now comes news that 40 House Republicans have joined with 60 Democrats to sign a letter to the supercommittee arguing that "all options for mandatory and discretionary spending and revenues must be on the table" and urging the panel to craft a plan for $4 trillion in debt reduction. Some of the Republican signatories aren't big surprises; Virginia's Frank Wolf, for instance, has been one of the few congressional Republicans to publicly challenge Norquist and his anti-tax adamance. But others, like Marlin Stutzman, a Tea Party favorite from Indiana who was elected last year, are.

There are two ways to read this development. One is that a significant number of congressional Republicans may finally be waking up to the fundamental incompatibility of Norquist's pledge with the sort of deficit reduction that they believe is essential. This could ultimately give Boehner the cover that he lacked during the summer and allow him to sign off on the kind of deal that Obama was offering.

But it's easy to get carried away. Saying that all options should be on the table during supercommittee discussions isn't that hard. Even Norquist says he's fine with the letter. "Consider anything," he told the Washington Post. "Just don't vote for a tax increase." If it ever starts to look like Republicans on the supercommittee are close to a deal with real tax increases, you can bet the pressure from Norquist and the talk radio right that we saw this summer will be back in full force. Let's see how these Republicans -- and how their congressional leadership -- reacts to that.

It's also worth remembering the posture that Eric Cantor, the No. 2 Republican in the House, took over the summer. He won headlines for expressing his openness to closing tax loopholes in order to raise new revenue, but his statement came with fine print that was aimed squarely at Norquist: Any new revenue from the closed loopholes would have to be offset by tax cuts elsewhere. If this is what Republicans who signed the letter have in mind, it does nothing to increase the chances of a deal.

The letter also raises some questions for Democrats, who face pressure from their own base not to make deep cuts in the social safety net. But "all options for mandatory and discretionary spending" would obviously include Social Security, Medicare and Medicaid. There are probably more than a few on the left who'd just as soon see the GOP stick to its anti-tax absolutism, lest a grand bargain that threatens these programs be struck.