I needed to know if I believed in this movement. So I took a break from my job and traveled 4,300 miles to find out 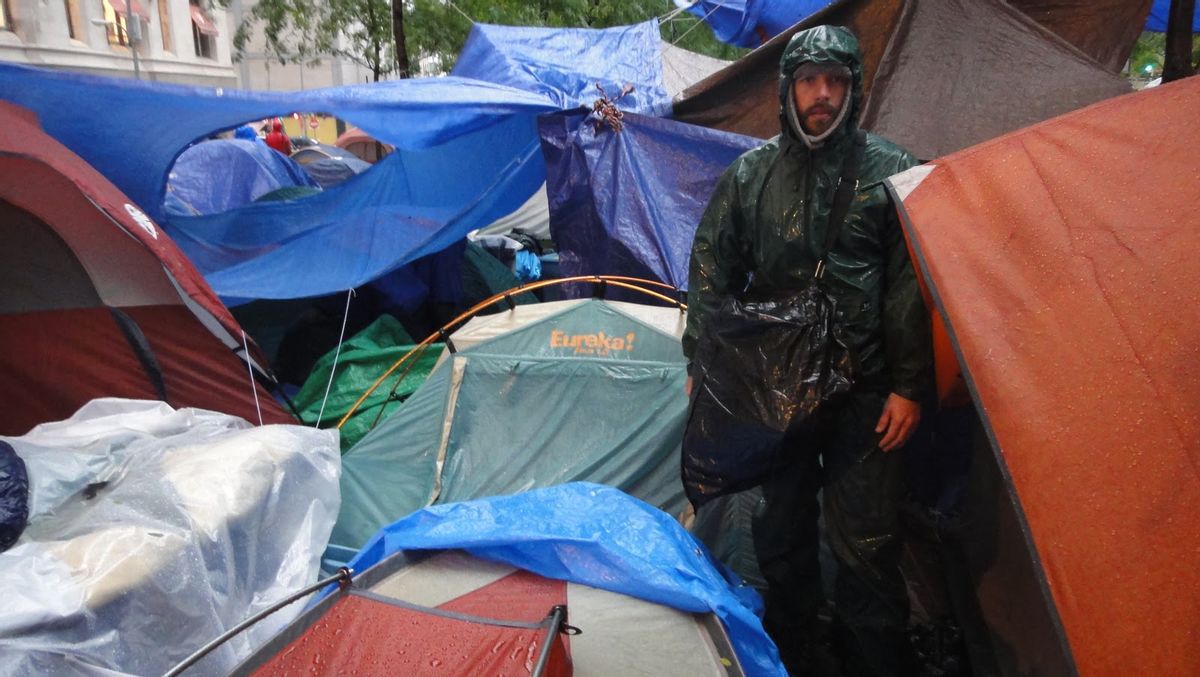 The author braves the rain at Zuccotti Park, as part of the Occupy Wall Street demonstration
--

“You want to know what I think of the ‘99% movement’? They’re the ‘Give Me Stuff movement,’” said Derrick, a 53-year-old mechanic.

I met Derrick during the five months I’d been washing dishes at a truck stop in northern Alaska. While he drove me five hours to the Fairbanks airport -- where I’d hop on a flight to New York -- he lectured me about my generation, who, according to him, were “a bunch of kids who don’t know anything about work or saving.”

Given that most occupiers were in debt because of tuition and couldn’t find work because of a crummy job market, he wasn’t entirely wrong. But unlike Derrick, I was inspired by these occupiers who’d had it with the corpulent Scrooges of Wall Street and the corporate scourges of America. Finally, here were people doing something about it, even if that “something” was a lot of sitting around.

So on Oct. 20, I arrived at Zuccotti Park, carrying a tent and sleeping bag, eager to see things for myself and excited to embrace the life of an “occupier” (if just for a week before I had to go back to work).

Zuccotti Park was smaller than I’d imagined -- only 33,000 square feet, little more than half the size of a football field – yet hundreds slept here every night, and thousands visited throughout the day. There were folded blue tarps, piles of backpacks, heaps of cardboard, and rows of sleeping bags laid side by side like body bags after a deadly battle. From afar, I heard the clatter of the drum circle and the clunking of construction. There weren’t any distinguishable smells except for a hint of grilled hot dogs wafting over from a nearby food stand. Thousands of tourists slowly wove around established sleeping grounds through narrow, curvy lanes. A gaggle of reporters, like hens crowding a poultry feeder, surrounded a man in a wrinkled shirt screaming something about how the Jews were to blame for everything.

I set my pack down, joined a long line leading to the kitchen, and got a plateful of rice, pizza and vegetarian chili before unraveling my tarp, sleeping bag and sleeping pad next to a group of occupiers. I fell asleep to the leaves fluttering on the honey-locust branches overhead and a homeless person a few feet away, softly muttering obscenities in his sleep.

As the week wore on, I got to know my fellow occupiers, as well as the ins and outs of the “occupying life.”

I attended educational sit-ins taught by local professors, went on a march to protest the NYPD’s racist “stop and frisk” policy, and made sweeping up the grounds with a broom and dustpan my morning communal duty. I grabbed a book from the “People’s library” and an extra tarp from the comfort station (where volunteers hand out clothes and camping equipment that have been donated to the occupation).

But the realities of occupying, I quickly learned, didn’t quite match up with my romantic expectations. Because porta-potties are banned from the park, I spent a good portion of every day frantically searching for a toilet or — when I happened upon a restroom in the city — straining to get “nature to call” as a preemptive strike against the digestive discomforts I knew I’d otherwise face later on.

For the most part, though, the occupying life is a simple life. Occupiers wake up whenever they want, work whenever they want, and eat food that’s served at most any daylight hour. Everything is voluntary, including the myriad marches and the nightly General Assembly meetings.

Most occupiers, I’d say, are there to protest, some are there for “the experience,” and others are just, well, there. This last group includes a lot of slightly crazy, slightly sketchy, slightly “I hope he doesn’t stab me in the neck when I’m sleeping” people in camp who, seeking a free meal and a place to stay, have little to no interest in the movement. It was these sorts of occupiers — the wackos, the drunks — who were treated like celebrities on the red carpet by the media.

On the other hand, regular everyday visitors would go out of their way to engage with occupiers who came for idealistic reasons. Even though I’d merely be sitting on my pack, several passersby would thank me for “doing what you’re doing.” One middle-aged male offered me ponchos, scarves and gloves, telling me, “This should have happened years ago. Thank you so much for believing.” I overheard a well-to-do lady lean over to her friend and say, “They need to storm the White House. They need to storm the Capitol. Seriously.”

I noticed the same thing over and over again: The first time that sympathizers visit Zuccotti Park, irrepressible grins spread across their faces. Perhaps they were merely amused with the festival-like ridiculousness of it all, but I detected something else. They were enchanted. This bedraggled, unkempt, scruffy-faced horde of occupiers had given people cause to — yes — hope.

Yet people here see what they want to see. Zuccotti is a Rorschach test, an ink blot that could, depending on your concern, end wars, put a stop to hydrofracking, or reinstitute Glass-Steagall. Enchantment is great, though it seems like it’ll only last as long as the possibility for actual change feels real. And, in this nascent stage of the movement, it’s easy for sympathizers to imagine that anything is possible. Yet without establishing substantive goals and winning clear victories, the movement might be frozen by winter doldrums. And while sympathizer and occupier alike agree that ambitious, long-range goals are necessary, it seems like  — for right now — it’ll be hard enough for occupiers to simply hold their ground, get through the winter, and establish stable communities.

On my third day, someone stole my sleeping pad. My neighbors complained that they were missing items, too. I’d heard rumors of heroin use and drug deals. Some regulars told me a woman was raped at knife point. Someone else, allegedly, was pricked by a needle used by someone who had AIDS. I had no way to find out if these harrowing stories were true, but there were enough shady people around to make me believe they could be. And while these shady few are in fact part of the “99%,” I couldn’t help thinking that these squatters were like particles of sand poured into a car engine. And unless the occupation, as a whole, challenges their happy-go-lucky egalitarian ideals and reevaluates the everything-goes anarchist strain of thought, the movement might only cough and sputter, and never get a chance to rev and roar.

On my seventh night in the park, the problems of Occupy Wall Street were coming to a head.

The temperature had dropped to 38 degrees, the lowest temperature since the occupation began, and because it had rained the night before, everyone was freezing, soggy and groggy. Many spent the day rigging up ropes from tree to tree in order to create a protective canopy of tarps, which, when completed, looked like tattered, patched-together pirate sails that did little more than dump the rain on someone else a few feet away.

I slept on several layers of plastic on the floor of my one-person tent, but the rain, with no place other else to go, pooled on the sidewalk, crept into my tent, and saturated my coat and sleeping bag. I woke up feeling as if I’d slept inside a moist orifice. The back of my jeans, also soaked, made it look like I'd had a terrible accident. I now had a cough, a runny nose, and a bump on the back of my head the size of a pea. The temperature felt like it was in the 20s, the rain was relentless, and the wind unwavering. I wrapped my laptop in a trash bag, went to the comfort station for extra clothes, and donned the only long-sleeve shirt available: a woman’s tan cardigan with loose, bellbottom sleeves.

Depressed and haggard, the occupiers had wrapped themselves in foil emergency blankets like greasy burritos. Extra tents were handed out, but several occupiers who didn’t get one would stand atop tables and deliver impromptu, half-crazed speeches. One squealed: “I’ve been here for four weeks! And I got nothing! NOTHING!” There were yelling matches; men got in other men’s faces and barked like frothing dogs before a vicious fight.

At night, the rain stopped, so I plucked my sopping wet jacket and sleeping bag from the tent and hung them on the ropes so they could dry in the wind.

The park was unusually quiet on account of the late hour and wintry weather. Looking around, I recognized that, during my mere week here, the place had transformed. Hardly anyone slept under tarps anymore; everyone bedded inside tents now. Waterproof mesh flags designated the various stations (Legal, Media, Information, etc.). There were even cardboard street signs celebrating influential thinkers (Bakunin Ave, Gandhi Way, Trotsky Lane, etc.). We had a Livestream station, as well as a giant projector, which we used to display our General Assembly discussions. There was even a “Children’s Safe Zone,” where parents could bring their kids.

I’d never been awake at this hour in Zuccotti, so it wasn’t until then that I discovered this late-night ritual: small circles of people would huddle together at night to talk. I sheepishly inched over to one group to listen in. Five 20-somethings were speaking with an old man with a curly beard and a fedora. He spoke reverently about the occupation, and told us to be persistent and not to become cynical like his generation had. Everyone listened carefully, mulling over his words, before offering their own thoughts on the movement.

One guy of Indian descent said, “Occupying Wall Street is great, but it’s not enough. We need to do something big. Something huge.” Another guy with a crew cut added, “My parents think I’m crazy for coming here. They were in the military and they’re brainwashed. They think the government’s going to fix itself, like it always has. They don’t realize how messed up our system is.” A girl with dreads chimed in, noting how incredible it was that the General Assembly just sent 100 tents and $20,000 of our raised money to the injured and incarcerated occupiers from Oakland (who’d just been violently evicted from their encampment), before going on a thrilling march up Broadway as a symbol of solidarity with people we’d never met, 3,000 miles away.

In this little circle, three ethnicities, two genders and two generations were represented. These occupiers didn’t fit Derrick’s depiction of the movement: They were neither slackers nor stoners, neither shiftless hipsters nor food-stamped freeloaders. They were smart, informed, articulate and passionate. They didn’t want “handouts,” just a government in which our representatives weren’t servants to special interest groups. And they cared about democracy — so much that they were willing to sleep in wet sleeping bags in near-freezing temperatures.

Still damp, I went back to my tent, wrapped myself in two emergency blankets, and struggled to fall asleep. I’d have to leave the occupation in the morning to go back to work. Despite the discomforts, the flaws and the freaks — I hoped the movement would last. I hoped I would come back. I hoped.