In an ironic twist, a plaza in a Deutsche Bank skyscraper on Wall St. has become a key meeting place for protesters 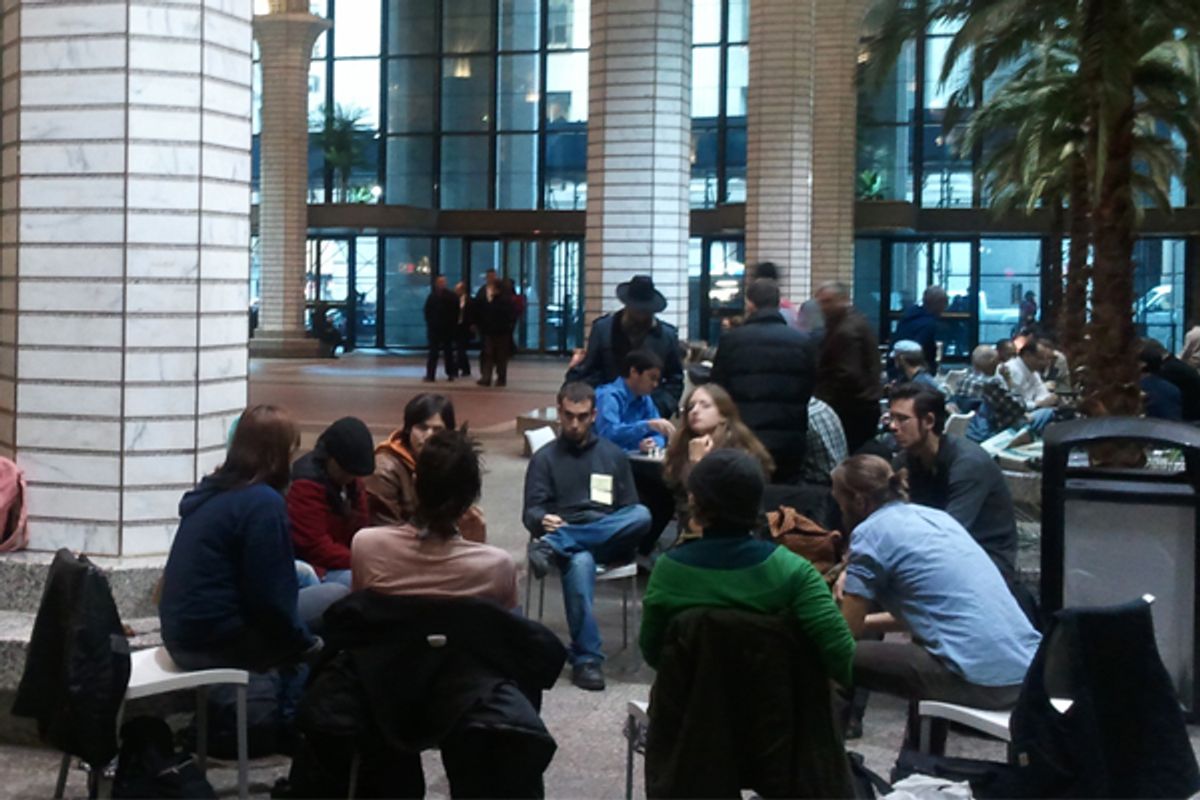 Occupy Wall Street's de facto headquarters is the atrium of a skyscraper that is home to a large bailed-out bank.

Various Occupy working groups, the key decision-making bodies of the movement, gather several times a day at 60 Wall Street, the North American headquarters of Deutsche Bank. Lined with palm trees and waterfalls, with direct access to shops and the subway, and -- crucially -- heated, the atrium is a respite from the raw, chaotic environs of Zuccotti Park.

The fact that Deutsche received bailout money -- which was news to several occupiers I interviewed at 60 Wall Street -- imbues the space with an ironic symbolism. A movement taking on global finance is now literally being run out of the ground floor of one of the industry's biggest players.

Deutsche Bank, which is based in Germany, received nearly $12 billion in taxpayer bailout money as part of the rescue loan made to insurer AIG in 2008.

Like Zuccotti Park, the atrium at 60 Wall Street is what's known as a privately owned public space. These are sometimes referred to as "bonus plazas" because generally developers receive a zoning benefit -- like an allowance for building extra floors -- in exchange for maintaining a public space.

In a so-called sale-leaseback deal in 2007, Deutsche Bank sold 60 Wall Street for $1.2 billion to Paramount Group, a large New York-based private real estate firm. Deutsche's North American headquarters remain in the 47-floor building on a long-term lease. Deutsche had purchased the building in 2001 from J.P. Morgan, the firm for which the tower was constructed in 1989.

During a visit Wednesday afternoon, at least three Occupy working groups were meeting clustered around tables on the atrium's west side, mixed in with bankers on their lunch breaks. One was the mobile occupation group, which is hatching plans for a collaborative bus tour to various Occupy sites around the country.

"It's a great space," says John Paul Learn, a 32-year-old Staten Islander who says the mobile group has been meeting at 60 Wall Street three times a week. He points out another big plus: free Wi-Fi, which is lacking at Zuccotti.

Asked about Occupy's use of the space, Deutsche spokesman Duncan King said, "The atrium is a public space open to everyone who abides by the rules." He said there had been no problems with the occupiers so far, but declined to comment further, including on the company's view of the protests.

Those rules, by the way, are posted at 60 Wall Street as: "No Loitering; Loud Boisterous Behavior Prohibited; No Excessive Use of Space; Pedestrian Ingress and Egress to Remain Clear; Leave/Erect Movable Property Law in Effect." One day when I was there last week a guard told protesters that they could not move tables and chairs; but another security guard told me Wednesday there had been no serious problems with protesters. NYPD officers are also typically posted in the atrium.

I've heard speculation from occupiers that the movement's presence at 60 Wall Street may expand in the winter months, as the need for a heated space becomes more urgent. It's conveniently located just five blocks from Zuccotti Park. It's not, however, an alternate sleeping place. It closes between 10 p.m. and 7 a.m. each night (though the small arcade outside the atrium is open 24 hours a day and offers at least a bit of shelter).

And the occupiers recognize that they are still operating with constraints that come with the precarious status of public-private spaces.

"If you don't have the real estate, you can't have the culture or the politics," says Bill Dobbs, a member of Occupy's press team.

"It's temporal," he says of 60 Wall Street. "It's under the owner's security and surveillance. It's also up against space limits. It's a very ad hoc arrangement."