Massive peaceful protests end with a late-night clash and arrests 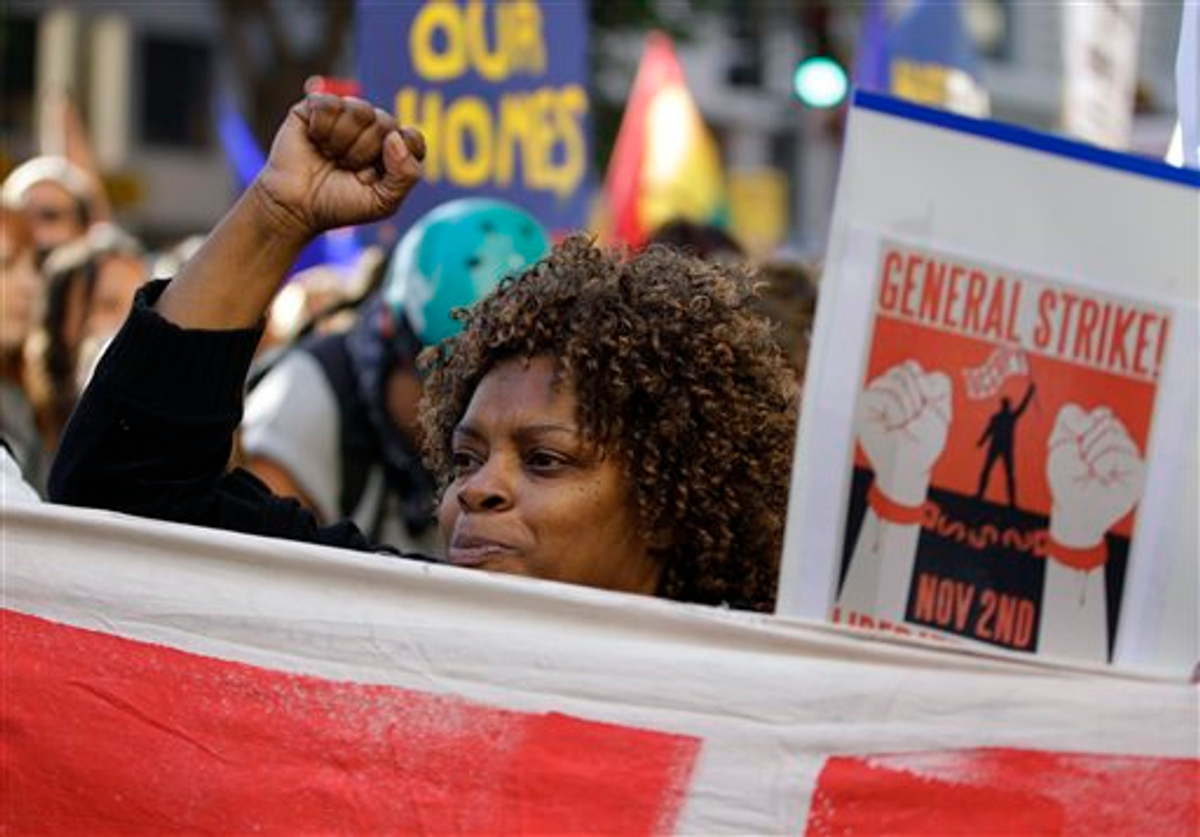 What began as a relatively peaceful day of demonstrations in Oakland on Wednesday ended in tear gas, rubber bullets and sound grenades being fired on occupiers. The Oakland Police Department arrested dozens of protesters who had taken over an abandoned building near the Oscar Grant plaza where the occupiers have an encampment.

The confrontation came at the end of a long day of festivities around a General Strike and a mass march on the Oakland Port. The Critical Mass bike activists led the march to the Bay, cycling in swirling formations in intersections along the way as they waited for the crowd to catch up. A bus took people who couldn’t walk the distance to the port, and teachers marched in solidarity with neon green T-shirts. By 9 o'clock Wednesday evening, the port, one of the largest in the country, was effectively shut down.

“Whose ports? Our ports?” the crowd chanted in the catch-all occupation meme.

Many protesters I spoke with had never been involved with direct action before Wednesday. Some had been edgy about coming to the march after last week’s raid and subsequent attacks on the Occupy Oakland camp that ended with several people injured and one cracked skull. Andrea, who has not been camping at the Plaza, said she was nervous, but that, “It’s important to make them know we’re not afraid. That mentality keeps people bound up in the lives they’re living.”

Oakland’s fear of armed authorities is entrenched in a culture of police brutality that receives what many locals consider easy punishment. In 2003, there was an effort to shut down the port that ended with the police using sting balls, concussion grenades and other non-lethal weapons.

Earlier on Wednesday, several marchers picketed banks, efforts that resulted in a few broken bank windows and furious tweeting: "Guy breaks window w beer bottle. Another guy yells 'that isn't what this is about." There was a big mess at Whole Foods, where workers were told they would face discipline if they joined the strike. Throughout the day, and even during the port shutdown, the police presence was small. After the reaction to last week’s attacks on nonviolent demonstrators, the cops seemed to favor  a minimal and subdued presence.

But after clogging up downtown Oakland all day, and stopping commerce in one of the U.S.’s largest ports, a core group of occupiers set their sights on the former headquarters of the Travelers Aid Society, a government-funded nonprofit that provided aid to houseless people in Oakland. The nonprofit, located a block away from Oscar Grant plaza, has been shuttered due to funding cuts.

The protesters reclaimed the property in accordance with the Occupy Oakland General Assembly’s vote to support such occupations. “We welcome the Travelers Aid Society to resume providing services in this building," stated a flier handed out on the plaza. "Otherwise, we will make it into a library and open workshop space for the people of Oakland."

Soon the occupiers were celebrating with loud funk music, break-dancing and cookies at the newly occupied building.  It wasn’t long before the police showed up in riot gear and gas masks. As many protesters fled, others built up barricades and set them on fire. The cops set off tear gas, and loaded dozens of protesters up in paddy wagons.

Boots Riley, a prominent activist-rapper, said the organizers had no communication with police when planning the strike or the port shutdown, saying that police reaction is never truly predictable.

At stake is the direction of Occupy Oakland. Since last week's raid, the size of the movement has more than doubled as its ranks swelled with union members, families and teachers, groups previously hesitant to join in. But many of these new protesters are also much more moderate than the anarchist core that first got the camp up and running. Occupy Oakland has heard a lot of debate around the use of violence and nonviolence, with peaceniks assuming the movement will be pacifist while other urbanites feel government-sanctioned violence against citizens should be resisted, even if it means engaging in self-defense.

After the use of non-lethal weaponry, the friction between the police department and protesters is unlikely to change. What remains to be seen: How will the newer, more moderate occupation community respond to last night’s events?