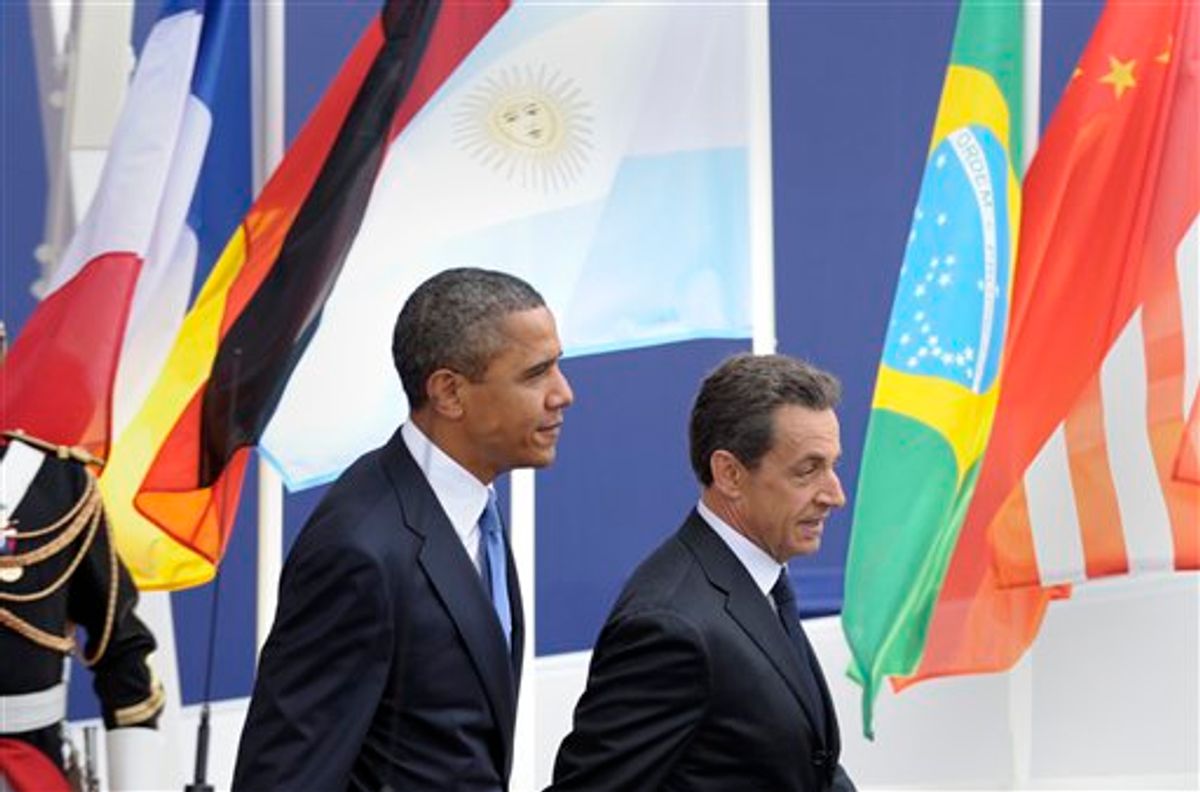 President Barack Obama said the most important task at the G-20 summit is to resolve the European financial crisis and urged European Union leaders to flesh out details of their ambitious plan to rescue Greece and stabilize financial markets.

French President Nicolas Sarkozy scrambled to save the summit he's hosting from being hijacked by the tumult in Greece. Sarkozy said he and Obama agree the private sector should play a greater role in helping resolve the global financial crisis.

"We have found a common analysis to make the financial world contribute" to finding a solution to the crisis, Sarkozy told reporters after talks with the U.S. president. He said he welcomed Obama's "understanding on subjects such as a tax on financial activities."

Sarkozy and some others in Europe have been pushing for a small tax on all financial transactions that could be used to help poor nations and reduce debts. The Obama administration and several leading economists are cool to the idea, favoring instead fees on the biggest banks.

Obama said he and Sarkozy discussed developments in Greece "and how we can work to help resolve that situation." Obama didn't give any details on what the U.S. might do in concert with its European allies.

"The United States will continue to be a partner with the Europeans to resolve these challenges," Obama said.

Sarkozy is also welcoming Hu Jintao of China as well as the leaders of India, Brazil, Russia and the other members of the G-20 in this city made famous by its annual film festival. But the event is far from the star turn the unpopular French leader had hoped to make six months before he faces a tough re-election vote.

European leaders held another round of emergency meetings Thursday morning about Greece, this time including officials from Spain and Italy — two major eurozone members whose debts have rattled markets and who are seen as too big for Europe to bail out.

All attention is on Greece, where the embattled Socialist government was on the point of imploding Thursday as a revolt against Prime Minister George Papandreou's planned referendum on the country's hard-won international bailout package gathered pace.

Papandreou shocked European leaders and world markets with the announcement of the referendum. Sarkozy and German Chancellor Angela Merkel admitted in a late night press conference Thursday that they see the vote as a Greek choice between staying in the 17-member club of countries that use the euro or getting out.

A "no" vote could be devastating. It could lead to a disorderly Greek default, topple fragile European banks and send the global economy back into recession — and would threaten the cornerstone of European unity and decades of work toward integration on a continent wracked by centuries of war.

Sarkozy and other top EU officials have long held that it was unthinkable for Greece to quit the euro because it would be, Sarkozy has said, "a failure of Europe."

European leaders tried pocketbook pressure, saying they would not release euro8 billion in previously approved loans to Greece — needed to pay government salaries and pensions — until the referendum results are in.

Greek Finance Minister Evangelos Venizelos broke ranks with his prime minister, saying "Greece's position within the euro area is a historic conquest of the country that cannot be put in doubt."

Venizelos said it was important for the next bailout installment to be disbursed "without any distractions or delay."

It's far from clear whether European leaders have worked out contingency plans for a Greek exit from the eurozone.

In case Greece does leave, "we are considering the issue of how we can ensure that no harm comes to our people in Germany, in Luxembourg, elsewhere in the eurozone," Luxembourg Prime Minister Jean-Claude Juncker told Germany's ZDF television Thursday.

A Greek euro exit would be "quite a disaster for the Greeks" but the rest of the eurozone would be able to swallow it, Deutsche Bank chief economist Thomas Mayer said, adding that it would "certainly weigh down very, very strongly the economic development" of the country.

"The country is small ... the banks, the financial markets have now adjusted to the idea that there will be a Greek debt restructuring. So we would survive this — it would in the first place be bad for the Greeks." he said on Deutschlandfunk radio.

U.N. Secretary General Ban Ki-moon urged the G-20 leaders to turn their attention to other pressing world issues, too.

"They should first of all, as leaders of this global economy, and global world, look beyond the immediate concerns — euro crisis — there are so many issues. Billions of people are going hungry to bed, and there are hundreds of millions of people who are sick, who need support," he told The Associated Press in an interview.

"I'm concerned about this deteriorating international economic situation and therefore leaders should show unity of purpose, and they should get united," he said.

The G-20 leaders are slated to discuss food security, reform of the international monetary system and the volatility of commodity prices — none of which is expected to get much attention or produce any solid conclusions at a summit so dominated by the European quagmire.

Anti-capitalist protesters have not been cowed by the European debt drama, and have staged demonstrations demanding a tax on all financial transactions, an end to tax havens and more aid for development.

Associated Press writers Elena Becatoros in Athens, Jamey Keaten in Cannes and Geir Moulson in Berlin contributed to this report.