A splinter group of protesters hijacks the day's action, cheering the political right 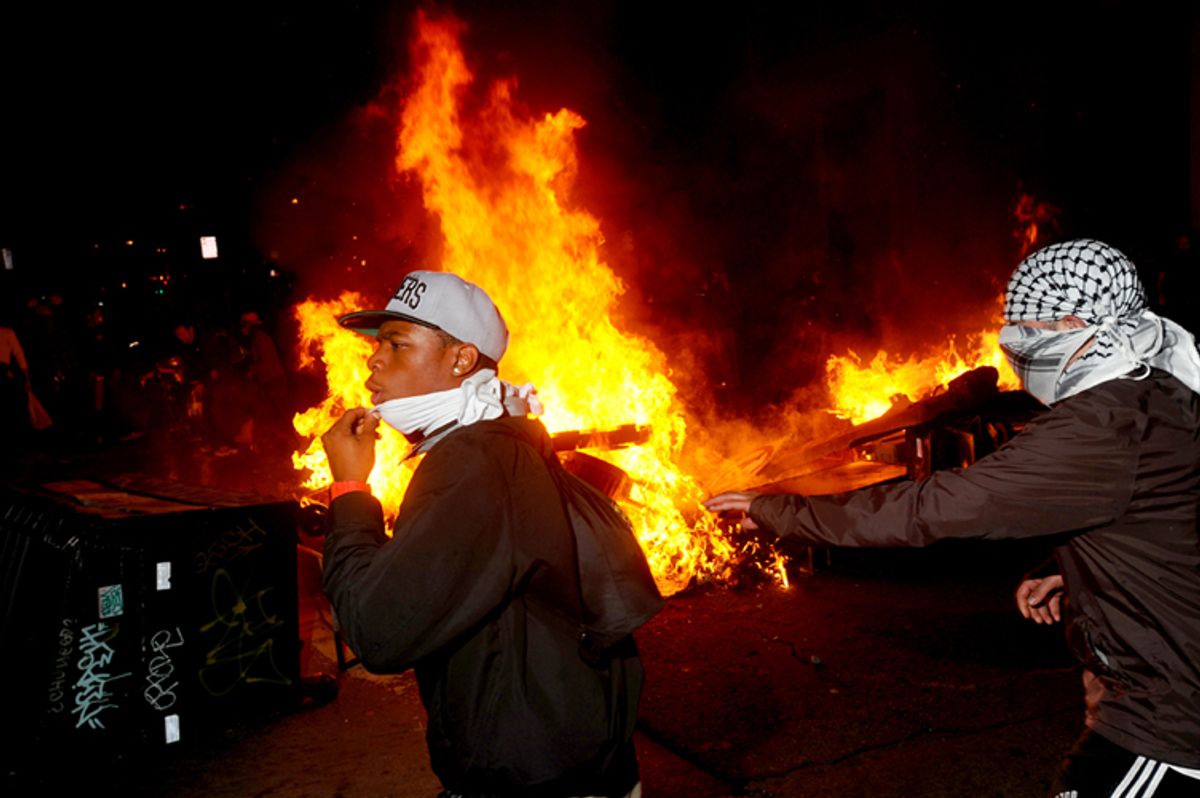 Thanks to a splinter group of protesters in Oakland last night, the news today is leading with imagery of burning barricades and headlines about property destruction.

The Times notes that this was a tiny portion of the thousands of Occupy protesters that marched in support of a general strike earlier in the day:

Tear gas hung over Oakland for the second time in two weeks after a small group of demonstrators faced off against police early Thursday following a peaceful march of thousands of Occupy Oakland protesters.

A roving group of about 100 mostly young men broke from the main group of protesters in a central plaza and roamed through downtown streets spraying graffiti, burning garbage and breaking windows. The police said some in the group briefly occupied a building on 16th Street near the port.

Check out Salon's account of the day here. Allison Kilkenny also has a good roundup.

Predictably, much of the media is focusing on the destruction caused by this small group of 100 or so. All this reminds me of remarks delivered by Naomi Klein, a vet of the '90s-era global justice movement, to Occupy Wall Street in New York early last month:

Something else this movement is doing right: You have committed yourselves to non-violence. You have refused to give the media the images of broken windows and street fights it craves so desperately. And that tremendous discipline has meant that, again and again, the story has been the disgraceful and unprovoked police brutality. Which we saw more of just last night. Meanwhile, support for this movement grows and grows. More wisdom.

The 100 or so young men (many masked) in Oakland have now produced those images.

And they drew attention away from the peaceful majority in Oakland as well as other peaceful, targeted actions yesterday, like a march on the Seattle hotel where JP Morgan CEO Jamie Dimon was speaking. Peaceful Occupy protesters were pepper-sprayed by police there to clear an entrance to the hotel.

As I've previously written, protesters who destroy property or attack police are playing into the hands of the movement's critics. Andrew Breitbart's website is already trumpeting this video of a few "black bloc" types trying to break windows and a fence at a Whole Foods in Oakland, while others in the crowd try to convince them to stop:

And here's how the day is playing online. These are not images that are going to help the Occupy movement accomplish anything.